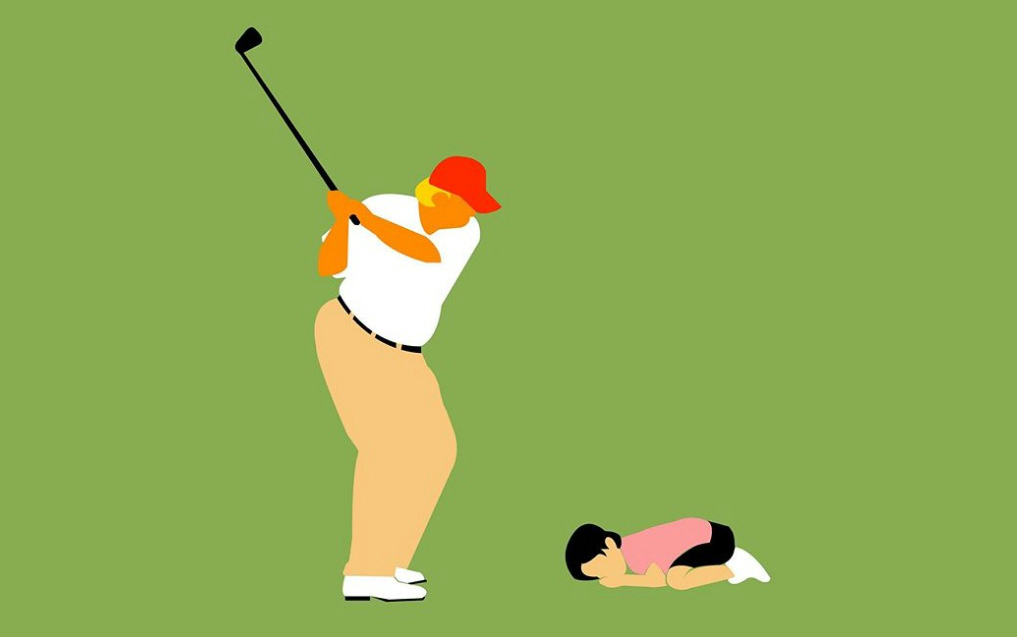 Rodriguez says he felt inspired to share the stark visual of Trump golfing over a prostrate immigrant girl when he saw footage of lawyers for Trump’s Department of Justice testifying before the Ninth Circuit last week that DoJ should not have to provide immigrant children held in federal detention camps with such basic provisions as soap, toothbrushes, and toothpaste.

“One of my fondest memories of arriving in America as a child was being given my own toothbrush, toothpaste, and soap by a soldier from the U.S. Coast Guard,” Rodriguez wrote in a caption to the image. “I then brushed my teeth and showered for the first time since I had left my home a week before. These small gestures make an impact. Whatever treatment children receive at this young age is something they’ll hold on to for a lifetime. How does America want to be remembered?”

In a conversation with Los Angeles, Rodriguez shared more of the story behind his compelling illustration and why watching the DoJ testimony stirred him to put his feelings into art.

“I saw this as part of the slow slide into a cold and detached fascism,” he said. “Something which has been very common in past dictatorships. The dehumanization of a certain group and how people in the system just follow orders from above, without questioning what they are doing. I think this is very dangerous behavior, and is happening with more frequency with people in the administration.”

He remembered a heart-wrenching photograph of a child held in an immigration center which had stuck with him. “I saw a photo of a girl laying on a concrete floor, not moving, and saw how vulnerable she was. Something clicked in my head, and I visualized Trump swinging his golf club. He keeps on golfing without a care as to what’s happening in the world.”

This isn’t the first time Rodriguez has used his work to challenge the current administration. He’s become famous for his covers of Time and Der Spiegel, blasting Trump.

Of his latest creation, Rodriguez says he’s encouraged by the positive reaction so far. “I started making the image and was surprised at how it even affected me to look at it. Once I put it online, I could tell right away that it was going to make an impact, comments and discussion started right away. I think the reactions are encouraging, people are outraged about what’s happening. I think my images make people feel that they are not alone in their sadness and anger about what has become of this country.”

He hopes his work will provide some kind of strength to people who feel threatened by the administration’s policies and tone. “I believe Trump is a sadistic personality. He revels in the humiliation of others, even children,” he says. “With Stephen Miller at his side in charge of immigration, this is a very scary time for many.”