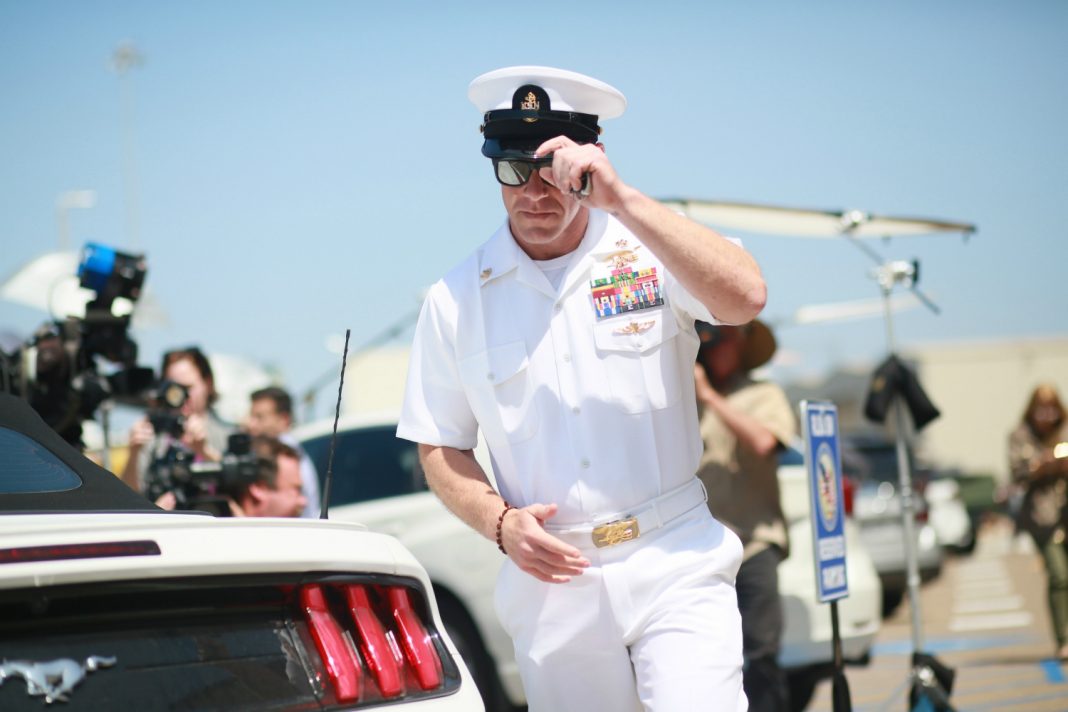 Court-martialed Navy SEAL Chief Petty Officer Edward Gallagher—who was found not guilty in the stabbing death of a young ISIS prisoner of war in Iraq, but was convicted for posing for a photo with the corpse (only to be granted clemency by Donald Trump)—is embracing his newfound popularity on the right and positioning himself as a lifestyle brand.

Navy Secretary Richard Spencer was asked to resign when he resisted Trump’s move to reverse a court’s decision to demote Gallagher and remove him from the SEALs after his conviction for violating the Uniform Code of Military Justice. Since then, Gallagher has been one of Trump’s biggest supporters, visiting him at Mar-a-Lago. The president recently called the controversial vet “one of the ultimate fighters” at a Florida rally.

Now, as The New York Times reports, the former SEAL is using his social media presence to stump for such adrenaline-infused products as the muscle supplement Total War and coffee company Double Tap, as well as a clothing company run by a fellow SEAL who designed the knife he was accused of using to stab the captive. That brand sells apparel emblazoned with slogans such as “KILL BAD DUDES” and a T-shirt boasting that its wearer is a “Waterboarding Instructor.”

“Trump is a master of casting, and Gallagher is a perfect fit,” says Paul Rieckhoff, founder of Iraq and Afghanistan Veterans of America. “He’s handsome, he’s heroic, he’s got a beautiful wife. He’s a Rambo version of the same story Trump has been telling over and over: The deep state is trying to screw you, the media is bad, and the rich people don’t understand you. But I’ll stick up for you.”

Gallagher and his wife also have an online shop where they peddle T-shirts calling the SEALs who testified against him “mean girls.”

Those “mean girls” called him “toxic” and “evil” in testimony to Navy investigators.

“I think he just wants to kill anybody he can,” said medic Corey Scott.

Before Gallagher’s trial, according to NCIS documents obtained by the Navy Times, another team member was expected to testify that Gallagher “killed four women.” A sniper on Gallagher’s team told NCIS that he witnessed Gallagher “shoot an elderly man in his 70s or 80s on Father’s Day, 18 June 2017.”

A Lead Petty Officer on the ground at the time of the alleged killing of the teenage captive also told Navy investigators that he witnessed Gallagher “stab the ISIS fighter multiple times in the right side of the neck” in a manner that “was in no way a medical procedure.”

Two members of the Iraqi Ministry of the Interior have told NCIS that the prisoner succumbed to gunshot wounds and was not stabbed to death.

Pre-trial witnesses also claimed that Gallagher threatened “to kill mother(expletives)” who leveled accusations against him, and told two lieutenants and another chief that he had incriminating evidence “on all of them,” and “would bring them all down” if they snitched.

Gallagher, who was also investigated for but never charged in the killing of a young girl in 2017, maintains that his accusers within the elite SEAL teams are subpar performers, jealous of his success. And the stony former soldier is continuing to fully embrace the man who rescued him from disgrace despite the judgment of his brothers in arms.

Salon politics writer Amanda Marcotte is of the opinion that the story of Gallagher’s rise as an admired figure on the right has much darker implications: “On its own, the story of Eddie Gallagher’s sudden metamorphosis into right-wing culture hero may feel like an odd little trend piece. Considered in the larger context of history, it’s about the growth of American fascism.”