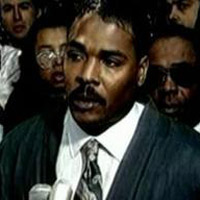 For a long time after I’d written a profile about Rodney King for the Los Angeles Times Magazine in 1999, I kept a message he’d left on my answering machine. I erased it accidentally about four years after it was recorded, but I still remember it—how earnest, gentle and hesitant his voice sounded, such a contrast to the PCP-crazed inner-city monster that the jurors bought at the 1992 Simi Valley trial. “Hey, Ed. It’s Rodney, a little late. Yeah, I think I am going surfing this morning. I’m not going as early as I thought I was, but if you want to come, give me a call.”

I was about halfway through reporting my article. I had first encountered King years before when I covered the federal retrial of the officers accused in his beating. When I approached him about the profile—he had not consented to anything much since the riots—I was in luck, though chagrined about why I was in luck. King had launched a hip-hop label, and here was a means to promote it. He had signed a group called Stranded, and he laid on me a few of his own raps: “nevah, evah, forget where you came from, we all came to chill, and just to have fun.” It seemed another dismal decision that would further deplete the vestiges of his multimillion-dollar settlement with the city.

I did call King back that morning and hang with him for some time in the waves. We met at a coffee shop near his home in Upland and drove together in his Suburban. Along one stretch of the freeway, he pushed above 85 mph. “Heavy foot,” he joked, and quickly eased off the pedal. In the water, he became less distracted, stopped tripping over his words, and relaxed long enough for a good conversation. The locals at San Onofre loved him, told him how when it had gotten to be too much they had paddled out and straddled their boards and looked over at smoke from a city set ablaze following the Simi verdict. Not a surfer myself, I bobbled nearby as King negotiated some small swells on his longboard, unsteady on the fiberglass but in as calm a state as one could see him then or after. He would never have been able to cope with the stress of his peculiar, fast-metastasizing fame, even if the beating hadn’t inflicted so much blunt-force trauma to his brain that neither medication nor therapy could completely alleviate it. Whatever chance he had of overcoming alcoholism receded as the screw-ups, embarrassments, and occasional rages of that emphatic public figure called Rodney King eclipsed the uncertain, rudderless, poorly educated construction worker he’d been the night of the beating.

I guess I wasn’t prepared for the amount of hatred that greeted my article, published seven years after the riots. The sight of King on the cover of the Times magazine, grinning in the sun with the surfboard under his arm, wearing his bathing trunks low enough so that Tommy Hilfiger’s name was legible on the waistband of his underwear, enraged most readers, and led to quite a few canceled subscriptions. Most letters to the editor were along the lines of this one: “Perhaps there is something redeeming about this disgrace to humankind, but I don’t know what it is.” Shortly after the piece came out, a good friend was at a sporting event with a group that happened to include an executive with Hilfiger’s company, who seethed about the repulsive appearance of the brand on King’s midriff.

Over the following years I cringed over morning coffee at the inevitable news stories about King’s latest domestic altercation, traffic stop, or mishap that purported to show how degraded he was. Few stories reached the level of absurdity of the woman who called the cops because a black man was running down Brand Boulevard in Glendale, carrying a purse—it was King carrying his then-wife’s purse, trying to make it to L.A. Cellular to pay a late bill. I found myself fantasizing that somehow King could be convinced to take what little he still had and move to a town in France, where he could be free of the city that misshaped him and the notoriety that continued to bleed him.

You know the kind of people who spend their lifetime trying to good, and it just doesn’t happen when they want it to happen? King’s cousin Avarette explained to me when I was researching the article. Well, Rodney is that type of person. Still, he did more good than most would have when so much was at stake. Despite the damage that had been inflicted on his body and his brain, King pleaded with the rioters to stop the violence they had started in his name. Answering his own question about whether we could get along, he told us there was no choice. “We’ve just got to, just got to,” he said. “We’re all stuck here for a while….” He lived his next 20 years in a state of torment all out of proportion to the flawed, ordinary, never fully formed but well-intended man he was. Given those limitations, and the burden the beating and a bystander’s viral video placed upon him, he reached oblivion too soon, but could any of us have done any better?