Home Uncategorized East vs. West: Is L.A.’s Greatest Rivalry With Itself? 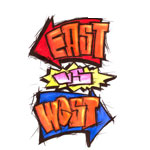 KCRW’s Which Way, L.A.? last night aired the argument you’ve been having with that friend who moved to the other side of town and has been hard to make plans with ever since: Eastside versus Westside.

Over the course of the show, KCET’s Juan Devis and D.J. Waldie, KCRW’s Hunter Drohojowska-Philp, and writer Brian Finkelstein, music archivist Eric J. Lawrence, and cartographer Eric Brightwell talked about the historic roots of L.A.’s great divide, the art and music scenes on both sides of the city, and the ethnic diversity that may or may not unite us.

Overall, the cross-town barbs were duller than we expected. Brian Finklestein threw down for the Eastside by making fun of West L.A.’s earnest attitude towards fresh fish and fitness. “We all eat sushi. We all do yoga—we’ve all agreed on that,” he said, “but it’s a culture when you come to the Westside; everyone has to say namaste.”

Eric Lawrence’s big comeback: “If you live here long enough you sort of get the satisfaction of being a Westsider, and you sort of understand that there is a certain level of jealousy involved.”

Call-in listeners also had a chance to weigh in. Here’s how they see East and West L.A. stacking up:

My take? When a panel of city experts can agree, as this one did easily, that L.A.’s creative output comes from all parts of the city, it’s time to A) work together to solve the problems that plague us all and then B) refocus our sense of superiority back where it belongs—you know, outside the county limits. It’s a big country and we may all be Americans, but we’re not all Angelenos.