Early in-person voting in the California presidential primary kicked off in Los Angeles County this morning. Hundred of new “Vote Centers” were scheduled open their doors at 8 a.m., and many will remain open for eleven days until votes are counted on March 3. With the recent debacle at the Iowa caucus much on their minds, officials pledged to keep the process orderly and trouble-free. But early reviews have not been heartening.

In a series of tweets this morning, people complained that Vote Centers scheduled to be open were actually closed and, in cases where the centers were open, that the new touch-screen machines were malfunctioning or missing altogether.

Went to two voting centers this morning. Turned away from both locations. First one the brand new tablets were broken (West Knoll in Weho). Second place the equipment has not been delivered yet (Plummer Park). Fearful of what I'll discover at third center. Stay tuned. @CASOSvote

Got turned away from 2 early voting centers this morning: Montecito Heights and Lincoln Heights. The excuse was that they didn’t have the proper supplies. At the Lincoln Heights center they offered us provisional ballots.

Their frustration was echoed by a poll worker who was hired a few weeks ago to monitor voting at a location in the San Fernando Valley. The poll worker, whom we’ll call Jerry to protect her anonymity, offered a running play by play of missteps and mixed messages that suggested that the electoral process in California may not be as efficient as advertised.

When she showed up for training earlier this month, Jerry, a woman in her ’70s, was told she would be assigned to one of the voting locations that would be open for 11 days and that she would work all of those days. She cleared all other plans and engagements and waited to find out what polling station she was to report to. But then, confusion ensued.

On Thursday, February 20, Jerry received a phone call from a number that caller ID identified as coming from the Los Angeles County Registrar’s office. A woman on the line said, “I’m calling to let you know that you should not show up to work at the polls on February 22. You are not working 11 days. You are only working four days. We will contact you soon with more information.”

Living on a fixed income, Jerry had been looking forward to the small windfall 11 straight full days of employment would bring. She asked the caller to explain the last-minute change in plans. “Well, we’re getting so many mail-in ballots that we’ve had to change things,” the caller replied. “A lot of people I’m calling are upset about this, some yelling at me.” 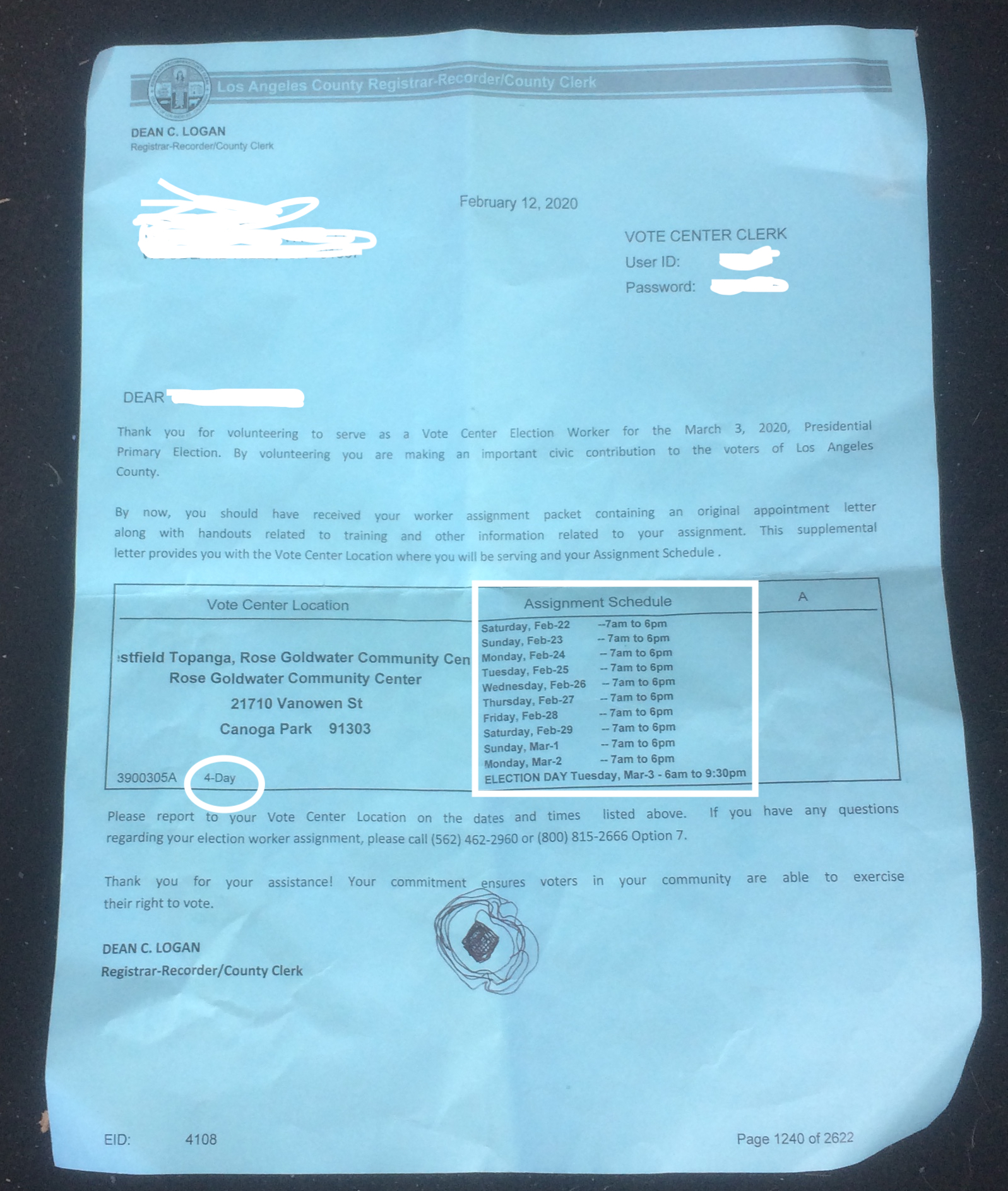 But that wasn’t the end of it. A day after she received the call—and just one day before voting was scheduled to begin—Jerry received a letter from the Registrar-Recorder Dean C. Logan’s office directing her to show up for a full 11-day period of work at a Canoga Park Vote Center. Confused by the conflicting information, she telephoned the L.A. registrar at a phone number listed on the letter. The man who answered said he didn’t understand why Jerry had received a phone call cutting her work days. That was inaccurate, he said. Deepening her confusion, the letter says “4-Day” beside the 11-day schedule.

“There were a lot of elderly people being trained to work at the polls,” Jerry told me. “They are easily confused, and if they didn’t take the time to do what I did and call the registrar directly, they probably would not show up to work. And the voting system is complicated, using paper and a computer, not an easy thing to learn. I’m very concerned workers will not show up and those who are there will be overwhelmed.”

Mike Sanchez, a spokesperson for the L.A. County Registrar, said on Friday afternoon that this was the first time he was hearing about phone calls giving information that does not jibe with letters. He said he would investigate further to see if any official calls were going out to poll workers that contradicted instructions in the written notices. He said Jerry had the correct information now, however, that she ought to show up to her polling station and expect to work for 11 days. As of Saturday morning he had not provided additional information. It turns out Sanchez was wrong.

When Jerry showed up to the polling place, the Rose Goldwater community center at Westfield Topanga, at 7 a.m, doors were locked. A few other poll workers had shown up and were cooling their heels outside. The polls were scheduled to open at 8 a.m, and the workers would need time to set up. At 7:30 am, Jerry says, one of her coworkers called the registrar’s office to inform them that workers had not gained entry. A county representative said someone would soon be coming to unlock the place. But a few minutes before 8 a.m., the doors remained firmly padlocked, even as a stream of frustrated voters began showing up.

“There’s been a miscommunication all around. In the 12 years I’ve been a poll worker nothing like this has ever happened”

They were joined by Laura Kopase, a veteran poll worker with 12 years of experience overseeing many local and state elections. She had been assigned to be the lead poll worker at at an elementary school in Porter Ranch. “It was also all locked up,” she said by phone. So she decided to drive instead to the Rose Goldwater center, which was listed as an 11-day vote center in a mailing she had received. “There’s been a miscommunication all around,” she explained. “In the 12 years I’ve been a poll worker nothing like this has ever happened.”

At around 9:10 a.m., the lead poll worker at the Rose Goldwater community center Vote Cetner announced to the growing crowd that she had just spoken to the county and was informed that, despite the information in the mailings, this specific location was not going to be open until February 29. (A map on the registrar’s website currently indicates that it’s a February 29 center.)

As the poll workers left and as voters continued to show up, Jerry said there was no one was left behind to inform voters what was happening, nor was any notice being left on the front door.

Just before noon, another Twitter user commented on Registrar-Recorder Logan’s enthusiastic “vote now” tweet, saying, “Insanity! Total chaos at polling centers! This is inexcusable. All systems at all voting centers should have had test runs the day BEFORE polls opened!” Logan has yet to reply.

RELATED: Everything You Need to Know About L.A. County’s Newfangled Voting System