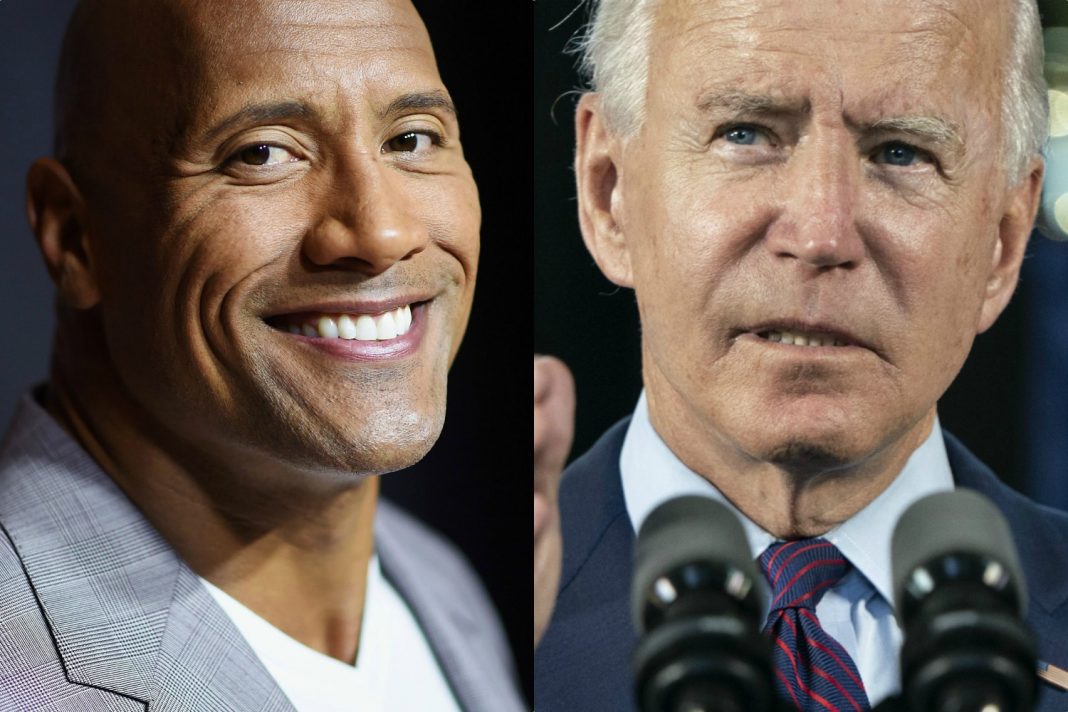 Breaking with his usual apoliticism, Dwayne Johnson took to Instagram Sunday to throw his not-unsubstantial weight behind Joe Biden and Kamala Harris in the 2020 Presidential election.

The WWE champ and reigning highest-paid movie star in the world starts off his announcement by saying, “Now this is something that I’ve certainly not done in the past, so I’m gonna go big… As a registered independent for years now with centrist ideologies, I do feel that Vice President Biden and Senator Harris are the best choice to lead our country, and I am endorsing them to become President and Vice President of our United States.”

The scene then switches to a video conference between Johnson and the candidates.

After Harris thanks Johnson for his work on the Fast & Furious franchise as well as the 2017 Jumanji sequel, he says, “I’ve never publicly endorsed a presidential candidate, or a vice presidential in my life, over my career, so I figured let’s kick the conversation off this way, by me officially, publicly endorsing you both to become President and Vice President of our great country.”

“That means a great deal to us, for real,” Biden replies. “Thank you.”

“You guys are both obviously experience to lead, you’ve done great things,” Johnson continues. “Joe you’ve had such an incredible career. You’ve led, in my opinion, with great compassion, heart, and drive. But also soul.”

Johnson then lists Harris’s achievements, saying she’s “smart, tough—I’ve seen you in those hearings,” and adds, in what will certainly become a Hall of Fame T-shirt, “In my opinion, you’re a certified badass.”

While Johnson doesn’t specifically mention Trump in the video, he still manages to slam him with the People’s Elbow, going after such tender weak spots as respect, decency, and honesty.

“Joe,” he says, “you and I have talked about the relationship you had with your father. You know, this idea of respect, and earning respect that our parents have taught us. My Dad always said, ‘Respect is given when it’s earned.’”

When Johnson asks Biden and Harris how they’ll earn the nation’s respect “once you’re in that White House,” Biden replies, “We’re not going to be perfect, but take responsibility. Say, ‘This is what I’m going to do, this is what I believe, and tell the truth. That sounds so basic, but the American people are strong, they’re tough. They can take anything if you level with them and tell the truth.”

“It’s about trust,” Harris adds. “And as we know the nature of trust is that, as Joe was saying and as you’ve said, it’s reciprocal relationship. You give and you receive trust, and one of the foundations of trust is truth. You cannot have trust if you don’t speak truth.”

For his finishing move, Johnson wraps up his endorsement by telling Biden and Harris, “You mentioned the word ‘decency,” you mentioned the word ‘respect’ and ‘honesty,’ dealing with this, but it’s also, it leads right into making progress but through a humanity, and how important that progress is, but through humanity, and thank you for saying that.”

Take your thank you and stick it right up your fat bloated fascist ass! https://t.co/63H0zctIJt

RELATED: Why Kamala Harris May Be the Perfect Weapon Against Trump

NorCal Mom Scammed Over Formula for Her Daughter with Rare Disease