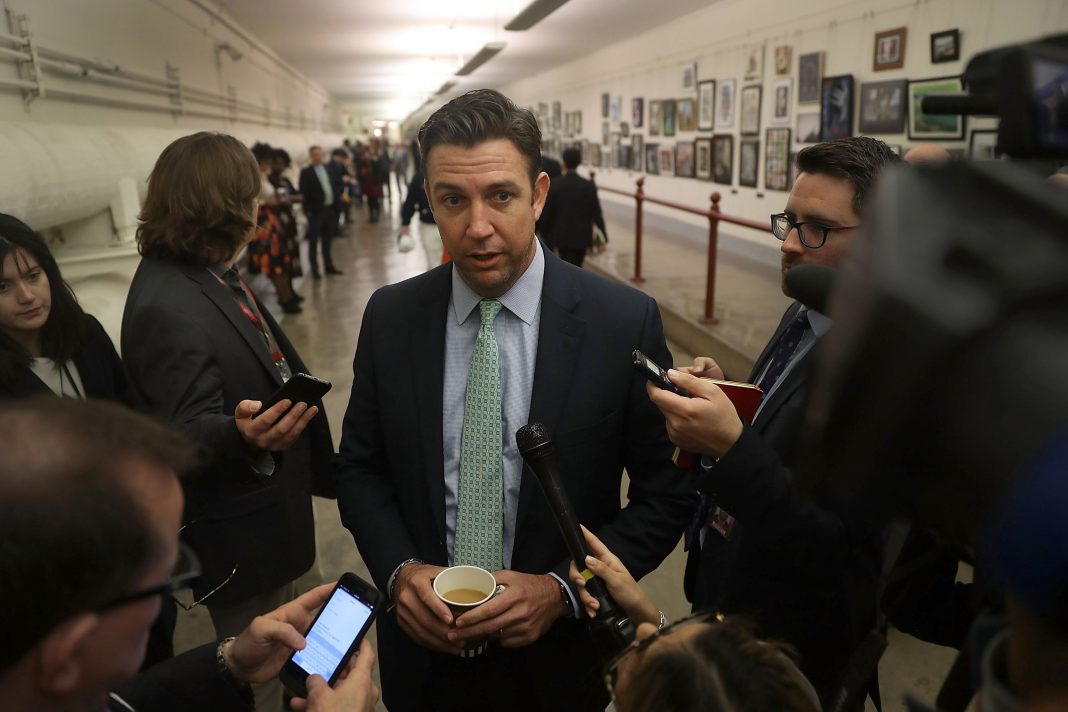 Update (12/3/19): At his hearing this morning, Duncan Hunter entered a plea of guilty to one count of conspiracy to misuse campaign funds. He now awaits sentencing on March 17; the Los Angeles Times reports he is facing prison time. While he has yet to make a formal announcement about the status of his congressional seat, it’s now widely suspected that he will resign in the near future.

Scandal-dogged San Diego congressman Duncan Hunter will plead guilty to charges of campaign finance violations, The Hill has confirmed. Up until now, the Republican congressman had insisted he was innocent; Hunter’s wife and former campaign treasurer Margaret Hunter, who was also indicted, reversed her “not guilty plea” in June and is believed to have been cooperating with the prosecution.

“It’s important not to have a public trial for three reasons, and those three reasons are my kids,” Congressman Hunter told talk radio station KUSI.

The Hunters were indicted in 2018, on 60 criminal charges related to the misdirection of at least $250,000 of campaign funds for personal spending. The money was said to have been spent on everything from expensive bar tabs and vacations to dental work and private school tuition for their children. Duncan Hunter, a former Marine, was also accused of buying golf gear for himself and then falsely claiming it was intended as a contribution to “wounded warriors,” as Military.com reported. Records filed with the Federal Election Commission are alleged to have been knowingly falsified, attempting to cover the spending as “campaign travel,” “dinner with volunteers,” and other legitimate expenses.

At one point, Hunter alleged that his own son was to blame for using campaign funds to pay for video games, claiming the child grabbed the wrong credit card because both cards were blue.

Last June, just days after Margaret Hunter changed her plea in the case, prosecutors revealed additional allegations against Congressman Hunter, suggesting he also used campaign funds to pay for vacations, hotel stays, and meals with five different women with whom he carried on extramarital affairs. All five of the women were congressional staffers or lobbyists, so Hunter initially argued the meetings were professional in nature, but that did not appear to hold up. Federal prosecutors claimed to have “evidence of the intimate, entirely personal quality of Hunter’s specific encounters with these women,” which could be presented at trial to establish that the spending was illegal.

On Monday morning, the San Diego Union-Tribune broke the news that Hunter would be retracting his “not guilty” plea, discovered when the U.S. District Court’s docket website announced the change of plea hearing. Hunter has not yet confirmed which specific charges of those brought against him he will be pleading guilty to, but that paper reports it is expected to be one count of illegal use of campaign funds.

A guilty plea in this case would also end an unusual legal move made by Hunter’s legal team, in which he appeared his prosecution before the trial began. They had argued that campaign spending was “protected as legislative activity not subject to prosecution by the executive branch,” according to the Union-Tribune.

After his indictment, Hunter was allowed to remain in the House, but was removed from all committee assignments. Now many are wondering if he can continue to hang on to his seat at all.

If he resigns immediately upon entering a guilty plea, the process may look similar to what is happening not far north of his district with Katie Hill’s former seat. Even if he tries to stick it out, he may quickly find himself a lame duck. Multiple Republicans had already announced their intent to challenge him in the party’s March 3 primary, including former Congressman Darrell Issa. In the general election, Democrat Ammar Campa-Najjar has stated his intent to run again; in 2018, Hunter defeated Campa-Najjar by a margin of less than 9,000 votes.