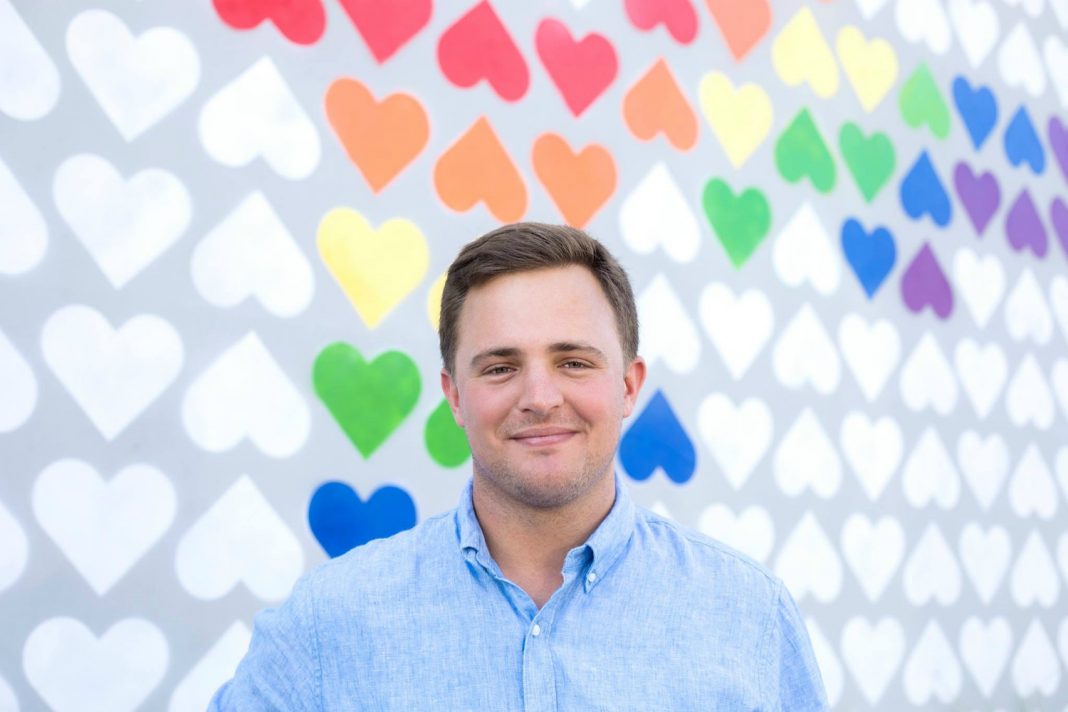 Finding a descendent of Hollywood royalty who doesn’t fall back on showbiz nepotism is like finding an L.A. Starbucks that isn’t packed with screenwriters. Not bloody likely.

But James Duke Mason, better known as Duke, isn’t an aspiring actor, singer, or producer—despite being the only child of the Go-Go’s Belinda Carlisle and agent/producer/exec Morgan Mason—and grandson of late megastar James Mason (Lolita, A Star is Born version 2.0) and media personality Pamela Mason.

Mason got a different, but just as fervent, calling: politics. He’s currently running for one of three available seats on the West Hollywood City Council on March 5, vying against ten other candidates, two of whom are incumbents. But the fresh-faced 26-year-old does have concrete experience at his ripe young age: “I was a page in D.C. on the House floor when I was 16,” he says over a chopped salad and Arnold Palmer in, where else, WeHo. “[I] started writing articles on LGBT concerns for Frontier from age 17; I was appointed to the board of Outfest at 19. I’ve been on the WeHo Lesbian and Gay advisory board for 3 years now. And I worked as an official LGBT surrogate, giving speeches around the country for the Hilary Clinton campaign.” He also does freelance PR for various entertainment, LGBT, and animal rights projects.

Mason wasn’t actually raised in Hollywood. “I was born at Cedars Sinai, but when I was 2 we picked up and moved to France. And to be an openly gay 14-year-old politically motivated American there—my international friends in school definitely did not get me. I wore a rainbow, gave presentations on Harvey Milk. Literally the day I graduated, at 18, I got on a plane, flew to L.A., got to the hotel, changed, and went right out to WeHo—and that was it! I’ve lived here ever since. I don’t think I could live in any other part of Los Angeles.”

But can an advantaged showbiz offspring relate to the normal working citizen? “Granted, I have lived a somewhat privileged life,” he shakes his head. “But my mom lived a really tough life—one of seven kids in the Valley, her father beat her, they had no money. She instilled in me at a young age: ‘You had all the privileges—now go do something valuable.’”

Mason got started early and announced his campaign a year ago—this is his second go at WeHo City Council, but this time out, he’s a lot more prepared: “I have professionals who’ve helped me put together two fundraisers, a campaign consultant who’s helped do direct mail, and now James Costos (former ambassador to Spain) and partner Michael Smith (famed decorator) are throwing me an event And I was just endorsed by the organization Run for Something, one of three groups funded by Hillary Clinton’s organization.”

And even though WeHo City Council’s a non-partisan position, Mason’s platform checks off all the requisite liberal values boxes. “The most important issue is homelessness—a lot of people don’t want to talk about bigger need for affordable housing, but I do,” he says, listing his political priorities. “Animal welfare. Obviously gay rights.”

And while a run for Congress isn’t on the slate for right now, it does bubble up in the back of his mind: “But first, I have to win this seat. I mean, being able to be in government, and grab my coffee at Conservatory and walk down the street to go to work—what a dream, right?”

RELATED: The Story of How West Hollywood Came to Symbolize LGBTQ L.A.