With the summer solstice still a week away, a coming heat wave combined with a crushing drought might feel unbearable at ground level, but maps from U.S. Drought Monitor—the government’s official drought-tracking service—as well as the Department of Agriculture and other agencies reveal a parched landscape the likes of which the American West hasn’t seen in decades.

According to Drought Monitor’s June 8 data, “extreme” and “exceptional”—i.e. the worst—drought conditions are afflicting states from Washington down through Utah, California, and Nevada, and as far south as Texas, with both short- and long-term impacts. 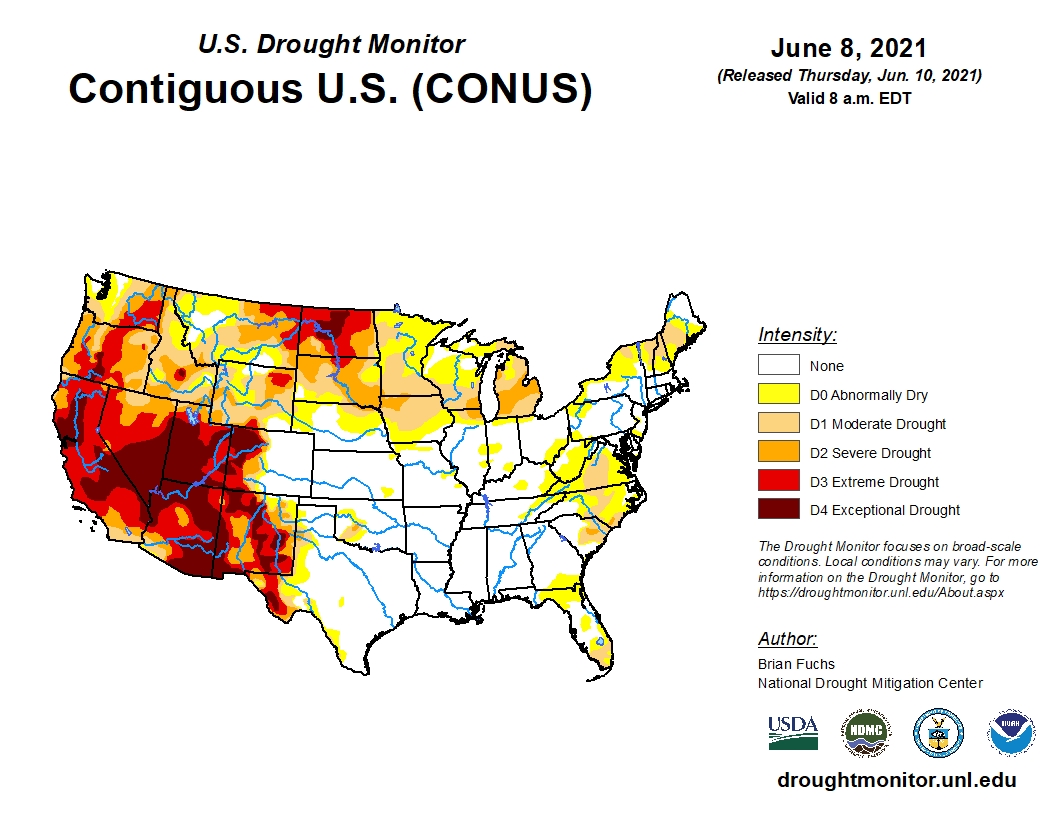 As the New York Times reports, things haven’t been this bad in at least 20 years, and there is no reprieve in sight with the real summer months still ahead.

The news is especially bleak for California, where outdoor watering restrictions are already in place in many Cal Water districts after an unusually dry winter and unseasonably warm spring. (Los Angeles Department of Water and Power always prohibits outdoor watering between 9 a.m. and 4 p.m.)

“There’s a 100 percent chance that it gets worse before it gets better,” UCLA climate scientist Daniel Swain tells the Times. “We have the whole long, dry summer to get through.”

Experts say that the only reprieve before October could be the late summer monsoon that normally supplies about half of the Southwest’s yearly rainfall, but there was barely one last year and the National Interagency Fire Center predicts precipitation will be below normal this summer as well.

While last year’s West Coast fire season was the worst on record, California has already seen twice the acreage burned this year than during the same period in 2020.

“Not everything is predictable,” Swain tells the Times. “But of the predictable elements—how dry is the soil? And will it get better in the next months?—those are as bad as it can be. Most of the West is at increased risk of large, severe fires this year. That may sound like a broken record, but maybe that’s the point.”

Because climate change has and will continue to play a big part in the deep-crisping of the Golden State, Jeanine Jones, the interstate resources manager for the California Department of Water Resources, says the phenomenon must be factored into drought forecasting and planning.

“We’ve now had two dry years,” she told the Times, but “this is all occurring in the context of a longer period, a couple of decades, of generally dry and much warmer conditions.”