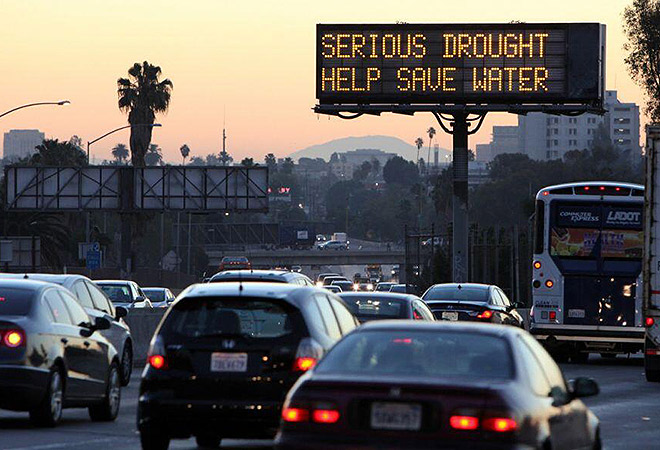 Nearly three months ago, Governor Jerry Brown issued an executive order outlining measures for combating what’s been called the worst drought in recorded California history. “I call on every city, every community, every Californian to conserve water in every way possible,” he wrote in the statement. Three months before that, in January of this year, he declared a drought state of emergency. If he was trying to scare us straight, it hasn’t exactly worked—there has only been a five percent reduction in statewide water usage since May, 15 percent short of the number Brown was hoping for.

That isn’t to say a five percent drop is meaningless, or that certain L.A. institutions haven’t taken Brown’s suggestions to heart. Last month, for example, the Getty Center and the Getty Villa turned off fountains and drained pools that do not currently house fish or plantlife, an act that, according to their blog, saves nearly 2,500 gallons of water per day. Other fountains, however, are still spouting off: approximately 2,250 gallons of water are still running through the William Mulholland Memorial Fountain every minute, which holds 50,000 gallons total. To make matters worse, the fountain uses “re-circulated” water (as opposed to “recycled” or grey water, both of which Brown makes concessions for), meaning once the contents evaporate, more water is pumped in. Seems like a big, wet slap in the face of the city’s dire situation—especially when, according to the Los Feliz Ledger, the LADWP has no current plans to let the thing run dry. Those who play fast and loose with the governor’s orders might be in for a shock, however, should state officials have anything to say about it.

This week, the Water Resources Control Board—composed of five members appointed by the governor—will be reviewing proposed emergency conservation rules that could result in fines of up to $500 per day for excessive lawn-watering or car-washing (among other wasteful things). Public agencies could get hit with a daily fine as well, up to $10,000, if they don’t moderate customers’ outdoor water use.

The Water Resources Control Board wasn’t immediately available for comment regarding the proceedings, but should the conservation rules pass, restrictions and fines will take effect August 1.