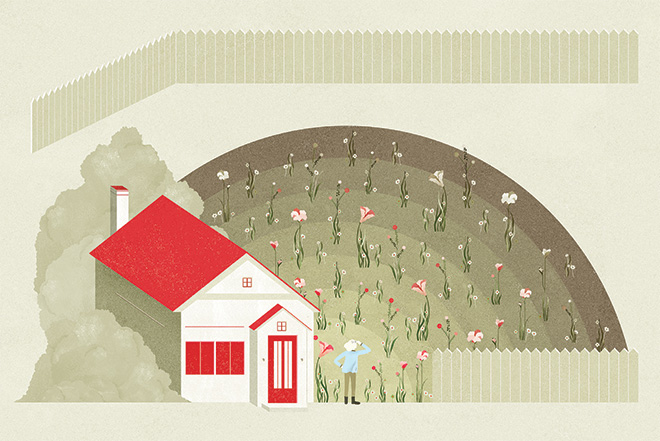 What a beautiful and spooky winter we had. The balmy days just kept coming, one after the other. Up we went into the 70s and 80s. As a sunshine baby, I loved it, padding about my house and yard in shorts and flip-flops. At dusk I walked to the beach and back in a light sweater, admiring the sometimes vibrant sunsets. Late into the night I left the back door and all the windows open, watching the moon rise, the dogs snoozing on the patio as if it were a summer evening.

It was difficult not to be pleasured, especially as we watched the East Coast and even the South get walloped again and again by snow and ice storms, the traffic pileups on the Atlanta highways easily outdoing Jamzilla. Of course the ferocity of their season versus the mildness of ours added to the weirdness, the sense that indeed the climatic trends were dramatic and meant trouble.

A quick scan of our numbers is bracing. The Los Angeles region is the driest it has been in 163 years. In fact, some say it could be the driest in 500 years. Last year we had only 3.6 inches of rain versus the annual Southern California average of 15. In the first two months of this year—usually our wettest period—we got but a spit until that end-of- February downpour. On those lyrical afternoons as I marched to and from the ocean, I finally let the reality sink in, taking dark note of the lush lawns and abundant foliage I passed. All that water, all those sprinklers. I cast an equally sharp eye on my own small front lawn and flowers—not to mention the prolific lemon tree—looking robust and healthy in the waning light of day. Even the thorny blackberry vines my husband had planted along our white picket fence already had a few wildly premature edible samples. Clearly the clock was out of whack. I had that moment of thinking, What an audacious place to put a big city, to let it sprawl across such semiarid land. I also thought, Is it finally time to ditch the grass and go to a hardscape? Or at least native plants?

Like many in this metropolis, I have an intimate, perhaps guilty, relationship with water, images of the movie Chinatown playing in my head. I know we get most of it—about 70 percent—from elsewhere, our massive aqueducts like giant straws sucking water from parts north and from the Colorado River. But the Sierra snowpack is minimal—only 12 percent of its average for this time of year—and the Colorado is running dry. This is a creeping disaster. It didn’t jolt us out of the blue as an earthquake would. But this water thing, the dance of denial we do with it, is profound. As I move around the city, people are talking about the issue but not in an urgent way. An older friend says, with bleak mirth, “I’ll be out of here when we really run out.”

To get a sobering sense of the impact, I walk through my local farmers’ markets, amazed, as always, at the cornucopia of radishes and tangerines, delicate greens, and purple-hued baby artichokes. What a transformative gift these places are, bringing the countryside to the city. How impoverished we would be should they suddenly disappear. Not to sound cataclysmic—unusually so for an Angeleno—but there is deep concern humming beneath the festive, aromatic air of these markets. Talk to the produce sellers and you hear firsthand from the emissaries of extreme drought land, where the earth is parched and the wells are operating just a couple of hours a day. “It used to be that we could start pumping, and they would never run out,” farmer Nate Peitso told me. “Now we have to buy a lot of our water, and it is much more expensive. I don’t know what we’re going to do.”

Lanky, with a hippie vibe, Peitso is the owner of the ten-acre Maggie’s Farm (yes, named after the Bob Dylan song) in Agoura Hills. His stall is one of my favorites, with its signature mixtures of colorful lettuces and herbs. “I guess I can always sell dust,” he adds with the shrug and smiling fatalism of those intimate with the vagaries of weather.

Talk to those farther up in the belly of the state, the Central Valley, and you hear some of that same pluckiness. You also hear more fear. On his 30 acres in Dinuba, 26 miles southeast of Fresno, Troy Regier cultivates more than 50 varieties of stone fruit, picture-perfect nectarines and peaches among them, that are coveted by some of L.A.’s top chefs. “It’s hard,” he says of the ongoing low rainfall, “like gambling in Vegas. I don’t know what we’re going to do when summer comes and it hits 100 to 110 degrees.”

I look at these men, with their handsome, tanned faces, and think of all the other growers out there, including those with substantial acreage and similar trepidations (there are roughly 81,500 farms in the state, making us number one in the nation in agriculture). Wandering among the produce stalls, I take in the congenial atmosphere as shoppers in short sleeves buy strawberries and cilantro and shiny bell peppers. I wonder to myself whether people are aware of what a miracle this bounty is, especially given the tough state of the soil in which it is planted and harvested. We are ridiculously lucky—and oblivious. At the Underwood Family Farms tables, artfully laden with brussels sprouts and carrots and voluptuous heads of romaine, Cathy Dominguez speaks for her hardworking colleagues: “People stroll up in shorts and they say, ‘What a beautiful day.’ And I say, ‘Please go home and do a rain dance.’ ”

I ask her what else she would share with her patrons: “I would tell them just to be conscious, and when their water bill goes up, to follow the path backwards and really understand what’s going on. If you can care, please do.”

In fairness to the city, we’ve done a pretty good job of getting our act together since the last devastatingly dry period, which lasted from 1987 to 1992. I remember well those panicky days of mandatory conservation, when you weren’t allowed to wash your car and sprinklers could be turned on only before sunrise and after sunset. We were all enlistees in the conservation battle, and a new consciousness took hold. Like many others, I have a low-flow toilet and showerhead and a high-efficiency washing machine, for which I received a nice rebate. The result is—and I have to admit I was quite surprised—L.A. is at the top of the list for water conservation among major U.S. cities. Our per capita consumption is 123 gallons a day, compared with the 200 used by Chicago, and we are far ahead of the northern part of the state in taking care of the water we have.

So we should feel good, I suppose. Southern California has also increased its storage capacity fourteenfold since 1990. That means we have enough water to get through two more years, which is why no one is talking about rationing yet. The governor has asked for a voluntary 20 percent reduction in usage. He and his wife are down to 35 gallons a day. Looking around the farmers’ markets, feeling the tremors, and watching the sprinklers in action around my neighborhood, I think that we’re playing a crazy—if political—waiting game. Why not make reduced consumption compulsory? Apparently the old restrictions are still on the books in L.A., something else I didn’t realize. Let’s bring them out, dust them off, and talk them up: a New Crusade.

Obviously no city has the wherewithal to muster a water-police force, so even mandated reductions are going to be left up to the citizens. But I think people like to be called on when the stakes are high. At least that disconcertingly bright and warm winter got everyone talking again. So now is the time. As for tearing out the lawn and going native, I’m content for the moment to use my sprinklers far less often and am waiting for the brown patches to appear. Which shouldn’t take long.

SoCal Gets Emergency Order to Limit Water Use During ‘Megadrought’

Californians Ignore Newsom’s Plea to Cut Water Use Amid Drought