Home Uncategorized Drones in the Hood 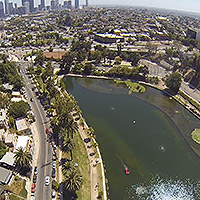 Snagging a bird’s eye view of L.A.’s coast—or lakes, beaches, forests, canyons, etc.—was once a luxury reserved for helicopter pilots, skydivers, or, well, birds. But technology (and the times) are a-changin’. Thanks to the invention and mass availability of remote controlled drones, miniature aircrafts affixed with cameras, there’s no need to spring for a one-time ride in a chopper (unless, of course, you’re striving to achieve ultimate Angeleno status). Residents all over town can spend as little as $107 on the small camera-copters to take video footage from hundreds of feet above L.A. Just yesterday, Eastsider LA shared the video above taken by Daniel Lingua, who used his drone to capture stunning panoramic views of Echo Park Lake. Seems harmless enough. But a recent story in the Los Angeles Times is raising red flags when it comes to privacy.

Torrance resident Daniel Saulmon uses a drone to patrol police DUI checkpoints and traffic stops in the South Bay. Neither Saulmon nor his lawyer are concerned with legal repercussions of such videos. “My attorney told me there isn’t really much regulation on them,” he says.  While Saulmon may be using his drone powers for what he perceives as good, others may not be so golden hearted: last year at Hermosa Beach, a woman confronted a lifeguard regarding a drone that snapped pictures of her and her daughter while the two were tanning on the beach. Yikes.

The LAPD is aware of the growing popularity of drones, but they aren’t especially prepared to impose blanket rules for the devices. “I have to weigh it on a case by case basis,” said Lt. Phil Smith, assistant commanding officer for the LAPD’s air support division. Moral of the story? Fly drones responsibly. The vlogosphere will thank you.