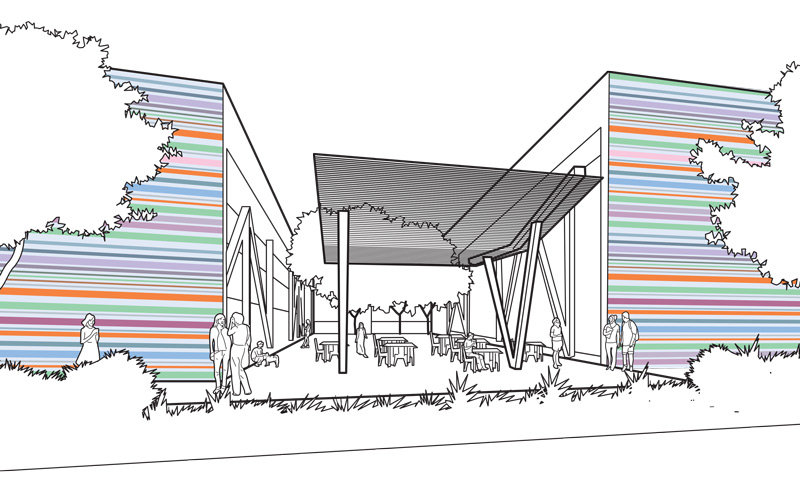 As sight lines go, the long, narrow Pen Factory in Santa Monica is low profile. But not its recent history. A Paper Mate plant from 1957 to 2005, it sits across Olympic from an Expo Line stop and was to be razed to make room for the Bergamot Transit Village, with office and retail space plus nearly 500 housing units. Fierce community resistance quashed the plan. New owners, who opted to avoid identifying themselves, skirted controversy by repurposing the bland concrete structure as creative office space.

Injecting it with inspiration fell to the architectural firm Skidmore, Owings & Merrill, aka SOM. “The big idea was to create as much outdoor space as possible,” says lead project designer Carlos Madrid III, “which was the impetus for taking out the center portion of the building.” That’s where a courtyard went. There’s also an 880-foot-long “linear garden,” a dog park, space-saving mechanically stacked subterranean parking, and room for 270 bikes (showers, too).

Exterior murals composed of colorful lines conjure the ghosts of Paper Mate pens past. Madrid is also designing the interior for the first tenant, AwesomenessTV, a content provider for teen and tween girls that moves in this fall. His mission: to make it “as loud and as active as possible.” Not unlike the people who resisted the transit village.

“SOM’s a great group, and I’m sure what they produce there will be a nice project for those office tenants,” says Santa Monica city councilman Terry O’Day. “The project we had slated to go in instead of that one, however, had a lot of advantages that this one doesn’t. Most important, it had housing. We’re in the midst of a housing shortage.”