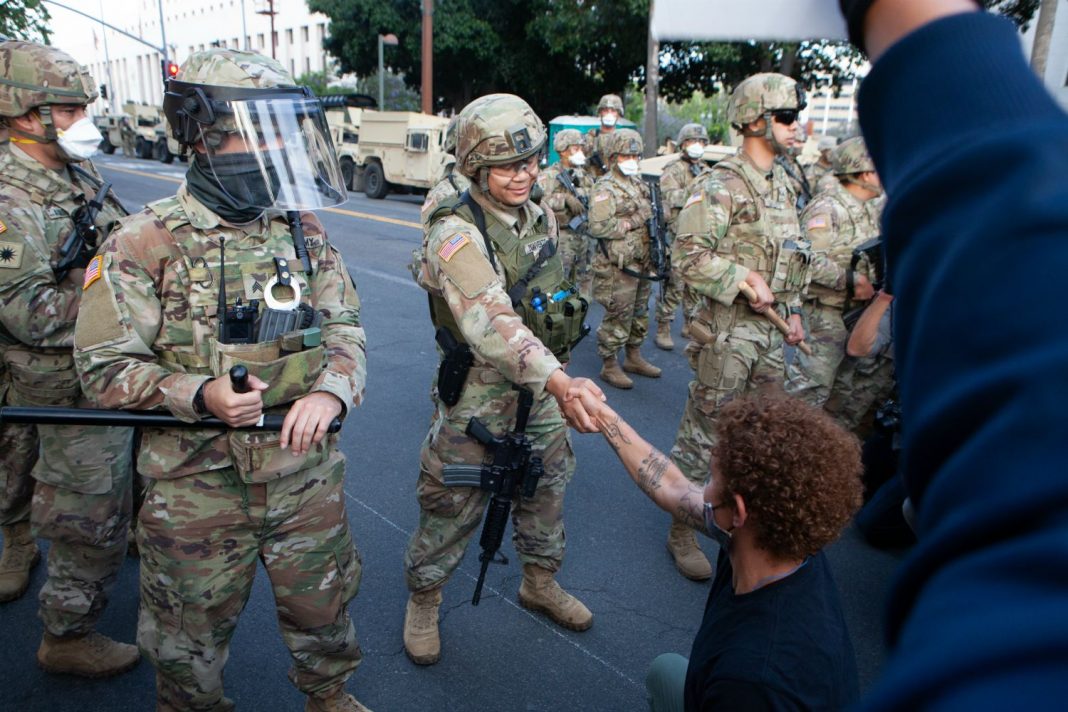 Downtown Los Angeles saw another day of protests on Sunday following the arrival of the National Guard. Hundreds of people gathered in front of City Hall in a largely peaceful demonstration to air grievances over police violence in the wake of the death of George Floyd and to call for greater accountability for police conduct. As the hours ticked past a 6 p.m. curfew, demonstrators marched away from City Hall and through downtown, taking police on an hourlong chase through the Jewelry District and the Historic Core, down to Skid Row. Police made multiple arrests by the end of the night.

“Sunday was one of the most distressing days in Santa Monica history,” Santa Monica Mayor Kevin McKeown said in a statement.

Protesters at City Hall seemed aware of the state of things, self-policing to ensure that the situation didn’t get out of hand.

“We’ve gotta remain peaceful, we cannot give them a reason to escalate violence,” one protester who appeared in charge yelled out, warning that the National Guard were armed with live ammunition.

“They kill us and they deport us! Fuck you!” a Latinx protester who identified himself as Alex yelled at the police on the other side of a cordon. As Alex began to push on the cordon, other protesters pulled him back.

“Don’t get them a reason,” a young woman called out.

“All my family’s gone!” Alex wailed before breaking down in tears. Protesters surrounded him and consoled him, holding him and expressing solidarity.

Tension began to build after the 6 p.m. curfew. Over half of the crowd left, leaving just a few hundred who continued protesting. Without megaphones or a clear leader, the attention of the crowd turned entirely on the police and guardsmen. A police captain issued an order to turn on body cameras, but both the officers and guardsmen remained in place with stoic demeanors. Protesters pleaded with law enforcement to take a knee in solidarity with them, a gesture popularized by football player Colin Kaepernick, but none did.

Within an hour, the crowd left the steps of City Hall and took to the streets of downtown. As protesters stalled traffic, cars honked horns and neighbors yelled out of windows in support. Store owners and security guards watched nervously as the throng passed shops and apartment complexes. A small number of protesters spray painted various phrases on buildings and surfaces like “Fuck 12,” “ACAB,” and “Killer Cops!”

The marchers zig-zagged their way onto Broadway and then onto Main Street, where police set up a scrimmage line. A stick of fireworks flew toward the police along with a few bottles. Police answered with a few rounds of rubber bullets, sending protesters fleeing onto Los Angeles Street. This scene played out many more times as police blockades pushed protesters down into Skid Row, past shelters, tents, and their nonplussed occupants.

Soon, the unit of marchers fragmented as police followed more quickly on their trail. Sheltering with friends in an alley, a young woman with blond highlights tried to figure out what to do next.

“You can keep on protesting, but…,” her friend answered before trailing off.

RELATED: Mayor Garcetti’s Budget, Which Includes a Bump in LAPD Funding, Will Advance Unless the City Council Acts