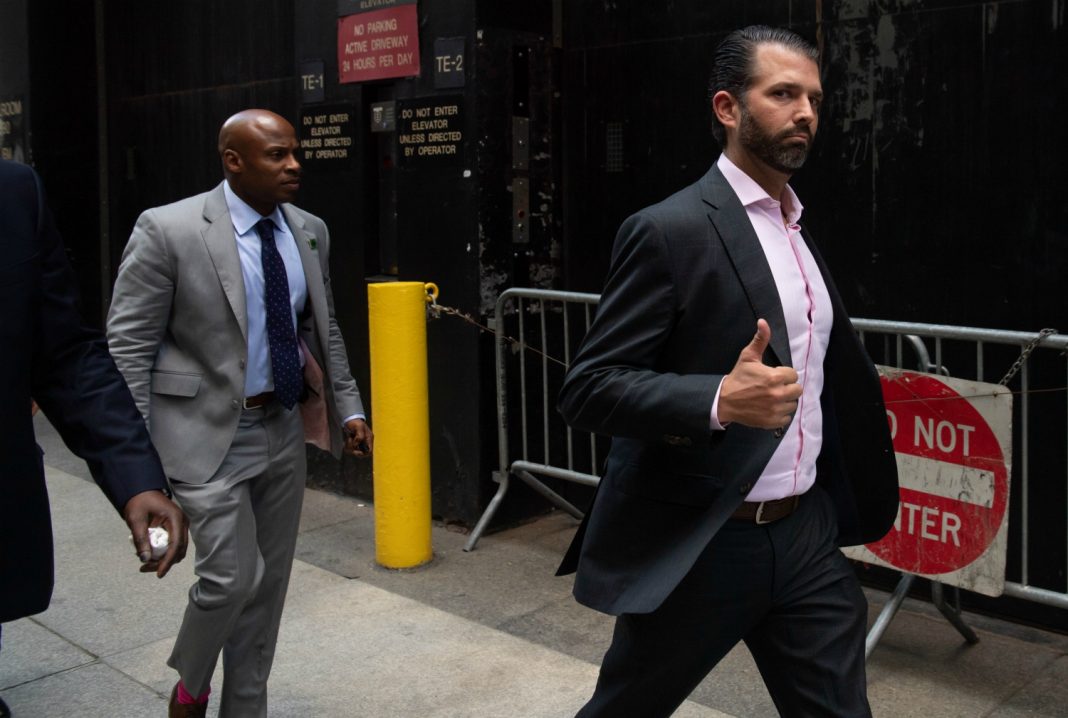 Donald Trump Jr. came to UCLA on Sunday to complain about how Liberal crybabies want to silence him and his ilk, and, in a truly *chef’s kiss* turn of events, was heckled off stage by right-wing Trump supporters.

At a promotional event for his new book, Triggered: How the Left Thrives on Hate and Wants to Silence Us, Junior and paramour Kimberly Guilfoyle apparently vexed the crowd by canceling a planned Q&A session. Amid shouts from the crowd, Trump Jr. croaked, “It’s OK, listen, hey guys—it’s still America. It’s OK. We’re willing to hear them, they’re usually not willing to hear us,” still unaware that the jeers were coming from the “us” in question. Guilfoyle lost her cool and scolded the crowd for being “rude” and “disruptive” and for “not making their parents proud.” She also accused them of romantic ineptitude for some reason, saying, “I bet you engage and go on online dating because you’re impressing no one here to get a date in person.”

According to The Washington Post, the melee resulted from a “rift” between Turning Point USA, the right-wing organization that hosted the event, and an even more conservative faction of Trump supporters led by “American Nationalist,” Charlottesville marcher, and YouTuber Nicholas Fuentes.

“Our problem is not with [Trump Jr.] who is a patriot — We are supporters of his father!” Fuentes tweeted. “Our problem is with Charlie Kirk’s TPUSA organization that SHUTS DOWN and SMEARS socially conservative Christians and supporters of President Trump’s agenda. We are AMERICA FIRST!” In a second tweet, Fuentes accused TPUSA founder Kirk of “trying to silence and smear a burgeoning America First youth movement on campus.”

The media is getting this Don Jr story all wrong— the UCLA event was heckled because Charlie Kirk has been trying to silence and smear a burgeoning America First youth movement on campus. This only boiled over after he cancelled the Q&A yesterday in anticipation of our questions!

A pair of attendees identified as Joe and Orion Miles spoke to the Guardian after the event about their successful effort to disrupt the event. “It was an absolute disaster for them,” they said. “We wanted to ask questions about immigration and about Christianity, but they didn’t want to face those questions.”

Trump Jr. hasn’t reacted to the UCLA incident on Twitter, but apparently his appearance at the Reagan Library yesterday evening was more successful.

Thank you Reagan Library for an amazing evening! 4 hours and 1400+ people later, we just wrapped! Unlike some, this show stays HIGH ENERGY! #Triggered pic.twitter.com/9zp6Cp3fgU