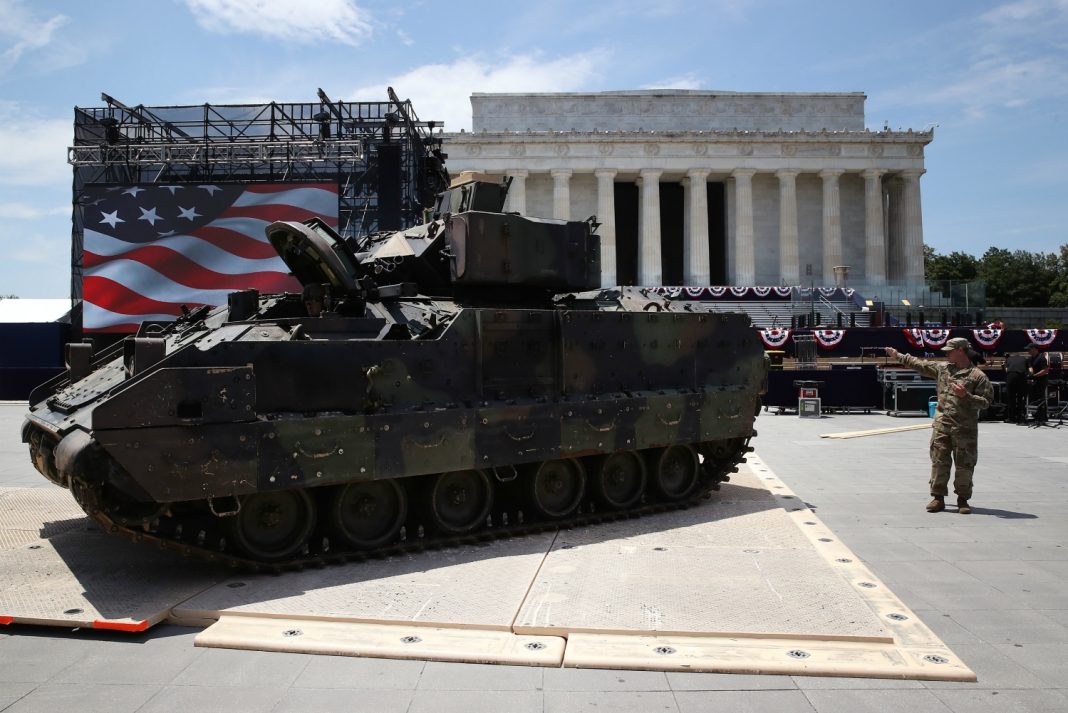 With Donald Trump forcing the National Park Service to divert $2.5 million from its infrastructure budget to host his Stalinesque Independence Day military spectacle while immigrants are being held in cages on the border, Americans are swarming Twitter to express their displeasure.

The hashtag #BoycottTrump4thOfJuly is trending with more than 100,000 tweets so far. One poster notes, “When I think of a tank parade, only one image comes to mind,” along with an image of the so-called Tank Man of Tiananmen Square staring down a column of tanks in Beijing in 1989.

when I think of a tank parade, only one image comes to mind #BoycottTrump4thOfJuly pic.twitter.com/wrSWm5EfwV

Anti-Trump pundit and Democratic fundraiser Scott Dwarkin says, “Military chiefs have concerns about Trump’s politicization of his 4th of July event in DC. In response some military chiefs won’t be attending and will send alternates instead. They also don’t think tanks and armored vehicles should be on display.”

BREAKING: Military chiefs have concerns about Trump’s politicization of his 4th of July event in DC. In response some military chiefs won’t be attending and will send alternates instead. They also don’t think tanks and armored vehicles should be on display. #BoycottTrump4thOfJuly

Meanwhile, MSNBC is declining to give the event the attention Trump craves.

And the network’s Andrea Mitchell is totally on board with the decision:

You know what would be a real #SaluteToAmerica? The Trump administration putting their resources into solving the humanitarian crisis at the border– not politicizing the #4thofJuly to inflate the President's ego. #ForThePeoplehttps://t.co/nEFfOPP7sj

In another thread, CNN law enforcement analyst and former FBI agent, Josh Cambell, former Obama administration director of the Office of Government , Walter Shaub, and former U.S. Attorney Preet Bharara, all agree that the whole thing seems like a fundraising scam by Trump and is, therefore, ethically dubious (shocker).

Still, some people, longing for good ol’ days, will not let this parade go until you pry it from their cold, dead hands. Like once-beloved Love Connection host Chuck Woolery, who’s become a right-wing rabble-rouser in recent years, and thinks war machines are an essential part of any holiday celebration.

Tanks, Planes, and missiles have all been on the streets of Washington for inauguration day, Army day, and other events by both Democrats and Republicans since the 1930's. These people in the Media don't know what they're talking about. 4TH OF JULY and Trump.

Woolery may be less thrilled about another addition to the festivities. The activist group Code Pink announced that the Dumping Trump Robot, a 16-foot-tall likeness of Trump tweeting from a golden toilet bowl, will also be on hand. Or on the pot, as it were.