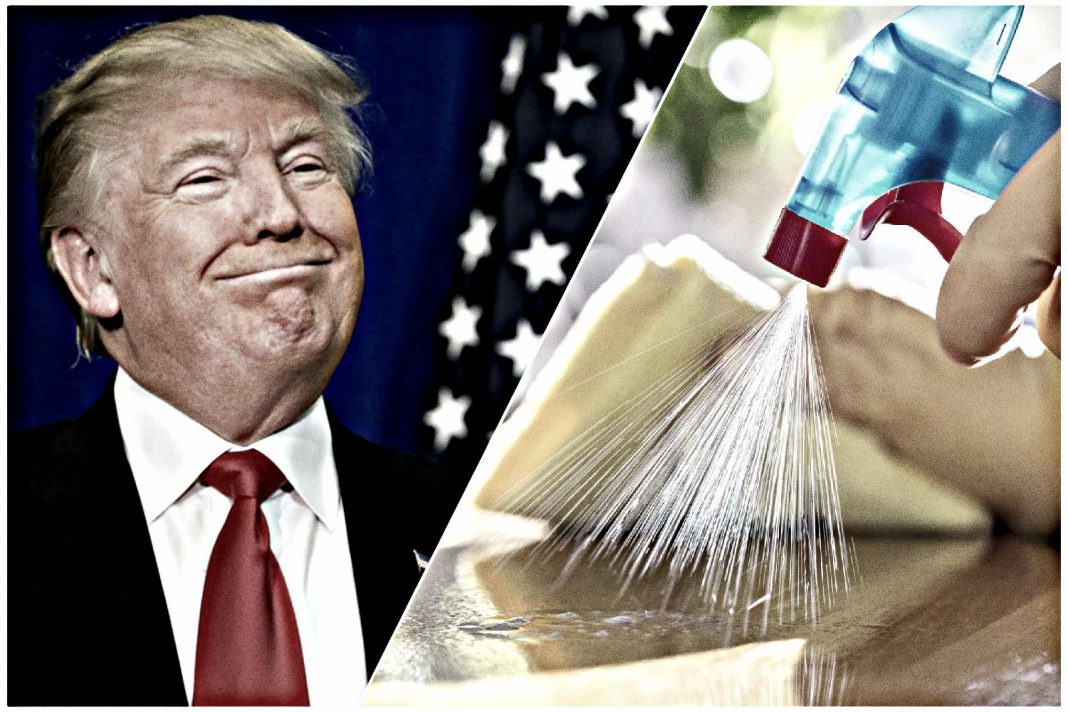 At a Thursday press conference, Donald Trump made comments that many have interpreted to imply he thinks injecting or ingesting disinfectant chemicals might be a treatment for COVID-19.

“I see the disinfectant, where it knocks it right out, in a minute–one minute–and is there a way we can do something like that by injection or inside or almost a cleaning?” the president mused. “It sounds interesting to me.”

Pretty interesting suggestion from the president of the United States here. pic.twitter.com/o2UmDRVpW5

Does Lysol kill coronavirus microbes on surfaces when used correctly? Sure. But the company really hopes you don’t get the idea to drink the stuff.

“As a global leader in health and hygiene products, we must be clear that under no circumstance should our disinfectant products be administered into the human body (through injection, ingestion or any other route),” reads a statement released by Lysol’s parent company Reckitt Benckiser on Friday, which they felt compelled to put out in response to “recent speculation and social media activity.”

The company is worried about people jumping on the idea because ingesting household cleaning products is generally considered pretty unhealthy.

“This is why we have poison control centers,” Dr. David Eisenman, a professor at UCLA’s Fielding School of Public Health says. “I can’t believe we’re even talking about this, but this president never stops astounding us. There is no scientific basis for injecting disinfectants into your body. It’s a poison and it’s incredibly dangerous.”

As for another treatment idea floated by the president at his briefing, exposure to “a tremendous” amount of “ultraviolet or just very powerful light,” Eisenman notes that there is no evidence that UV light on the outside of the body can do anything to treat a virus once you carry it.

“UV light is bad for viruses. That’s a basic truth. It is bad for DNA and RNA of viruses–when it’s on surfaces,” he says. “But UV light to your skin is not going to do anything to a virus inside your internal organs. Along the way, any dose that could even imaginatively get in is going to cause tremendous skin damage.”

So putting your body in a tanning bed because UV lights can “sanitize” your iPhone may not be much more effective than swallowing bleach just because it can clean your countertop (albeit, less deadly).

“What I am really concerned about is that there are people who, unfortunately, will say ‘Hey, that sounds like an interesting idea!’ and they will find something on the internet that supports it. They will try it, and they will get harmed,”  Eisenman says. “That’s the danger. It sparks people searching for it, and invariably finding something that supports the president’s statement, and they’ll go ahead and try it.”

On Friday afternoon, the president appeared to attempt to walk back the remarks, suggesting they were intended to be understood as “sarcastic.”

RELATED: In a Coronavirus World, The Love Boat Is Still Afloat