Home L.A. History A History of the Dodgers in the World Series from 1916 to...

The Dodgers, in one incarnation or another, were winning championships before the World Series was even invented. While the Dodgers rank sixth in all of baseball for most World Series wins in history, the Boys in Blue hadn’t actually brought a Commissioner’s Trophy home to Los Angeles since 1988. As the city celebrates the hard-fought (and COVID-complicated) victory, we take a look back. 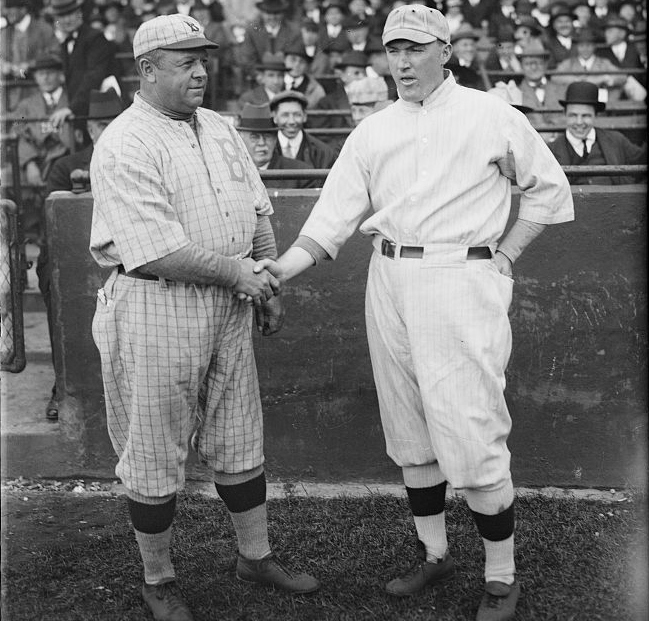 Managers for the Red Sox and Robins meet at 1916 World SeriesBefore the Dodgers became the Dodgers, the team was known for a time as the Robins (they were also the Superbas, Trolley Dodgers, Bridegrooms, Grooms, Grays, and Atlantics at various points, though technically the name during this period was only ever Brooklyn Base Ball Club). In 1916, the team made its first play for the World Series. It didn’t go great for them. In game two, it started strong. Hy Myers hit a home run at the top of the first, but it would be the only time they scored in the whole game. Babe Ruth pitched 13 of 14 shutout innings for the Sox, who would win that game and three others to take the World Series, four games to one.

Players were leveling up their game by 1920. This series included the first triple play, grand slam, and home run hit by a pitcher in World Series history. It was played as a best-of-nine series, as were the 1903, 1919, and 1921 championships. The Robins lost the series, but each player on the losing team still took home a check for $2,419.60 according to Baseball Almanac–that would be worth roughly $34,123 today.

In 1941, the Dodgers were still based in Brooklyn, which made their first World Series matchup with the Yankees the team’s first “subway series.” (However, in 1889, 14 years before NYC’s subway opened, the Brooklyn Bridegrooms had met up with the New York Giants in an American Association “trolley series.”) The Yankees had failed to make it to the World Series in 1940, but otherwise had been on a long winning streak. That resumed with the Yankees taking the championship in 1941–and the win cemented a rivalry between the Dodgers and Yankees that has continued for decades.

One of the most important years in Dodger history, 1947 was the season when Jackie Robinson first hit the major league field. And while he might have been the most historic of players at the ’47 World Series, it was an era of legends. The Dodgers faced a team of Yankees that included Joe DiMaggio and Yogi Berra. The teams went back and forth for six games, going to a tie-breaking seventh, but in that final game, the Yankees pulled out a decisive five-to-two win.

You may be noticing a pattern. Another year, another Dodgers-Yankees World Series–and, sadly for Dodgers fans, yet another loss for the team. The Yankees made fairly quick business of their opponents this time around, though the Dodgers did have one thing the Yankees did not: During game five, the Dodgers’ stadium, Ebbets Field, turned on electric lights, marking the first time any World Series game would be illuminated that way.

The Dodgers kept doing their best, and the Yankees just kept coming out on top. But, on the other hand, if you had caught the broadcast, you would have heard the voice of a new, young announcer named Vin Scully, so how mad could a Dodgers fan really be?

Even if you have no knowledge of Dodgers history, you can probably guess what happened in 1953. The Dodgers played an incredible season, racking up the best winning percentage in the franchise’s history–a record that still stands today. But then they got to the World Series and the Yankees were there, and the Yankees won handily, yet again.

It was a rematch of 1955, but with a different outcome. The New York Yankees regained their wining position. The 1956 series would be the last time two New York teams met in the finals until 2000. After the 1957 season, the Dodgers would move to Los Angeles, and the third New York team, the Giants, would relocate to San Francisco; the Mets wouldn’t exist until 1962.

The Dodgers were finally in L.A., the Yankees weren’t in the World Series at all. You might say 1959 was a…whole new ballgame. Both teams put on strong showings, but the Dodgers ultimately won, bringing a World Series victory to the West Coast for the first time in baseball history.

Facing off against rivals the Yankees yet again, the Dodgers went in strong. Lead by MVP Sandy Koufax, the Dodgers trounced the Yankees in a rare four-game shutout. The final two games were the first two World Series contests to be played in the brand new Dodger Stadium.

The first game of the 1965 World Series was scheduled for Yom Kippur, so star player Sandy Koufax had to sit it out. In the rest of the series, he managed to pitch his way through intense pain from arthritis in his left elbow, which would become aggressive enough to force him to retire the next year. The Dodgers would ultimately push out a 2-0 win in the seventh game to take the World Series for the third time since moving to L.A.

The Dodgers’ ’60s momentum promptly ran out of gas in the 1966 World Series. The Orioles, a newly ascendent team, handily beat the Dodgers in four games. The Dodgers scored only two runs total in all four games–and would not see themselves back to the World Series stage for nearly a decade.

A lot of things happened in the world while the Dodgers took their time rebuilding between 1966 and 1974, among them the move of a team known as the Kansas City Athletics to Oakland. The team moved in 1968, and then won the World Series in 1972 and 1973. By beating the Dodgers in the all-California series of ’74, the A’s continued the three-year streak.

In 1977, the Dodgers met yet again with their old nemeses, the Yankees. This time, they didn’t fare as well as they had in 1963. The Yankees took home their 21st World Series victory and the Dodgers, newly under the management of Tommy Lasorda, went home empty handed.

The Dodgers made it to the championship in back-to-back years–just to lose to the Yankees in back-to-back defeats. It was probably never going to be their year. The Dodgers had barely scraped it together to win the pennant at all and then, just two days before the World Series began, their coach, Jim Gilliam, died of a brain hemorrhage.

The Major League Baseball Players Association went on strike in the middle of the regular season of 1981. When players went back to work after two months the league organized a split-season format, with a complicated multi-part playoff. The Dodgers advanced through the system to face the Yankees once again, but maybe the mid-season break did them some good, as they finally won a World Series against the Yankees for the first time in almost 20 years.

Going into the ’88 series, the smart money was on the Oakland Athletics. The team had performed well through the season and the Dodgers looked like major underdogs. The series was a dramatic one, but in the end, the Dodgers were able to come from behind and make an improbable win.

It was a long wilderness period for the Dodgers, who went from 1988 to 2017 without so much as making it to the championship. Which is why, when #ThisTeam finally made it, Angelenos went berserk. They didn’t pull off the big win, and the Astros were subsequently found to be cheating by using electronic devices to steal signs. “Everybody warned us. A lot of people told us to worry about them,” utilityman Kiké Hernández said during an interview in early 2020. “We just thought it was just rumors, but I guess not.”

In 2018, after a heartbreaker of a 2017 World Series, the Dodgers 30-year championship drought continued. The series ended after the Sox’s decisive 5-1 win in Game 5. Clayton Kershaw took heat for allowing three Boston homers, and people questioned whether he’d opt out of the last two years of his contract (he didn’t). “Ran up against a very good ballclub,” coach Dave Roberts said. “And just a little bit too much for us.”

For the first time since 1988, the Dodgers took home the Commissioner’s Trophy in the 2020 World Series against the Tampa Bay Rays. The season, which was shortened by the  pandemic, sadly wrapped up with a positive COVID-19 test result for Justin Turner, who was pulled in the eighth inning of game six. Perhaps the most consequential change in the game came when Tampa Bay manager Kevin Cash pulled pitcher Blake Snell, who dominated the Dodgers in the first six innings. Cash will have to deal with questions about that decision, which almost immediately resulted in a Mookie Betts home run. We’ll be over here celebrating.

RELATED: Why Does Dodger Justin Turner Smear Dirt Across the Back of His Jersey?