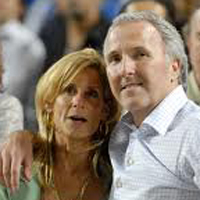 Frank and Jamie McCourt have reached a divorce settlement, reports the L.A. Times.

The agreement, which comes more than a year and a half after the couple split, is contingent upon Major League Baseball’s approval of McCourt’s broadcast agreement with Fox. Should MLB commissioner Bud Selig reject that contract, the McCourts would resume divorce proceedings in court.

The McCourts have also agreed to a one-day trial to determine ownership of the Dodgers, something that was not accomplished with an 11-day trial last year. If Los Angeles Superior Court Judge Scott Gordan finds the Dodgers to be community property, the McCourts will likely sell the team. That is, of course, if Selig does not seize the team beforehand, a possibility that further complicates the McCourts’ proposed settlement.

What does all this mean for the Dodgers? It’s hard to tell with so many contingencies in the equation. At best, an agreement between the McCourts could mean one less distraction for the team and its fans, both of which want the world’s attention back where it should be: on the field.