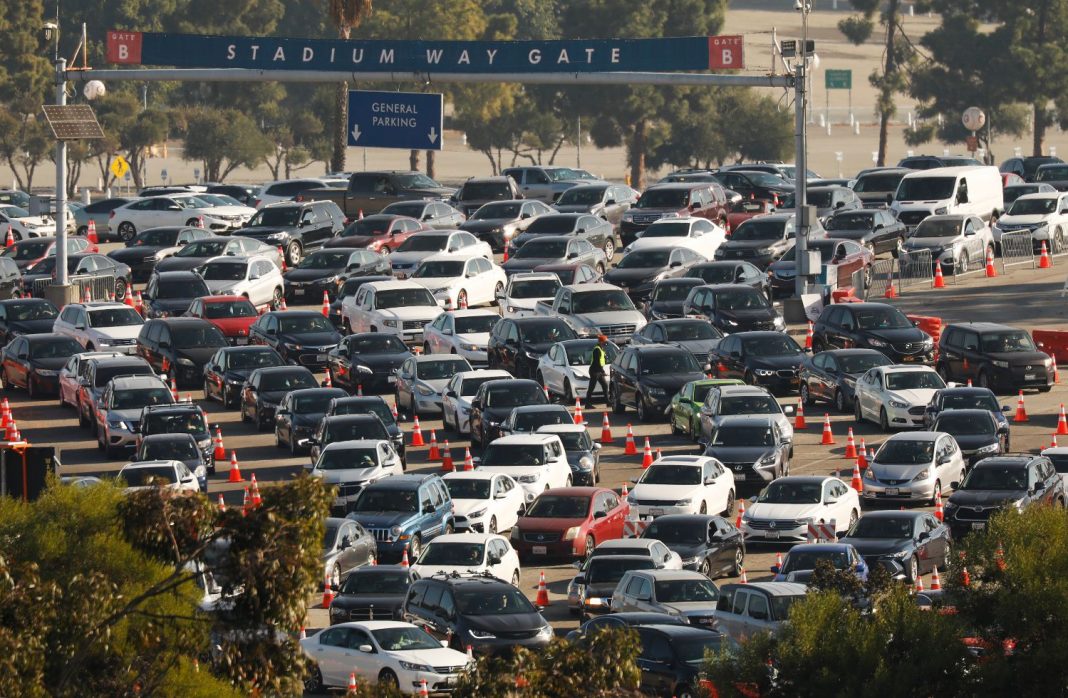 Members of the anti-vaccination mob that briefly halted inoculations at Dodger Stadium last Saturday now say they have no intention of stopping. In fact, some participants tell the Los Angeles Times that last weekend’s incident—in which the Los Angeles Fire Department ordered the Stadium Way entrance closed for about an hour, reportedly for fear the protestors would injure themselves walking into traffic—has only fueled their desire to cause further disruption.

“I’m like, ‘Oh my God, this is totally going to make the news now. This is going to cause a big stink,’” said Jason Lefkowitz, a leader of the stadium demonstration who, before COVID, was a stand-up comic with a waiter job in Beverly Hills and, he says, two studios interested in a script he was shopping.

A year later, he is a devoted Trump follower who believes that Hollywood and Washington, D.C. are controlled by powerful pedophiles. He also led the December anti-mask stampede at Erewhon and is convinced that Hank Aaron’s January 21 death was related to his January 5 vaccination shot, which it was not.

“I want my life back,” Lefkowitz told the Times. “I want to go to work. I don’t want government checks. They have made me what I am.”

Lefkowitz also said that the anti-vaccine mobbing will not stop at Dodger Stadium.

Orange County activist Peggy Hall doesn’t attend protests, but she supports and encourages anyone who’s against business shutdowns, facial coverings, and vaccinations. Working with groups like Facebook’s Shop Mask Free Los Angeles, which promoted the Dodger Stadium demonstration, she too feels that her movement, and its attention-thirsty antics, will only spread.

“I believe things are going to become much more local and vocal.”

Hall also believes that Trump’s election defeat will further embolden, not deter, his followers, and that his special brand of showmanship will continue to inspire them.

Others who were in the stadium mix were in more of a religious mindset. For instance, Lucas Reese Isturiz, a follower of arch-conservative L.A. pastor and webcast preacher Jesse Lee Peterson, who sermonizes that the current culture has left men feminized.

“I don’t even call myself a Trump supporter or a Republican, I am just a patriot,” Isturiz told the Times. “I am just trying to keep order in America.”

But Isturiz’s dedication to order was apparently in short supply on January 6, when Berlinda Nibo, a Black woman, was assaulted and pepper-sprayed by Trump supporters in downtown L.A. Though Isturiz was among the Trumpists that day, he says he didn’t take part in the attack, but had advised Nibo not to approach the protestors after “she gave me the stink eye.”

“Everyone swarmed her,” he said. “I tried to tell her that something is going to happen.”

Isturiz’s recent tweets include a statement that former Navy intelligence officer and South Bend mayor Pete Buttigieg’s only qualification for U.S. Secretary of Transportation is that he’s “shamelessly & openly ‘GAY,’” and an admonition that “Men should never listen to women.”

Omar Navarro, who’s made a hobby of losing to Rep. Maxine Waters in congressional elections, was also on hand at Dodger Stadium last week.

“The left has instilled fear in every American in this country,” mused Navarro, who was arrested in 2019 for stalking an ex-girlfriend. “If you think about it, what they’re doing right here is a mass, mass, massive, massive indoctrination. They want to basically hurt people because this vaccination is definitely not good.”

None of the interviewees specified whether Dodger Stadium was part of their plans for future antics, but the police and fire departments says they’re ready. Outside the stadium, a special protest zone has been set up to prevent future anti-vaxxers from getting hit by cars, while LAPD Chief Michel Moore promises that cops will actually make arrests next time.

“Our action is to be immediate and swift in the sense of holding them accountable for that unlawful activity,” he said.

Why Stigmatizing the Johnson & Johnson Vaccine Is a Bad Idea