Home City Hall Can a Vocal City Hall Critic Win Against a 30-Year Veteran of... 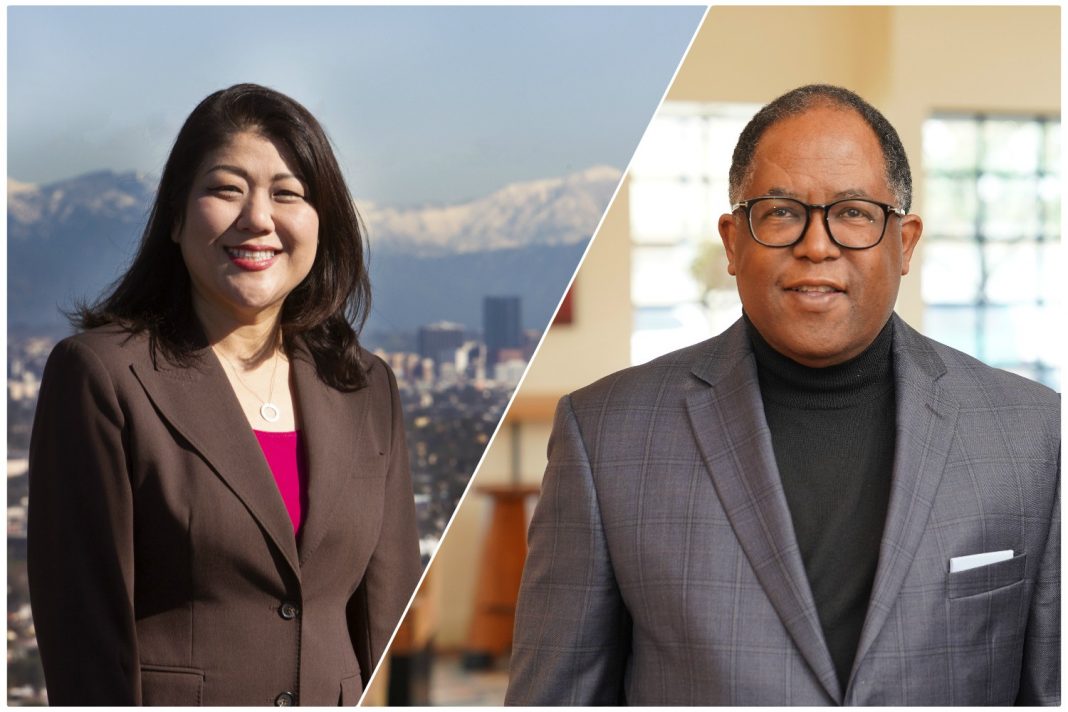 The Donald Trump-Joe Biden throwdown is dominating attention as the November 3 election approaches. That’s as it should be, but here in Los Angeles, the result of the District 10 City Council runoff could have a greater impact on the lives of the territory’s approximately 250,000 residents. Council members help determine key matters such as which neighborhoods receive resources to address homelessness, where new housing projects rise, and what communities see bike lanes and other amenities.

In the run-up to the March primary, Los Angeles looked at the race. Much has changed since then, starting with the fact that the five-person field has been narrowed down to two. As mail-in ballots arrive at people’s homes, here’s a rundown of the race.

For 15 years, the 14.5-square-mile territory has been represented by Herb Wesson, who is termed out and locked in his own tight battle for a County Supervisor post. This means there will be new blood for the district with neighborhoods including Harvard Heights, Mid-City, Wilshire Center, West Adams and part of Koreatown. It’s a park-poor territory, and according to a 2018 “City and Community Health Profile” prepared by L.A. County, 57 percent of district households spend more than 30 percent of their monthly income on housing. Speaking of housing, the reports adds that just 24 percent of district residents own their home, compared to 37 percent citywide and 46 percent throughout the county. The 76 percent of people who rent poses a stern challenge for the next council member, who will take office amid fears of an “eviction tsunami” sparked by the job losses of the coronavirus.

How We Got Here

The March primary drew 47,530 people to the polls, more than three times the approximately 14,000 who voted in the 2015 council race (credit the increase to moving elections to even-numbered years to align with state and federal ballots). Current L.A. County Supervisor Mark Ridley-Thomas skated to a first-place finish, claiming more than 21,000 votes. However, his 44.3 percent of the returns fell below the majority needed to win outright, so in round two he’ll face attorney Grace Yoo, who earned 11,220 votes (23.6 percent). She edged community organizer Aura Vasquez, who had 21 percent. Two other candidates, Melvin Snell and Channing Martinez, were far behind.

Ridley-Thomas has been a dominant player in Los Angeles politics for three decades. His 12 years as a supervisor were preceded by legs in the state legislature and, in the 1990s, on the L.A. City Council (he then represented District 8). He can lay claim to achievements including getting the new Martin Luther King Jr. Community Hospital built, and founding the Empowerment Congress, a predecessor of the neighborhood council system. Ridley-Thomas, who is often mentioned as a possible candidate for mayor in 2022, has a long record of campaigning for racial justice and police reform, and in recent years has sought to rein in a pinballing Sheriff Alex Villanueva.

Yoo runs her own law firm specializing in the field of estate planning, wills and trusts, and before that she spent a decade as executive director of the Korean American Coalition of Los Angeles. She failed in a run for the seat five years ago, and the member of numerous community groups positions herself as a political outsider willing to kick against a crusty establishment. On her website she declares, “For more than a decade, I have been a formidable critic of City Hall, which has failed to follow the law.” She vows to implement “ethical policies” if elected.

The candidates’ websites overlap in listing a cadre of familiar community concerns, including transportation, the environment and the economy. A driving issue—in the 10th and elsewhere—is homelessness. The district has more than 1,900 homeless individuals, approximately two-thirds of them unsheltered, according to the 2020 Greater Los Angeles Homeless Count (the tally was determined before the coronavirus hit the region). Yoo’s prescription for the crisis includes declaring a citywide emergency, erecting tents and shelters on unused government land, and repurposing empty buildings. Although some charge that the situation has worsened during Ridley-Thomas’ political career, he has a history of being more engaged on the issue than most local politicians. He was a lead advocate for Measure H, the county effort to raise $3.5 billion for homeless services, and he co-chaired Gov. Gavin Newsom’s statewide homelessness task force.

Ridley-Thomas boasts the endorsement of the Los Angeles Times and the L.A. County Democratic party, most big labor groups, and the majority of the state’s Democratic party elite, including Gov. Gavin Newsom, senators Kamala Harris and Dianne Feinstein, Congresswomen Karen Bass and Mayor Eric Garcetti. Other supporters range from the L.A. Area Chamber of Commerce to the Stonewall Democratic Club.

Yoo can’t match Ridley-Thomas in terms of prominent names, but she does tout the support of entities including the United Teachers Los Angeles and the East Area Progressive Democrats. Others backing her include Congressman Mark Takano, School Board member Jackie Goldberg, and former Los Angeles City Controller Laura Chick.

Ridley-Thomas raised $831,000 in the primary, vastly exceeding the $254,000 Yoo secured. Round two looks to be similar, as through Sept. 19, according to documents filed with the City Ethics Commission, Ridley-Thomas had pulled in $528,000, compared to Yoo’s $192,000. However, Yoo has more than enough to make her case and reach voters, having already received $189,000 in city matching funds (Ridley-Thomas rejected the municipal money). Yoo even had a slight advantage in cash on hand on Sept. 19, though Ridley-Thomas is likely to see independent groups (which by law cannot coordinate with a candidate’s campaign) drop large sums supporting him.

With his experience, connections, name ID and financial backing, Ridley-Thomas is widely considered to be the favorite in the race. Yet the expected doesn’t always happen in Los Angeles politics—a voter base that will swell even larger due to the presidential election could provide a level of unpredictability.

Then there’s the epic uncertainty of how the tabulation of ballots will be impacted by the coronavirus and extensive mail-in voting. It’s possible that District 10 residents know the identity of their next representative on the evening of Nov. 3, but then again, the counting could continue for days.

RELATED: How One Big Change Made a Huge Impact on Elections in Los Angeles

The Ugly Impacts of the Leaked Racist City Council Conversation