All are important, but each is ultimately only a mile marker in what amounts to a political marathon. They almost obscure two other elements that serve as the gruel and grind of running for mayor—endless fundraising calls (unless your name is Rick Caruso), and a continuous parade of community events.

The latter are easy to overlook, but they can prove fascinating. They display a candidate’s ability to inject oomph into a stump speech they have given dozens of times, and make a series of tiny personal connections during a line of photos and handshakes. It’s the ultimate one-vote-at-a-time tactic in a city of 4 million.

That’s what brought me to a Kevin de León event on Saturday morning. The District 14 councilman and former president of the state Senate has run a steady campaign since launching his bid last September at El Pueblo de Los Angeles Historical Monument.

Held in a parking lot that, depending on who you ask, is either in the community of El Sereno or Hermon, the Saturday gathering celebrated the opening of, well, a campaign office. Low-rider cars with strategically placed de León placards seemed to beg for Instagram posts. There was no line of TV cameras, but there were free tacos and churros. I counted more than 150 adults, as well as four kids and one beagle. 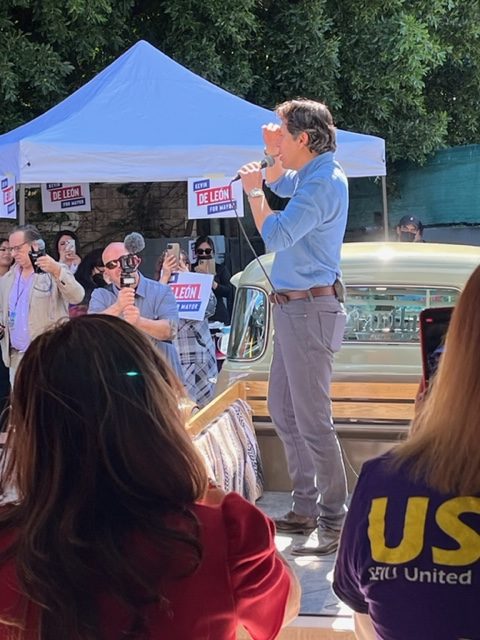 A host in a Dodgers shirt brought up a line of supporters including representatives of labor unions. They kept it short and sweet. “Kevin has always been there for us,” said Teamsters member Oscar Ruiz. “Not just for the Teamsters. For labor.”

The pols in attendance spoke for slightly longer. Assembly member Miguel Santiago touted de León achievements during his time in the state legislature, touching on efforts to protect immigrant rights and ensure access to higher education. “This brother stood up and helped deliver free community college for the state of California,” Santiago proclaimed.

De León, in dark pants and a blue shirt with sleeves rolled just below the elbows, was practiced in his pacing, knowing when to let applause roll and when to push forward. He kept the stump address to 12 minutes, enough to hit his points on what is possible in Los Angeles, but without overstaying his welcome.

An unwritten law of L.A. politics in 2022 is that you must offer digestible solutions to addressing homelessness, even if the crisis is ridiculously complicated, and de León referenced housing projects he opened in the district, including one in El Sereno. Long active in environmental matters, he repeated his frequent if always startling line that the council territory he represents has nine freeways coursing through it, thoroughfares, he said, that “crisscross the district like a serpent that chokes the oxygen out of a young girl’s lungs.”

As campaigns wear on, candidates seek to claim their lane. Councilmember Joe Buscaino first grabbed the idea of requiring people experiencing homelessness to leave tent encampments if they are offered shelter and services (Caruso has latched on to this point). Feuer has hit the good government theme.

De León is trying to secure a spot as the most forceful advocate for working Angelenos. While most every candidate touches on inequality and the wealth gap, de León does so with keen understanding. He has frequently described his upbringing as the child of a single mother who worked as a housekeeper. In his speech he mentioned janitors and hotel employees.

“These are folks who are working their fingers to the bone, the salt of the Earth,” he said Saturday. “They go across town and take care of other people’s children, they clean other people’s homes, cut other people’s grass, serve other people their food. They are the working people of the city of Los Angeles.”

I ask de León about this the next day, questioning if those he cites are being overlooked in a race increasingly dominated by the topics of homelessness, housing and public safety. He uses the question to look at a wider swath of Los Angeles.

“The people who actually make this city go are often treated as if they’re invisible, only valued for their labor and nothing else. That’s not the type of city I want,” he says. “The question is very clear and straightforward. What kind of city do we want? Do we want a city that works only for the super wealthy and the elites? Or do we want a city that works for people like us, working people, middle-class people? Because if Boyle Heights does well, then so does Brentwood. If South L.A. does well, so does Sherman Oaks.”

It’s a thoughtful message, but will the idea resonate, and will his platform be enough to propel him into the top two in June and advance to a November runoff? He has the ability to win people over, and at the end of Saturday’s address the crowd erupted into chants of “KDL! KDL!” And indeed, after the speech he gripped and grinned with everyone who approached. He’s also the only mainstream Latino candidate in a city with a huge and growing Latino population—he has a solid and potentially sizable base.

But there are just as many hurdles. U.S. Rep. Karen Bass is widely cast as the frontrunner. Caruso will probably throw eight figures of his fortune at the contest and is likely to appeal to conservative voters. Feuer and Buscaino each have a base of support and have displayed a willingness to scratch and claw for every vote.

Right now, while many people may have ideas about where things stand, credible info is elusive. An L.A. Times poll released in February had Bass in first place with 32 percent, and de León and Caruso tied for second with 8 percent. But a Loyola Marymount University poll released this month cast a far different picture, giving Bass 16 percent and putting de León second with 12 percent. Buscaino, Feuer and Caruso were all in single digits.

Adding to the uncertainty, at least 40 percent of voters were undecided in both polls, and each came before Caruso started his ad blitz. Plus, those sampled do not necessarily line up with who will go to the polls.

Everything will change in the coming months, and this really is go time. Somehow, it is now less than 60 days until mail-in ballots arrive, and under three months until the June 7 primary.

That’s a short timeframe, but also long enough for more community events, stump speeches and photo ops. One vote at a time.

Why L.A.’s Next Mayor Won the Election Is Obvious—She’s Karen Bass

Los Angeles 2022 Election Results: Not All Progressives Are Created Equal