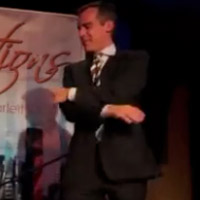 In the months since he declared his candidacy for mayor, Los Angeles City Councilman Eric Garcetti has been called plenty of names—like youngish, smart, and as polished as they come. He’s answered tough questions about how he’d curb runaway production, create jobs, and work with small business owners to make it easier to open up shop in L.A. And he’s vowed to meet criticism with positivity. But he hasn’t done the robot—until now.

Garcetti sat down for a Q&A with Los Angeles Wave’s Starlett Quarles on October 5, and when the topic of his having been in a breakdancing group in high school came up, the 41-year-old Columbia grad stood up—and promptly got down. In this video clip, he spins, shakes, pops, locks and—while his performance is more hipster-at-your-cousin’s-wedding than America’s Best Dance Crew—showed there’s a little edge beneath that softie exterior. Somewhere, Wendy Greuel is practicing her Samba.