Home Uncategorized Disaster Awareness: What the Boston Bombings and the London Soldier Attack Can... 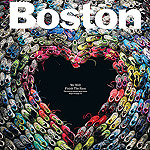 The other evening I was at a dinner with John Wolfson, the editor-in-chief of Boston magazine. I took the opportunity to commend John on the magazine’s May cover, which featured a series of shoes worn by participants in the Boston marathon that were artfully arranged into a heart. It was a simple, deeply moving tribute to the resiliency of the city in the wake of the recent bombings. I asked John how the city was doing, and it led to several discussions, including one about guilt. He alerted me to a story in the Boston Globe—which has done Pulitzer-worthy coverage of the bombings and their aftermath—that was about those who were there that day and didn’t rush in to help.

Those of us gathered for dinner agreed that there were two types of people: those who run into the chaos, and those who run away. Which are you? we asked each other. We agreed that it would be impossible to predict, and most definitely depend on the circumstances. Living in a city the size of Los Angeles, I’ve stopped for any number of traffic accidents; I’ve aided a few people who were clearly mentally ill and having some sort of breakdown on a bus or a sidewalk; I’ve tended to a stranger who has passed out on Halloween. But I’ve obviously never experienced anything like the horror of a bombing. One dad at the dinner hypothesized—though couldn’t guarantee—that were he to be confronted with a situation as terrifying as what happened on the sidelines of the marathon, he would have jumped in to help, but probably not if he had his children with him; in that case he would have run as far and as fast as he could. As a mom, I completely understood and guessed that I would likely do the same.

I thought about all of this as I read the story in London’s The Telegraph about Ingrid Loyau-Kennett, the 46-year-old mother of two who, upon seeing the mutilated body of an English soldier on a Woolwich street this week, stepped off her bus to tend to the victim—it was too late, there was nothing she could do—and then rather than run, she confronted the man’s two attackers. They held a revolver and bloody cleavers; their hands were caked in blood. Yet there Ms. Loyau-Kennett stood, attempting to calm them with her words, asking them about their motivations, why they did this. She was worried, she said, about who could become their next victim, and concerned that school would let out soon and the street would be overrun with children. “Better me,” she said, “than a child.”

Ms. Loyau-Kennett might have saved lives this week. Had her own children been with her, I have the feeling she would have still stepped off that bus. Obviously you don’t need to live in a big city to worry about unforeseen threats, manmade or otherwise. But you have to ask yourself: Would you run into the chaos, or would you have run away?

A Welcome to Topshop from a One-Time Londoner