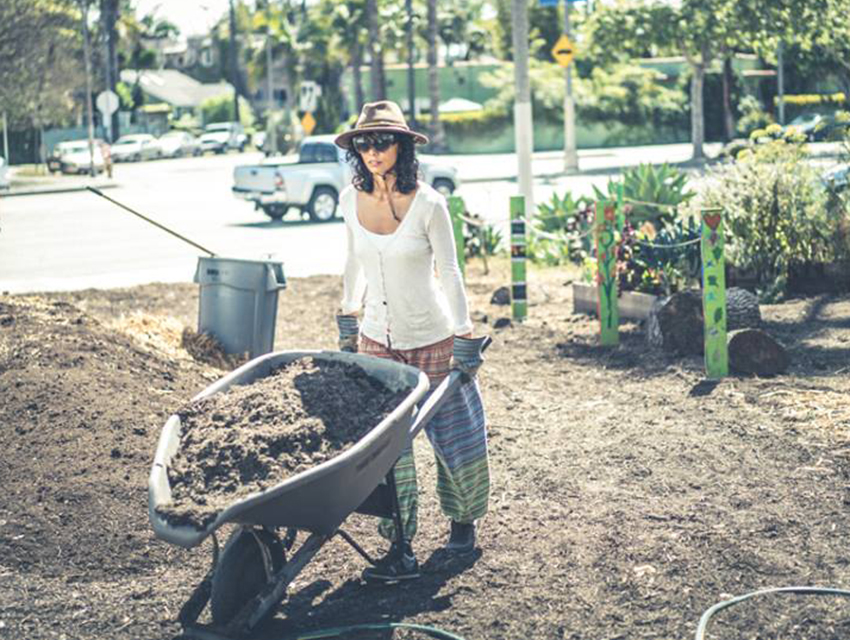 Cafe Gratitude co-owner Ryland Engelhart thought he was a hip, eco-savvy California restaurateur when he attended a panel discussion on climate change in New Zealand. But then one speaker presented a simple idea that had never crossed his mind: healthy soil might be our biggest resource in reducing atmospheric carbon. Back home, Engelhart joined forces with Finian Makepeace to form Kiss the Ground, an organization focused on drawing attention to a CO2 solution that’s, as he says, “right under our feet.” Recently, he teamed up with Jason Mraz to create a video explaining the science of soil-as-climate-savior.

Drawing from the research behind the Marin Carbon Project, Engelhart explained that higher percentages of organic matter in our soil mean more carbon is being sucked out of the air and deposited into the ground. This results in a higher density of nutrients in the soil—and thus, more nutritious food—as well as a healthier atmosphere. Farmers can up their soil game by planting cover crops, composting, not tilling the soil (it destroys the living network of organisms in the dirt), rotating crops, and planning grazing to keep cattle from completely depleting the grass.

In the video, Mraz urges viewers to sign a petition asking the California Legislature to use $160 million of the Greenhouse Gas Reduction Fund to get our soil back up to snuff. Specifically, those dollars would go toward:

• Paying farmers to adopt soil-friendly methods of growing their crops

And for us non-farmers? There are ways we can contribute to the effort, too, Engelhart explained.

Composting: “Compost is a very basic system that needs to be in place in all urban centers. We need to stand for municipal compost as a bottom line, whether we’re doing it our backyard, which is awesome, or utilizing our green bins and making sure that all of our green waste goes back into soil.”

Shopping Organic: “Organic agriculture is not necessarily agriculture that is sequestering carbon, but it’s definitely much less impactful on our environment. So obviously, supporting local organic farmers and asking those farmers, are they using compost to build soil, are they doing regenerative agricultural practices, are they using cover crops? By becoming interested in how your food is grown, you can actually support the people who are doing best-case practices. Soon, in the next two to three years, I think we will have food that will be certified climate-safe. Patagonia already has a line of products that is communicating this sensibility. Cutting edge companies like Nutiva are seeing this opportunity for a new label that just says ‘the way that this was produced actually sequestered carbon instead of releasing carbon.'”

Spreading the word: “Before science changes, before politics change, there has to be a new public perception and a new understanding. So what’s inspiring is when there’s a new conversation in town over a meal: “Hey, do you know that the way we grow food can pull carbon out of the atmosphere?” When people are talking about the way that we grow our food, fiber, and fuel, that can actually be part of the tool kit for mitigating climate change.”