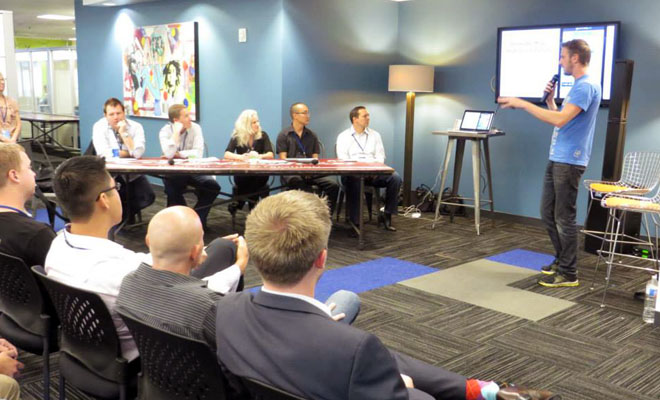 Presenters in the Startup Showcase had three minutes to explain why their company should be "The Next Big Thing."

Silicon Beach Fest, L.A.’s first and largest startup entertainment festival, turned Santa Monica into a techie mecca for most of last week. Featuring guest speakers, panels, demos, and a hackathon (more on that later), the event celebrates our city’s blossoming technological scene and strives to prove why L.A. was voted into the number two spot for “Best Startup Cities.”

As much as it is a stage for the new Steve Jobs’ of the world, the event also serves as a discussion platform for those hoping to find success with their startups. If you missed the fest but want the highlights, we’ve got three infobytes worth downloading:

1. The art of the Startup Showcase.
Representatives from new startups are given three minutes each to pitch their ideas in front of a panel of judges (and a room full of competition). We witnessed everything, from people forgetting their lines to the formidable diatribes of 19-year-old CEOs. It was basically the American Idol auditions of the tech world. There were some standouts, though, including apps that connect you to movie discounts, rentable designer bridesmaid dresses, and daily original short stories.

2. Hackathons are not as dangerous as they sound.
No, hackathons do not involve knives—or even very sharp scissors. According to Ron McElroy, CEO and founder of Real Office Spaces (where SBF 13 was held), a hacakathon is actually a contest where teams are given a piece of intellectual property and a set amount of time to figure out how to turn it into a company. “People brought sleeping bags. Some of them were up for 48 hours straight,” McElroy said of this year’s event.  Sounds like a small price to pay when prizes for hackathons can run up to $100,000, as well as the rights to start a company based on the plans made during the contest. This year’s winner was Cooper Harris with the app It’s A Date.

3. What’s next, robot glasses?
Many of the startup ideas discussed at the festival relied on new Apps, but some were already thinking beyond smart phones and tablets. There was talk of a pill that uses your DNA to make your body the password for all of your devices. Google is developing glasses that house a miniscule computer, on which is capable of responding to human speech. Technology isn’t the only thing changing; the job market demands more skill-driven innovators. During a panel called “How to Make An App For That,” Hunter Gray, CEO of Atlas, summed up the spirit of the festival when he said, “Now it’s cool to be a CS major. Nerds are running the country.”