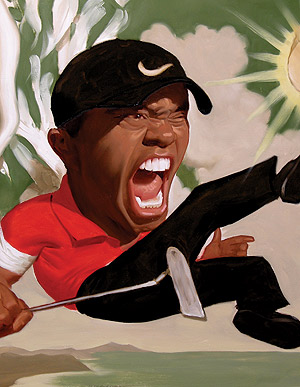 Never, it seems, has someone so exalted, so celebrated, and so talented fallen so far. What’s happened to Tiger Woods is downright Greek: hubris bringing the hero to his knees. The über-cool demigod of golf turns out to be a compulsive swinger on and off the links. At some point in every conversation I’ve had since the fateful crash, his name has come up. My female friends express anger, incredulity, disgust—and gratitude that their own mates aren’t similarly unfaithful and reckless. It’s that whore-Madonna thing, they say, looking at the parade of party girls—not to mention soft-porn stars—he apparently bedded. Yuck, they say as one. I don’t ever want to see him again; I don’t care how gifted he is, how singular.

I have to confess to the same reaction, to a full-blown revulsion, similar to the feeling I had when news broke of Kobe Bryant’s sex scandal in 2003. Charged with raping a young woman, he settled out of court after tearfully admitting—his wife at his side (Go, Jenny Sanford!)—that while there was no force involved, he had committed adultery. For a minute I thought, OK, I love the Lakers. They’re my home team—and winners, too—and yes, he is hardly alone in the NBA when it comes to such behavior. But in truth I was offended. I like to think I don’t have a prissy or puritanical bone in my body, but I haven’t felt the same since about the team, and certainly about him, no matter his athletic prowess. I am not the Lakers fan I was, not by a long shot. There was a swaggering, cheesy quality to his response, replete with his conjugal apologia that came in the form of a giant diamond ring bestowed on his wounded wife.

I knew men just as troubled by Bryant’s behavior as I was, and many are now exasperated with Woods. Sure, the jocks enamored of his abilities make semi-excuses, the old boys-will-be-boys stuff. Look at him, they say. What did you expect? He owns the world; girls are throwing themselves at him. But others are saddened at the example he has set and the distrust he has sown in the minds of women by affirming the stereotype of men as cads. They, too, are bothered on
a gut level, feeling that he betrayed not only his wife but their gender. I have heard my sometimes-retro husband be quite vocal about Woods’s lack of character—the compulsive philandering along with the reports of his patronizing a doctor suspected of handing out performance-enhancing drugs.

Underneath it all, even for the Woods defenders, there is a sense of bafflement that anyone with such gifts could risk destroying everything. We cruised the tabloids and blogs for the salacious details, listened to the yappy entertainment talk shows dissect his moves, knowing all the while the Woods story was of bigger stuff. We need a Shakespeare or a Sophocles for this one. Just what was he thinking? It defies the imagination that he thought he could get away with this. Who is Tiger Woods? The larger question: Does he know who he is? One wonders when he started to dissemble, to hide part of himself. He has always seemed a bit cold, coiled, something in him withheld. Catch his face in repose and there is a hard shell to it, behind it the steely eyes of a champion athlete. For all the accolades he earned, Tiger Woods has never been—nor wanted to be—lovable; he has never wanted to be exposed. He gave us the triumphs, the smiles, the sound bites about being a family man above all else even as, we have learned, he was partying hard on the side. But how early did the falsity begin, and how deeply does it extend to other areas of his life? There is a sense with these prematurely extraordinary stars that as the sports talents get nurtured, another part remains underdeveloped. Add in, of course, the entitlement that comes when everyone is fawning over you from an early age. He may finally be railing at the fates, castigating the prying and the prurient for persistently unearthing his sexual escapades. Or he may at long last be doing some primal reckoning, trying to figure out what compulsions have been driving him and confronting the appetites that have brought him such shame and, one can only assume, such sorrow.

The shorthand explanation we have glommed on to is that he is a sex addict, not unlike Bill Clinton. Both are men of consummate success who could not stop themselves (or didn’t) from risking family, reputation, standing, all for a quickie or two—or 50. Such behavior is riveting in its high-wire brazenness, its flirtation with disaster. Perhaps, for Woods, there is actually a humiliation-filled exhalation now that he has been found out, now that the sex circus has come to a halt. You must live at that level—like Clinton—with a thrilling, aphrodisiacal fear in the pit of your stomach each time you engage in another tryst, unbutton your shirt, or unzip your pants. The stakes are so high. For any adulterer, there is the transgressive kick of the forbidden, but for someone who is such a global persona, with all the goodies and perks that implies, the risk factor is off the charts. It even looked, in Woods’s early Web postings, as if he thought he could just, well, Tiger his way through by asking for privacy and for time to repair relations on the home front.

For insight, he might do himself the favor of reading Andre Agassi’s recent memoir, Open. It offers a fascinating comparison, the redemptive tale of another prodigy who hit bottom and came back up. Not that their addictions were the same: Agassi had a brief infatuation with crystal meth. Both men started their long sports quests as toddlers under the tutelage of very strong—in Agassi’s case, abusive—fathers. The tennis star says flat out that he was scared of his Iranian-born dad and hated the game, though winning matches in order to please that autocratic father became important, second nature. On the back of the book jacket is an adorable picture of a seven-year-old Andre with a racket, but you can see the terror in his eyes.

After being shipped off to a famous tennis academy in Florida, Agassi dropped out of school in ninth grade. He rebelled, let his hair grow, pierced his ear, began wearing crazy clothes…and started winning. He says he didn’t know who he was, hadn’t had time to take his own measure, so fixated was his father—and he—on the chase for glory. Living in the narcissistic bubble that surrounds a star, he became a lopsided human being, seesawing between his drive for athletic perfection and self-destruction. Tiger—are you listening?

Agassi turned briefly to drugs, had a lonesome first marriage-for-show to actress Brooke Shields, and ultimately made peace with his career as it hit a final glorious high. He divorced and remarried someone on his own wavelength, tennis star Steffi Graf, and his later years have been anchored by family and philanthropy. Now comes the book, and it’s far beyond the standard mea culpa-laced confessional meant to curry public favor. Agassi hired a real writer,? J.R. Moehringer, a writer-at-large for this magazine and author of the luminous memoir The Tender Bar, to help craft his story, thus lifting his recitation of woe and redemption out of the pop-junk genre and into another literary league.

So can Tiger pull an Andre? He’ll have to confront himself with the same hard and honest eye Agassi has brought to bear. Unlike Agassi, Woods has always said his father was his best friend, but Earl Woods was plenty strong-minded, a Vietnam vet with definite moral standards. Woods senior said his purpose wasn’t to raise a golfer but rather a good person. There’s much now that would shock him—that proud papa who died in 2006. What happened to his perfect boy? Did he have an inkling of his son’s predilections? The mother, Kultida—she was the tough parent, Woods has been quoted as saying. She was the disciplinarian, the one who spanked the misbehaving child. According to various reports, she and his bride do not get along. The dance they are doing now—mother and wife—must be fiercely complicated.

Everyone is watching to see what Tiger Woods does now. He can always throw money around to placate spouse and lovers and then, when the worst is over, emerge on national television to offer up teary-eyed confessions to Oprah, the nation’s queen of redemption. The truth is, Tiger Woods doesn’t have a public relations problem. He has an existential problem, an issue of character. Sure, he needs to deal with the loss of sponsors and other professional matters. He has a staff for that, lawyers and managers and agents. But the real work is the emotional stuff, and nobody can handle that for him. Hard to know whether he can do it; hard to envision this emotionally controlled superstar letting down the armor and going to the painful places; hard to foresee his writing a book like Open. At least he’s blown apart his suffocating image. Maybe he can breathe a little now, though every breath must come with a shiver of shame. If he isn’t feeling that, then he is beyond help.

The common wisdom has been, if he starts playing and winning again, we—his public—will embrace him. Of that I am not so sure.