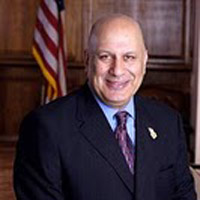 City councilman Dennis P. Zine today announced his candidacy for Los Angeles City Controller in 2013, making him the first to officially seek the office now held by Wendy Greuel. Greuel has thrown her hat in the ring to be L.A.’s next Mayor.

In a statement Zine said “we need a tough controller for these tough times. The residents of Los Angeles deserve honesty and responsible financial practices and I plan to give them just that.”

Zine, a former police officer who has served on the City Council for over a decade, was in the news recently for switching his political party affiliation from Republican to “decline to state.”