Home Politics Who’ll Make It to the Next Round of Dem Debates and Who’s... 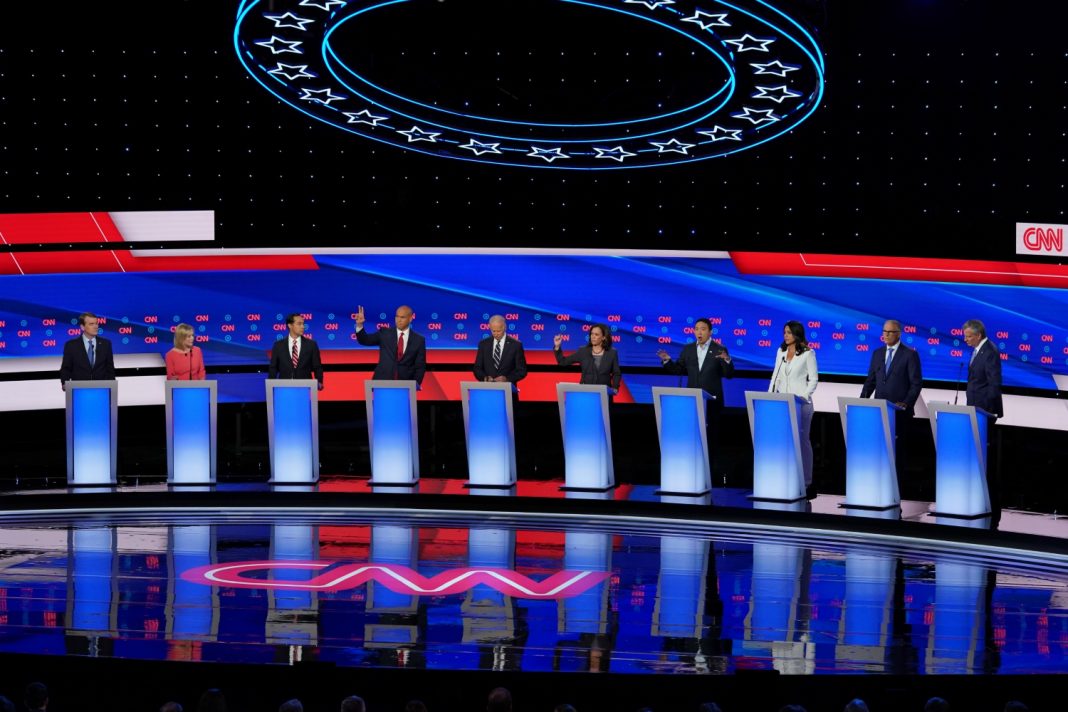 More than half of the presidential hopefuls who took the stage over the last two nights during the second round of Democratic Primary Debates won’t be fighting it out in the third round of debates next month. In order to qualify, candidates will need to have 130,000 donors and register at least 2 percent support in four polls by August 28.

This will come as sad news to Hawaii Rep. Tulsi Gabbard’s ardent supporters, as she had one of the standout moments in last night’s contest in Detroit. Blasting Kamala Harris’s record as District Attorney of San Francisco, Gabbard said, “I’m deeply concerned about this record. There are too many examples to cite but she put over 1,500 people in jail for marijuana violations and then laughed about it when she was asked if she ever smoked marijuana. She blocked evidence—she blocked evidence that would have freed an innocent man from death row until the courts forced her to do so. She kept people in prison beyond their sentences to use them as cheap labor for the state of California.”

Team Tulsi seized on the moment immediately. Within minutes, her supporters received a link to the clip with the text message: “TULSI2020: Tulsi just scorched Kamala on criminal justice at the #DemDebate – catch it here and chip in to keep Tulsi on the debate stage.”

Also seemingly out of the running is New York Senator Kirsten Gillibrand, whose would-be viral moment didn’t go as well as Gabbard’s. When she went after Biden for a 1981 op-ed piece in which she claimed he was critical of working mothers, Biden pointed out her former support of his record on women’s rights. Biden’s response ended up scoring points.

Still, Biden started the evening with a gaff, telling Kamala Harris, “Go easy on me, kid.” She later told Anderson Cooper, “I didn’t think much about it to be honest with you…I’m pretty clear about who I am, so nobody’s going to define me on that stage.”

Sen. Kamala Harris on Joe Biden's "Go easy on me, kid" comment: "I didn’t really think much about it to be honest with you… We’re both on that stage running for president so, I'm pretty clear about who I am, so nobody’s going to define me on that stage." #DemDebate2 pic.twitter.com/XRH2IttSjG

Still hanging on by a thread are former housing secretary Julián Castro and entrepreneur Andrew Yang, who have surpassed 130,000 donations and have three of the four polls they need; Minnesota Senator Amy Klobuchar has met the polling threshold and has about 120,000 donors.

If Yang—who showed up without a tie last night—doesn’t make the cut, fans can remember him with this classic piece of election memorabilia.

For the American who cares more about financial security than my neckwear. #DemDebate2 https://t.co/S1oBxaQ6kx pic.twitter.com/LtzYmA9bcI

RELATED: Kamala Harris Wants to Stop ICE Detention—and This L.A. Org Has Her Back