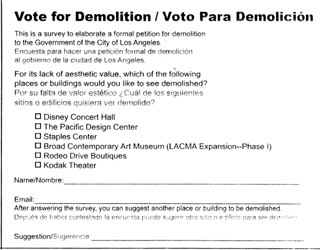 When Laurie Pike brought this “Vote For Demolition” form she had picked up at the Standard Hotel downtown into our offices late last week, I blanched. The form, which is written in English and in Spanish, introduces itself as “a survey to elaborate a formal petition for demolition to the Government of the City of Los Angeles,” and asks, “For its lack of aesthetic value, which of the following places or buildings would you like to see demolished?” above check boxes for Disney Concert Hall, The Pacific Design Center, Staples Center, Broad Contemporary Art Museum, Rodeo Drive Boutiques, and Kodak Theater.

A much-transferred call to the hotel shed some light on the form, which it turns out is part of a multi-media art installation by Gustavo Artigas. According to LAXArt’s Web site, Artigas is collecting data online and with on-site voting booths like the one Laurie saw at the Standard with plans to eventually file a petition and produce a video simulation of the “winning” building’s demolition. The point of it all? To better understand “how locals see their own environment and about the democratic possibilities of changing it.”

I happen to love performance art (no really, I stick up for Yoko Ono every chance I get simply because of Cut Piece) and I do think it’s important to consider the ways we all construct and deconstruct our city’s landscape, but I also love Los Angeles, and the idea of considering which of our most iconic buildings to demolish—even in theory only—when there are so many to save and build makes my stomach flip. Of course, that’s the work of powerful art. As Michael Kors would say on Project Runway, It’s a matter of taste.

What do you guys think?