Home Essays An Untimely Death Moves Through a Family Like Wildfire 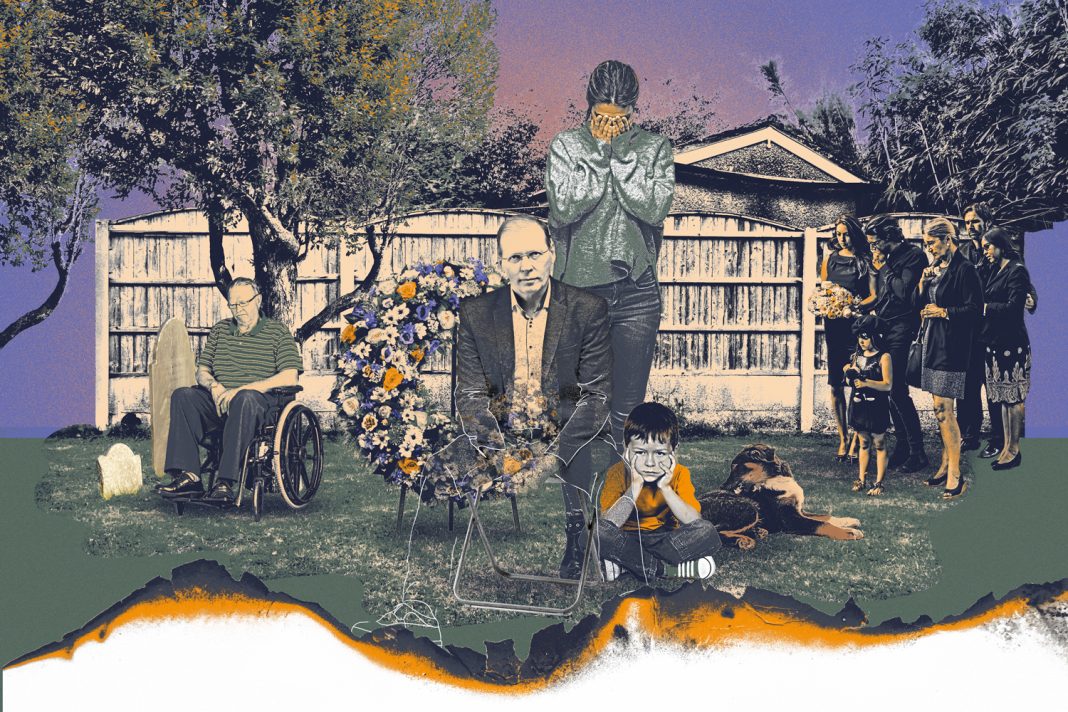 In 1900, when the average white American man died at 47, my brother, John, would’ve been considered old, the victim of an old man’s fate. These days, actuarial tables figure 58 is still young; had things gone differently, John should’ve made it to 80. Did he have trouble breathing that day? Shooting pains? A finance executive, he’d driven himself for years with long days and nonstop travel. He was the guy people counted on, the one who never said no, which he seemed to believe was crucial to his becoming managing director of a major bank.

Outside work, though, his life was a mess. This became apparent gradually in the days after he failed to wake up in a city he’d traveled to for work. Picture this: A man with business and law degrees dies without a will, leaving a wife he’s always told people was a fellow lawyer, but who in fact has little education, a sketchy work history, and speaks minimal English. He has not just one dependent child, as he’s claimed to family and colleagues, but also two stepchildren and less money than he might, given the above. His wife thinks that his parents, from whom he’s been estranged for years, are dead. They meet for the first time at his funeral.

Over the next months, the shock would crush my ancient parents. Mom fell and broke her back. Dad took to bed, went into a tailspin. It happens. The body loses its ability to carry the heart.

In John’s Chicago living room, the portrait of him—funereal, softly lit—showed an overweight, beat-up version of him I couldn’t imagine actually sitting on the damask sofa below it. He’d sent me jpegs, some of his pretty wife, mostly of his five-year-old son, who, when we finally met, wore a little rep tie, chinos, loafers—John clothes.

Isn’t he the most beautiful child you’ve ever seen? John would say, rushing to catch a plane, his slightly slurred, full-on verbal charge a legacy from his childhood stutter, which got worse when he drank but persisted long after he stopped. He needed an audience but had no time for friends. Just me. I had a son, too; I’d understand.

My son, who hardly knew John, didn’t come to Chicago. My husband and I had knots to unravel. John had handled all the household business, in a manner of speaking, stuffing check stubs into bags in his closet, which was off-limits to his wife.

My husband, Rob, and I sorted bills and helped track down money. My long-divorced parents mumbled together in a playroom, Mom patting Dad’s face, fierce with Parkinson’s.

In a bathroom big enough for a king-size bed, I opened a cabinet. Nothing with alcohol. John was in recovery.

How could anyone know anyone?

At John’s funeral, colleagues talked about a team player who listened. One woman said he’d called her repeatedly after Hurricane Sandy hit. “He was a mentor,” said someone else.

To hold up my family’s end of things, I described John as a funny boy who loved popsicle jokes. I recalled a detective game, “Bill and Ben,” we’d played every day for a summer, pretend-smoking, -drinking, and -swearing as we nabbed a criminal named Slippery Sydney no one else could catch. In case he was listening, I praised John’s professional triumphs, his devotion to his family.

My family hadn’t seen him in years until the day before, when we’d “viewed” him in his box, mute and stiff with buffed skin, glued lips, and a copper-orange pompadour. (When did he start coloring his hair?) Even I, the only one he was still talking to, got only phone time.

I kissed his alien, refrigerated brow, and he had to lie there and take it.

So much has happened since. Once you die, the world spins on heedlessly, except for those who love you—but then they die. My parents’ death exacerbated my feelings of emptiness. I was stunned by the pileup, a devastation that found echoes everywhere—in our lying, tyrant-loving, white nationalist president; in the mutual slaughter of Buddhists and Muslims in Sri Lanka; in Syria, poisoning its own people with chemical weapons; and, closer to home, in wildfires raging across California. Every day, newspapers showed charred woods around Mount Shasta, wiped-out farms near Mendocino.

Once you die, the world spins on heedlessly, except for those who love you—but then they die.

There’s been no letup since in terms of presidential horrors, global unrest, or nature signaling climate change with earthquakes, hurricanes, and more pyrotechnic fury. So much of California has gone up that authorities have begun lumping individual blazes into “complexes.” Each flame symbol on a map might stand for hundreds of homes, businesses, personal tragedies, which, for those living through them, are all there is. John wouldn’t recognize the world he left.

When I google my brother, I’m surprised by how little I find: one entry about a charitable donation. There’s nothing about his job or his wife or son. John passed away in July, says the funeral home’s website. John was a resident of Chicago. Another item describes a 35-year-old with the same name arrested for forging checks in Alabama, the kind of fate our dad—a depressed ex-Marine who was in and out of work, and drank—used to warn John about if he didn’t get cracking. John was a sort of do-over for Dad. But John was John. Unable to sit still in school, slow to tie his shoes.

When we were kids, John liked to tell me he had another, better, real family out there. Or that he was actually a dog, or a spaceman with a computer for a brain. On summer nights, to worm his way into my room, he became a stand-up comic. Why did the banana go to to the hospital? What did the light bulb say to his mother? His timing was perfect. I’m not peeling well! I wuv you watts! You could see he believed he could be Johnny Carson. Or an astronaut like that other John.

He’s buried in a cemetery on the North Shore of Chicago that I probably could find again but won’t. Edged with trees and a golf course (he loved to play but had no time), the cemetery was cold and raw as we gathered, my family in one group, his in another. Once the coffin was lowered, we took turns tossing roses in, even Dad, who got up from his wheelchair and swayed over the hole. After, heavy machines scooped the dirt in and pounded it down. John’s grave, one of hundreds, could have been anyone’s.

I remembered times when I’d been mean to him, beat him up, mocked his stutter, felt happy when he cried. Families, like societies, have scapegoats; I’ve read this on the internet—about the one who carries the discontents of others. Well into his recovery, John had sent Dad AA’s Big Book. Dad returned it. Your problem, not mine.

If only we’d known.

I’ll always love you. I’m sorry, I scribbled in the note I dropped in his coffin, encouraged by the mortician. Probably what the others said.

Years ago, in my work as a design writer, I did a story on a house overlooking the Pacific. The owners described it as their “dream,” conceived with everything they’d ever wanted—a giant master suite, a motor court for party guests.

After the story hit, so did one of the great Malibu fires. I called the architect who confirmed the couple had lost the house but were already planning the rebuild on the same footprint. What were the chances fire would strike the same place twice?

That was before Al Gore’s truth. The endless drought. The hottest summer on record. El Niño cycles that release heat from the sea into the air. Repeated evacuations from the same towns.

We never know. We keep the trunk packed, people say. As one Vietnam vet put it after getting out with his heirloom clock, his late mother’s rifle, and his dog, I’ve been shot twice and blown up twice, but a goddarn fire, that’d be a real pisser, wouldn’t it?

After the funeral, I took Mom on a trip to recover. I went for a walk, leaving her alone long enough for her to topple down some stairs and wind up in a hospital.

John’s two families barely spoke again, except one day when his wife surprised Dad by popping in with his grandson at Dad’s nursing home, bringing balloons. Dad went on a tear and changed his will to make extra gifts for her, the grandson, the stepkids, and also, puzzlingly, the Masons, a group he’d joined as a young man but seemed largely to forget. He also made a small one, unexpectedly, to Mom.

Soon afterward, he was buried on a California hill, accompanied by a color guard of Marines. Mom, who died last, is part of our garden, with our old dog Molly, their ashes feeding daffodils.

The fires keep burning. Every day new maps in the paper, new flames spread across the pages. Some survivors say they’ll build again, on lots that resemble singed, denuded skin.

But it’ll be years before the forests return, the oaks and redwoods, the Joshua trees. Who knows who’ll be there to see them when they do? Now we notice them in their absence.

Impermanence is the essence of everything, writes the Buddhist teacher Pema Chödrön. Reflectively, she adds: Could our minds and hearts be big enough just to hang out in that space where we’re not entirely certain about who’s right and who’s wrong?

We lived like blind fleas on a dog’s back. It’s easy to recognize now how small the dog was and at the same time, that he was all, everything. Lovely and wrecked. Honest and lying. Loving and savage. And then the wind came, and the flames, and he was gone.