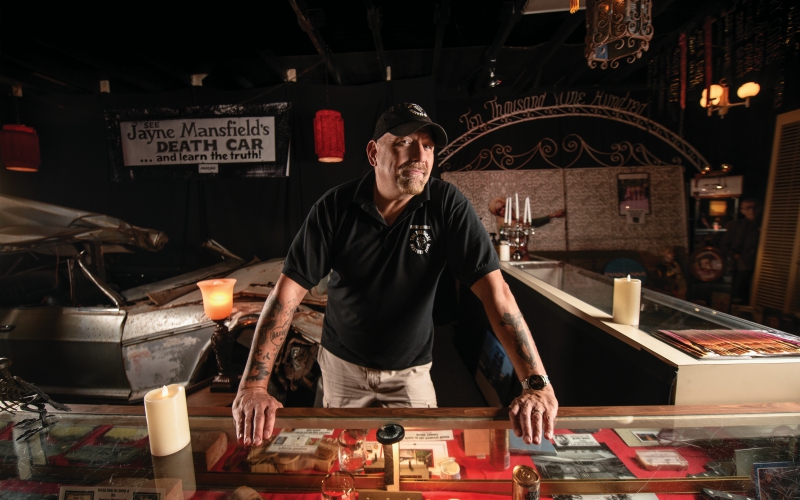 Scott Michaels of Dearly Departed Tours on what it’s like leading visitors into a dark corner of L.A. History. (As told to Chris Nichols)

I was in Chicago, selling celebrity tombstone T-shirts by mail order, when I saw Grave Line Tours on Entertainment Tonight in 1987. A tour that took you around to where dead celebrities are? I said, “That’s my dream job,” and hounded the owner until he hired me. I started my own in 2004.

We deal with dark subject matter but in a respectful and lighthearted way. We have tours dedicated to Jean Harlow, Marilyn Monroe, and the Manson family. We lead six two-hour tours a day, seven days a week, for groups of 15; I usually do one or two myself, and I have three other guys who lead them.

About 30 percent of our guests are locals; most of the others are from England and Australia. We get a lot of single riders because their spouse isn’t into it. We also have a museum with bits of horrible history like Sharon Tate’s fireplace and Jayne Mansfield’s car. I’ve had only one person vomit, and it was probably motion sickness more than the subject matter.

American Horror Story ripped us off—um, borrowed very heavily—and that’s kind of cool. They had a recurring character based on me who led these same sorts of morbid tours in Hollywood. He was great, and, weirdly, we’re now friends.

When some people see the craziness of Hollywood Boulevard, they say, “Oh my God, look at what Hollywood has become!” Others say, “This is the greatest place in the world.” About 20 percent of the places on my original tour are gone now, including the Ambassador Hotel. Not only is Hollywood tearing itself down, but it’s making it so we can’t show the places that are still around.

We are no longer allowed in Beverly Hills. It’s heartbreaking. They’re enforcing these archaic laws about weight restrictions. I can empathize with the residents but wish we could be grandfathered in. I go to the meetings, but we’re basically dismissed as the enemy.

A lot of people assume we stop to go inside the houses. If the homeowners are outside, I usually smile and wave, and occasionally we’re invited in. Once we went to the location of the death of Albert Dekker—he was in East of Eden with James Dean and died spectacularly of autoerotic asphyxiation. The woman who lives there now let us into her apartment for 50 bucks. Later we saw her on a reality show, chewing her own hair. I love L.A.

After the Manson Murders, Los Angeles Magazine Blamed the “Age of ‘Freaky’ Crime”