Home Real Estate When This L.A. Couple Bought Their Dream Home, They Also Bought a... 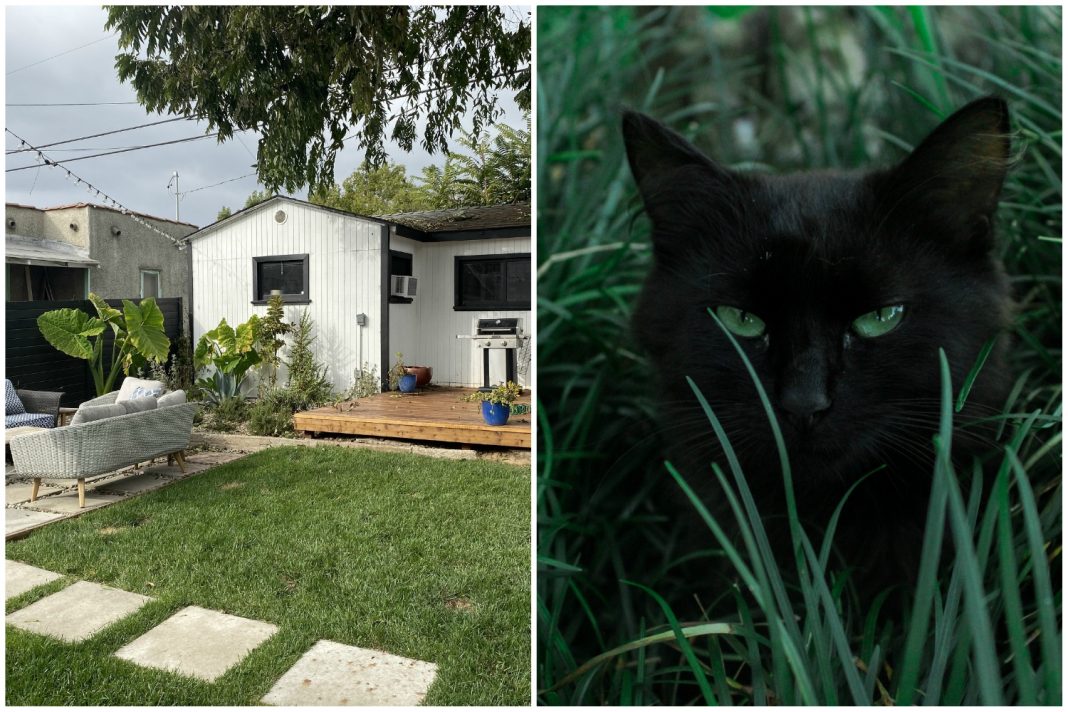 It was a Saturday morning in April, and Zack Whedon had committed himself to a little yard work. Whedon, 40, a screenwriter with a boyish face and auburn hair, decided to plant sage and lavender and rosemary in the garden of the Highland Park home he had purchased with his wife, Eliza Clark, six months earlier.

“I start digging, and I immediately found two bags,” he recalls. “There were all these little bones in the first bag. My first thought was, That’s got to be a cat. But the other bag was sealed. I could tell whatever was in there was intact.”

The first bag was a white kitchen trash bag with a loosely fastened cinch tie. The second bag was a grocery store plastic bag securely taped shut. He tore it open and was greeted by an intact, long-dead cat.

“The fur was slick…totally odorless,” he says. Whedon, who writes TV crime dramas (Halt and Catch Fire, Southland), is not the type who gets overly emotional over a couple of cat carcasses. “People bury pets in their yards,” he says. “It’s not that uncommon of a thing.”

But the discovery struck him as his first truly Instagram story-worthy event. He whipped out his iPhone and recorded a brief monologue and a photo of some of the cat bones.

He dug four more holes, and found four more bags. This called for a soundtrack. He chose Elton John’s “Circle of Life” from The Lion King to play over a shot of a pile of cat bones and then a budding lavender bush.

“That was already the best story I could ever have,” he says. ‘My friend found six cats in the backyard!’ ‘Six, oh my god!’

That night the couple had some people over.“How many cats do you think there could be?” his brother Jed asked.

Whedon guessed there might be as many as 20 cats buried in the backyard. Everyone laughed and laughed.

We tell ourselves stories about the homes we buy, especially the first homes we buy, in order to feel good about spending more money than we have ever spent on any one thing. Last October, when Whedon and Clark, a screenwriter and showrunner (Animal Kingdom), started looking for a new home for themselves and their two toddlers, they happened upon a listing for a traditional home with Art Deco details that promised a mix of domestic satisfaction and intangible grandeur.

“Once in a Blue Moon a special property comes on the market,” purred a listing last fall by NELA Homes. “Vintage appeal with the glamour of yesteryear.”

“The house leapt out as sort having a really homey feel and felt like a place we could stay as long as we wanted,” Whedon says.

The seller was a developer who had bought the property ten months prior and installed new floors, new roof, new electrical and new backyard landscaping. He was required to disclose that the previous owner, a woman, had died in the home. “My wife and I thought that was a good thing,” Whedon says. “Someone had lived a long time and had a good life and died here. That idea didn’t bother us at all.”

The deal was completed with lightning speed. Ten days later they were in contract. But soon after moving in, the Whedons began picking up clues that the former resident was a bit peculiar.

There were two cat doors in the front of the garage, for example, and the neighborhood cats were fond of using the structure as an outhouse. The concrete paths around the property were dotted with hundreds of tiny paw prints. And every evening a procession of tabbies kept lining up at the back door of the house, as if expecting dinner.

Soon the Whedons started hearing more about the home’s previous occupant. “The woman who lived there, they called her the Cat Lady,” a neighbor told Whedon. Another reported that animal control had been called in to investigate the situation. Their house, it seemed, was a local landmark of sorts. While inputting Whedon’s contact information at a local pet store, a clerk perked up at the record for Whedon’s address. “So, how is it in there?’” the salesman asked delicately. He told Whedon that after the old woman’s death teams of workmen descended on the house to relieve it of its contents, which they hauled away in a procession of dumpsters. “That was the first clue that the woman who lived there had been a hoarder,” Whedon says. He’d seen a few episodes of the A&E reality show Hoarders and spoke to a friend whose aunt suffered from a similar affliction. Object hoarding and animal hoarding often go hand in hand. “By all indications, the woman was very sweet and lovely, and really I think loved cats, but, you know, clearly had a problem,” Whedon says.

According to a report published by the Anxiety and Depression Association of America by Karen L. Cassiday, PhD, 3,500 animal hoarders come to the attention of authorities every year, 80 percent of animal hoarders have diseased, dying, or dead animals on the premises, and up to 40 percent of object hoarders are also animal hoarders. “Everyone suffers with animal hoarding—the animals, the hoarder, and those who love the hoarder.”

A week after the first grisly discovery, Whedon was back in the garden. He had lined up his friend Max Osinski, an actor who appeared in Agents of S.H.I.E.L.D., which Zack’s brothers Joss and Jed created, to come by around noon. Whedon cleared the gravel of the would-be garden bed and started digging. Even before Max’s arrival, he’d unearthed another 13 cat carcasses. On Instagram, where his adventures had attracted a rapt audience, Zack had to keep updating the tally, adding a soundtrack to lighten the mood: “Sixteen Going on Seventeen” from The Sound of Music, Steely Dan’s “Hey Nineteen”—you get the idea.

By the time Osinski arrived, Whedon had unearthed 27 cats. By day’s end, the death count had risen to 45. Eliza’s mom, who was glued to Instagram watching Whedon’s grim progress, DM’ed him to say he had to excavate under the plants in the garden as well. A day later he removed the plants, tilled every inch of the plant bed, and unearthed seven more bags. Cat count: 52.

He was left with a haunting thought: “Once you become attuned to where cats can be buried, I realized the area where I was digging was only the second best place to bury a cat on our property,” Whedon said.

To finish up the job, Whedon announced an upcoming digging party on Instagram for the following Sunday. Brother Jed, brother-in-law Spencer Treat Clark, and Osinski showed up at around 10 a.m. and spent six hours—with breaks for mimosas and pizza—digging up the area on the side of the house. Before the day was over they had unearthed another 18 cats—70 in toto.

“People had suggested we make an offering to the cats or the land,” Whedon says. He bought some candles and crystals at House of Intuition, and made a little offering. The land has been cleansed of feline spirits. (But who or what will turn up on this first post-cleansing Dia De Los Muertos?) Gus, the family’s Golden Retriever scared off the dinner crowd.

At a dinner party, someone brought over a cat ouija board. Another visit yielded a statue of a white cat with angel wings, which now resides in the garden beside a healthy looking lavender shrub. “I have a feeling this is a tradition that will continue,” Whedon says, adding that if he had known dozens of cats were buried in the backyard, he probably would have lowered his initial offer on the house.

Still, the house was built in 1938 and any house that old is necessarily filled with a certain amount of mystery. For Whedon, piecing together the story of when some addition was put on or when a wall was knocked down is part of the fun. There are things that can’t be explained.

“I like that the house has a story,” he says. “But I think you’d be hard pressed to find someone who sees having 70 dead cats in the yard as an incentive, and if you do that person should be arrested.”

It is true that in digging those 70 mini-graves in her backyard Cat Lady was in serial violation of the Los Angeles Municipal Code, which, as of 1964, requires all animals and fowl to be put to rest in an “established cemetery.”

Like the vast majority of non-horse-owning L.A. County residents over the last 55 years, she no doubt was unaware of a provision in the law that required her to call up the Board of Public Works, at the refuse station maintained by said board, and alert them to the presence of “a dead animal or fowl and the address where the carcass thereof may be found.” A receptionist at the L.A. County Department of Public Works advised that animal control “will come pick up any dead animal you might have.”

I spoke to several L.A. attorneys who said that a claim could probably be made if a new homeowner were able to show that the seller was aware of an illicit pet cemetery in the backyard and failed to disclose it. The Whedon-Clarks are not looking for retribution.

“The narrative here has some darker aspects,” Whedon says. “But we’re filling the house with all sorts of good vibes—babies and dance parties.”

RELATED: The Locations of L.A.’s 100 Most Memorable Crimes by Neighborhood