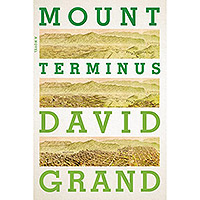 Grand took nearly 11 years to finish Mount Terminus, his third novel, about a young man coming of age in late-19th-century L.A. “I wanted to write about a boy who lives in a world of silence that coincided with the advent of silent film. There was nothing out there…then things changed so rapidly in the 1880s.” Despite Grand’s extensive research, his L.A. history is mostly made up. “I grew up in L.A. A lot of the book manifests from my childhood imagination, from taking walks in the Santa Monica Mountains. Although this is an invented history—I don’t think I use the words ‘Los Angeles’—you can recognize it.” The Brooklyn-based writer may be the biggest L.A. booster on the East Coast. “I tell people who don’t like L.A: ‘Just give me a day. I’ll take you to neighborhoods, and you’ll feel like you’ve traveled around the world.’ I always have converts after that.”