Home Uncategorized Damn the Man? Save the Tower? 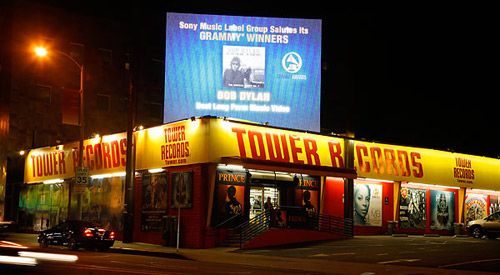 Chicago developer Sol Barket is planning to raze Live On Sunset, which was formerly the world-famous Sunset Blvd. Tower Records store, to build a five-story office and retail space, with demolition slated for January 2011.

Now Barket’s project, which will reportedly employ electronic billboards and include a David Barton gym, has preservationists like local resident Jerome Clearyhopes (who believes that there is still time to save Tower Records and transform it into a Sunset Strip Museum honoring music talent) in a tizzy.

The city of West Hollywood is taking comments, but they must be sent no later than TODAY and must respond only to issues pertaining to the draft-environmental impact report-8801 Sunset Boulevard, which can be viewed here. Comments can be emailed to Adrian Gallo at [email protected] or mailed to: Planning Dept., Adrian Gallo/John Keho, 8300 Santa Monica Blvd., West Hollywood CA 90069.

What do you think? Should residents rally to Save Tower Records? Or did the time for saving the famous store pass when Live On Sunset opened?