» Billie Eilish looks set to close documentary deal with Apple TV+ worth a cool $25 million. The doc has already been completed (it only cost $1 to $2 million to make) and will likely hit the streaming service in 2020. [Hollywood Reporter]

» A poll of likely Democratic primary voters revealed that nearly half agree that climate change is the issue they’d most like to see a president tackle. [Los Angeles Times]

» A just-released report from Uber reveals 5,981 incidents of sexual assault occurred under the company’s watch between 2017 and 2018. There were also 19 deaths reported.  [CNN]

» In an attempt to clean up local politics, Los Angeles has become the first city in the U.S. to specifically limit the campaign contributions of real estate developers. The companies and their execs will be banned from donating after 2022.  [The Real Deal]

» The federal government is suing LADWP for $40 million in connection with the 2017 Creek Fire. Utility equipment has been implicated in sparking the fire in some reports, though LADWP disputes that finding. [Los Angeles Times]

» Hoping to find a date with someone who shares your political views? Elizabeth Warren is the most-cited candidate in Tinder bios, according to a new study.  [Business Insider]

» Westwood Is the Most Expensive Neighborhood Outside Manhattan It ranks fourth in the country for average monthly rent. The entire country.

» Caitlyn Jenner Once Forbade the Kardashian Kids from Uttering O.J. Simpson’s Name The reality star opens up about her reaction in the wake of the Trial of the Century

» L.A.’s Cannabis Cafe Is Rebranding and Parting Ways with Lowell Herb Co. The West Hollywood cafe will now stock a variety of brands while Lowell launches a new venture in Nevada 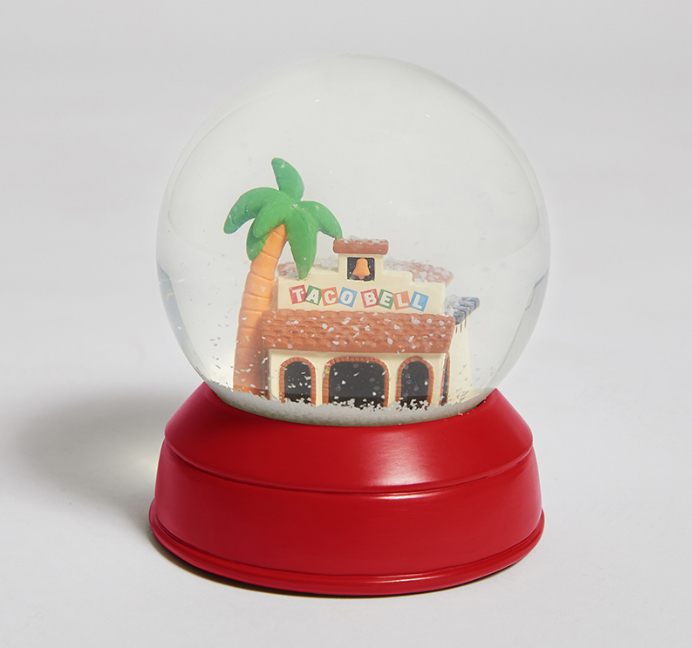 Four years after the world’s first Taco Bell was rolled away from its original home in Downey, the fast food giant has released an adorable snow globe showcasing store Numero Uno siting under a big cartoony palm tree and enjoying a “glittering snowfall.”

The original full-sized mission-style birthplace of Taco Bell was moved more than 40 miles to corporate headquarters in Irvine in a slow-motion overnight adventure back in 2015 when the original site on Firestone Boulevard in Downey was cleared for development. The vintage store is still shrink-wrapped in the parking lot, but now you can have this 9” limited-edition home version in a “giftable box” for only $30. Display it on your mantle while you dream of Christmas Chalupas under the tree.