» Fentanyl’s Scourge Plainly Visible On Streets Of Los Angeles Fentanyl is taking a toll on the growing number of people living on the streets of Los Angeles. Nearly 2,000 homeless people died in the city from April 2020 to March 2021, a 56% increase from the previous year, according to a report released by the L.A. County Department of Public Health. Drug overdose was the leading cause of death, killing more than 700. Fentanyl was developed to treat intense pain from ailments like cancer. The use of fentanyl, a powerful synthetic opioid that is cheap to produce and is often sold as is or laced with other drugs, has exploded. Because it’s 50 times more potent than heroin, even a small dose can be fatal. The federal government says the highly addictive and lethal synthetic drug has quickly become the deadliest in the nation. [AP]

» Cool Temperatures In SoCal Could Give Way To “Potent Storm” A cool air mass moving through the Southland this week is expected to deliver gusty winds, subfreezing temperatures and a potentially significant storm system by the end of the week, according to the National Weather Service. Temperatures on Monday dropped about 10 to 15 degrees from Sunday. Wednesday morning is expected to be the coldest point of the week when the L.A.-metro area is slated to see low temperatures in the 40s. The Santa Clarita Valley and far western San Fernando Valley could drop into the 30s, while the Antelope Valley could see temperatures in the 20s. [L.A. Times]

» Ex-warden At California prison Faces Trial Over Inmate Abuse Allegations The former warden of an abuse-plagued federal women’s prison dubbed the “rape club” went on trial Monday, accused of molesting inmates and forcing them to pose naked in their cells. Ray J. Garcia, who retired after the FBI found nude photos of inmates on his government-issued phone last year, is among five workers charged with abusing inmates at the federal correctional institution in Dublin, California, and the first to go to trial. Opening statements kicked off Monday in federal court in Oakland. Prosecutors presented evidence they claim will show that Garcia’s abuse of several inmates followed a pattern, starting with compliments, flattery and promises of transfers to lower security prisons and escalated to sexual encounters. Garcia, 55, has pleaded not guilty. If convicted, he would face up to 15 years in prison. [AP]

» California Will Soon Have the Nation’s Most Expansive Record-Clearing Law California lawmakers approved one of the most far-reaching criminal justice reform measures in the nation this year, a bill that drew relatively little fanfare among a parade of high-profile legislation. The new law makes California the first state that will automatically seal most criminal records for those who complete their sentences. Advocates pushed for the change because they said such records can prevent once-incarcerated people from getting jobs, housing, and schooling. Jeff Selbin, the director of the Policy Advocacy Clinic at the U.C. Berkeley School of Law, called the legislation “the most expansive and comprehensive record-clearing law of its kind in the country.” [NY Times]

» Everything Everywhere All at Once Tops Gotham Awards Everything Everywhere which went into Sunday night up for three awards, was named best feature during the event Monday at Cipriani Wall Street in New York. Actor Ke Huy Quan also won best supporting performance for his work in the film—since last year, the Gotham Awards has recognized performers in gender-neutral categories. Tár went into Monday night with a leading five nominations, followed by Aftersun with four nominations. The Inspection and Women Talking each scored three nominations. [THR]

» U.S. Ponies Up $1B to Keep California’s Last Nuclear Plant Humming The Diablo Canyon Power Plant was scheduled to close in 2025, but federal backing will now prolong its (half) life indefinitely

» Newsom Swears He Won’t Run for Prez, No Matter What Joe Biden Does One of the few Democrats with anything going for him nationally, CA Gov. Gavin Newsom still will not cop to nursing presidential ambitions
» Iran Demands U.S. Ousted from World Cup After Flag-Switch Hilarity The U.S. Soccer Federation changed the Iranian flag on social media to show solidarity with protestors in the country
» Balenciaga Says Sorry for Those Children with Bondage Bears in New Ads Meanwhile, Balenciaga ally Kim Kardashian is ”currently re-evaluating” their relationship following the S&M tot photo spread
» Bob Dylan Has Auto-Signed Art for Years—Massive Refunds Are Now Due In a rare public statement, Bob Dylan said he regrets using an auto-pen to sign books and artwork, adding, blame COVID 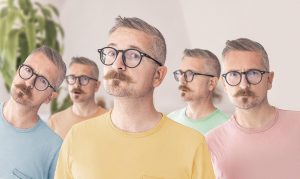 When Snoop Dogg’s assistant slid into Peter Quinn’s DMs, informing him that the legendary rapper and cannabis god was a fan of Quinn’s work and wanted to chat about collaborating on a video, Quinn thought it must be a mistake.

For the Ireland-born, Los Angeles-based VFX expert who has seemingly cracked the code on capturing the internet’s attention with his short surreal videos, to have caught Snoop Dogg’s eye was too puzzling to believe. With a background in advertising, Quinn’s VFX work had been something of a pandemic hobby: he was making short, pithy, clips of him crushing himself, shooting a tiny version of himself through a basketball hoop, multiplying himself before the camera’s gaze, a dozen tiny Peter Quinns zigzagging across the screen. The videos were whimsical and striking and absurdly realistic. But were they also more? “Is this real?” Quinn finally DM’d Snoop himself. It was. Snoop wanted to meet.