» L.A. Unified School District Cyberattackers Demand Ransom Just as the air of apprehension was lifting from the campuses of L.A. Unified, the hackers behind a cyberattack on the nation’s second-largest school district, which occurred two weeks ago, have resurfaced. District officials confirmed Tuesday that the hackers made a ransom demand, claiming to be in possession of sensitive data. According to LAUSD Superintendent Alberto Carvalho, “There has been no response to the demand.” The district has declined to disclose the amount of the ransom demand or any further information about what “sensitive data,” if any, the attackers may be holding. [LA Times]

» L.A. Approves Contract With The Goal of Creating New Transit Shelters The Los Angeles City Council approved a contract for the city’s Street Transit Amenities Program Tuesday that aims to install 3,000 transit-stop shelters and 450 additional shade structures across the city. Currently, of the 1,884 transit shelters in L.A., one-third are over 30 years old, half are over 20 years old and 96 percent are over a decade old. The council also pointed out that the lack of adequate transit shelters in the city disproportionately affects lower-income people—the median income of Metro riders is $19,000, and 84 percent of Metro riders don’t own a car.[NBC]

» New Microprotein Linked To Alzheimer’s Risk Discovered During USC Study Scientists could be one step closer to curing the debilitating neurological disease after discovering a mutation in a microprotein called SHMOOSE. The easily overlooked protein is encoded by a newly discovered gene within the cell’s energy-producing mitochondria and is associated with a 30% higher risk for Alzheimer’s. The discovery presents the potential for the development of a new kind of treatment, which targets particular genes. According to the study, nearly a quarter of people of European ancestry possess the mutated version of the protein. [CBS]

» Finding Community And ‘Sunday Church’ At Black Market Flea Mayah Hatcher, who had recently moved to L.A. from Pheonix, felt “ostracized” and “tokenized” as one of the few Black vendors at local flea markets. So in 2021, she decided to create her own space for Black businesses, creatives and other community members. Black Market Flea is a monthly outdoor bazaar that looks more like an Afro-futuristic retro day party— and it’s all going down this Saturday, September 24 at the Beehive in L.A. [LAist]

» Graffiti Art Gets a Permanent Home in L.A. With the Opening of Beyond the Streets Gallery Roger Gastman, the noted graffiti historian and street art collector, is opening a permanent Los Angeles home for Beyond the Streets, his popular series of museum-scale exhibitions, celebrating street artists past and present. Launching on September 24 with “Post Graffiti,” an exhibition tracking the evolution of street art, the gallery will offer a mix of museum-style shows with loans from private collections. “It’s writing on the walls, it’s writing on the trains, it’s writing on the rooftops. And it’s illegal. Sometimes it looks like vandalism, sometimes it looks beautiful,” Gastman said of graffiti art. [ArtNet]

» Parents Sue USC After Son Dies on Student Film Set The parents of a Chapman University student are accusing USC and two students of negligence after the on-set death of their son
» LAUSD Lifts Journalism Teacher’s Suspension at Daniel Pearl High
Adriana Chavira tells LAMag that while she celebrates the decision, she is still facing unanswered questions
» The 6 Best Vegan Fast Food Restaurants In L.A. In terms of meat-free grub, L.A. has figured out how to satisfy everyone from the five-star foodie to the low-maintenance road-tripper
» Book Bans Surge as Advocacy Groups Wage War on Literature
Over 2500 book bans occurred in the last school year along with a growing number of legislative attempts to limit school material
» James Bond Producers Seeking New 007 Who’s Willing to Commit
The stewards of the 60-year-old action franchise want a Bond who won’t run out on them for the next hot picture to come along
» FBI Agent’s Corruption Trial Becomes Thorny Reunion as “Lawyer” Testifies Babak Broumand, on trial facing allegations related to moonlighting as protection for the Los Angeles Armenian Mafia, saw Edgar Sargsyan for the first time in four years 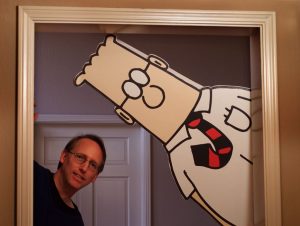 Dilbert Stripped! The Cubicle Comic’s Been Nixed From 77 Newspapers

“Dilbert,” the long-running comic strip about the travails and absurdities of office life, has been given the pink slip at 77 newspapers nationwide, its author told Fox News. Lee Enterprise, a media company that owns almost 100 newspapers, stopped printing the comic this week, said “Dilbert” writer and illustrator Scott Adams, who created the comic in 1989.

Adams said that he was aware that Lee was doing a “larger overhaul” of their comics, but he didn’t know why his in particular was shed. “Why they decided what was in and what was out, that’s not known to anybody except them, I guess,” he told Fox.

Adams noted that in recent years he’s sometimes poked fun at woke issues like ESG (Environmental, Social, and Governance) into his comic. ESG, which has taken a particularly strong hold in finance, has found itself in the crosshairs of the culture wars for incorporating its tenets into, for example, corporate and investment decision-making, among other things.