» Mexican Faith Leader Jailed For Sex Abuse; Flock Stays Loyal Naasón Joaquín García addressed the ever-loyal followers of La Luz del Mundo Church via telephone from his Los Angeles prison—where he is serving a 16-year sentence for sexually abusing five women in his congregation. “I do not see the bars that separate me from you,” he told members of his congregation. “I see your beautiful faces … because you are the children of God.” Thankfully, whether García can see them or not, those bars are, in fact, there, and they’re going to be there for quite some time. [AP]

» Affordable Rental Housing Development Breaks Ground In South Los Angeles An affordable housing project planned for decades finally broke ground Monday in South Los Angeles. A mixed-use, 50-unit affordable rental housing development called Serenity will be built on the Southside Church of Christ’s former parking lot on Manchester Avenue. The five-story development will include units for the homeless and seniors. The Los Angeles City Department of Housing pitched in more than $9 million to the project, along with nearly $20 million in tax exempt and taxable bonds. [CBS]

» The War Against Southern California’s Urban Coyotes. ‘Horrific’ Or Misunderstood? A contentious debate about whether to live or let die is pitting cat owners against conservationists. The urban coyote populations in L.A. and other metropolitan areas across the country can pose a major threat to household pets and humans alike. Still, some groups, such as Project Coyote, argue that peaceful coexistence with our canine neighbors can be reached. However, Torrance City Councilman Aurelio Mattucci disagrees, helped shepherd through a measure making his city one of the few in California committed to year-round trapping, which results in the killing of about one coyote a week via lethal injection. [LA Times]

» UCLA Study Finds Teens Resoundingly Reject Aspirational Content In TV & Movies  A recent study conducted by The Center for Scholars & Storytellers at UCLA found that Gen Zers don’t care about the lavish lifestyles, romanticized in shows like Gossip Girl. Only 4.4% of the teens surveyed, aged 13-18, wanted to see content focused on being rich, successful or famous. On the other hand, 21% said they wanted to watch content that grapples with real-world issues, such as family dynamics or social justice. “Hollywood has built its Young Adult content on the belief that teens want to see glamorous lifestyles and rich & famous characters, but our research suggests the opposite is true,” said psychologist Yalda Uhls.[DEADLINE]

» Dodgers’ Base Stealing Legend Maury Wills Dies At 89 Always a threat on the base paths, Maury Wills led the National League in stolen bases from 1960-1965 and was part of three World Series teams. With a batting average of .281, 2,134 hits and 586 stolen bases in 1,942 games during an illustrious 14-year career, Wills retired in 1972 as one of the Dodgers’ all-time greats. Wills earned the National League MVP in 1962, was named seven times in the All-Star team, and won the Gold Glove Award in both 1961 and 1962. [NBC]

» Brad Pitt And Nick Cave Make A Surprise Art Debut In Finland Hollywood’s Brad Pitt and Australian legendary songwriter Nick Cave have conjoined their artistic talents in an exhibition in Finland that displays sculptures and ceramics made by the movie star and the musician. The Sara Hilden Art Museum, located in the southern Finnish city of Tampere, was initially scheduled to exhibit solely the wide variety of works by British artist Thomas Houseago—a well-known sculptor—but he reportedly persuaded the museum to include works by his good friends Pitt and Cave. [NPR]

» FBI Agent’s Corruption Trial: Dirty Money, Mobsters, and Schwarzenegger Appear in Filing ”I’m a dead man,” the government’s star witness, a phony Rodeo Drive lawyer, told colleagues before making his deal with the FBI
» Judge Frees Accused Murderer and ‘Serial’ Podcast Subject Adnan Syed
Adnan Syed, subject of the popular “Serial” podcast is free for now after 23 years behind bars for allegedly strangling his girlfriend
» The Kawaller Report: Schmoozing with Hollywood’s Haute Elite
Reporter Ben Kawaller went to the one-year anniversary of a swanky Hollywood bar to talk to people who are cooler than him—or are they?
» The L.A. Times Food Bowl is Bringing the City’s Best Cuisine to One Place The three-day extravaganza featuring food and drink comes to the Paramount Studios Backlot Lot this weekend
» Lita Albuquerque’s “Liquid Light” Lands in L.A. After a devastating fire, multimedia artist Lita Albuquerque and her daughter, Jasmine, made a film about a future female astronaut’s rise from the ashes
» California Native Americans Face Off Against Online Gambling Giants Native American tribes are fighting online sports betting companies in a winner-take-all fight for gaming rights this November 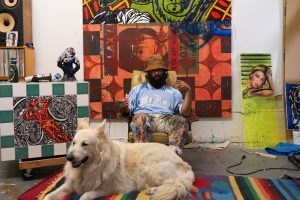 On a breezy February evening in 2022, a who’s who of local and international curators, collectors, and artists crammed into a tiny gallery called One Trick Pony in Little Ethiopia, iPhones recording every skronk of the saxophone played by the bombastic, bearded L.A. artist Alex Becerra. Dressed in a ten-gallon hat and an oversize trench, the 33-year-old bleated improvisational notes while shuffling around a foam sculpture of a 1977 Mercedes-Benz 300SEL called Garage Fanfare, adorned with acid-hued Plexiglas windows covering oil paintings of rims or kitschy landscapes, sculptural self-portraits, and empty beer bottles.

“It’s the main brain of the studio,” says Becerra of the sculpture during a late July visit to his Inglewood studio where he’s preparing for his September 24 solo debut with VSF.

Becerra’s densely layered, maximalist oil paintings and drawings of himself, his family, his jazz icons, and his sexual fantasies have earned him magazine covers and solo shows from Chicago to Berlin.