Home Uncategorized Vegetable-Centric Cooking Is Taking off, and It Has Little to Do with... 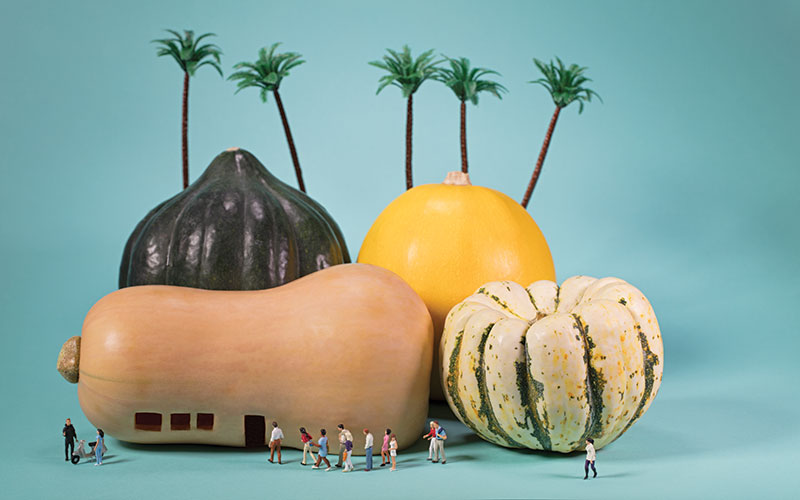 Not far from the offices of director Alejandro Iñárritu and Beats by Dre, Jordan Kahn’s restaurant, Destroyer, draws a busy lunchtime crowd. Cash? It’s not accepted here, a place where even a chalkboard menu would be too 2015. Instead rotating dish choices are projected on a wall, showcasing vegetable-centric cooking without being, you know, vegetarian about it. Sure, there’s meat—say, a salad with chicken confit and hazelnuts. But the majority of options just happen to revolve around plants. Roasted baby tomatoes burst over almond curds in one bowl; another holds a mound of caramelized fruit and almonds that looks like bananas Foster without the ice cream (or is it a deconstructed Kind bar?), at least until the ribbon of silky parsnip soup is poured around it. This is not the perfunctory bowl of quinoa you might expect to fuel a creative afternoon.

Over in Koreatown, Gary Menes has been placing the same casual emphasis on veggies at Le Comptoir, tweezing calamansi segments onto precisely composed tasting menu dishes plated before rapt customers at the ten-seat counter. At Erven in Santa Monica, Nick Erven, who occasionally filled empanadas with molten marrow at St. Martha, has gone plant based in a former Real Food Daily space. Cooked  as a loaf, his onion bread pudding is enriched with pureed tofu for creaminess before being seared until it’s crisp around the edges like a good french toast. “Plenty of my dishes used to be barely left of vegan,” says the Wyoming-raised ex-musician, who mentions the yeast broth that he spikes with pickling juice and employs as a funky backdrop for green onion spaghetti. “I just went with it.”

If the chefs are communicating a message other than that they are interested in a broad range of tastes and techniques, they’re not being obvious about it; there’s no manifesto about whether they think plant-based cooking is more environmentally friendly than cooking meat. They avoid using the word fresh now that it’s become a mass-market descriptor, and there’s hardly a line on the menu about local sourcing; it’s all so matter-of-fact, you assume restaurants are in the habit of placing tubers and pulses front and center, not as a (forgive me) bone being thrown to vegetarians but as a satisfying alternative for meat eaters, too.

California chefs have focused on veggies for ages, albeit in a different way. While Topanga’s Inn of the Seventh Ray was still in its youth in the  late 1970s, cooking vegetarian fare for Age of Aquarius refugees, Michael’s in Santa Monica was welding button-size squash and pristine mâche to the principles of nouvelle cuisine. An entire school of produce-driven cooking evolved, leading us to a time when it’s impossible to read some menus without having a detailed list of the farms that have provided everything from the peppery arugula to the tomahawk chop. So consider restaurants like Destroyer a natural extension.

Adding resonance, though, is the sense that for many chefs, this is not a trend but a destination. The trail of Japanese clarity Josef Centeno has been following for several years in downtown restaurants reaches a high point in the salt-baked baby turnip gleaming beneath a shiso chimichurri at his new P.Y.T. Recently installed at Michael’s, 28-year-old Miles Thompson walks a culinary path cobbled with onions, Jerusalem artichokes, and potatoes. He’s been preparing fingerlings a la plancha with furikake aioli since his days at Allumette in Echo Park. But the one-two punch of sea and earth brings the cooking full circle in the storied garden setting of Michael’s.