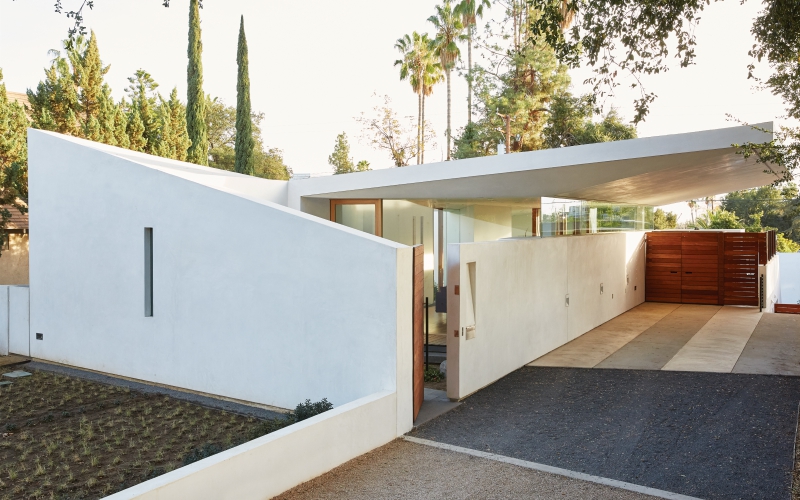 One of the first things that Elisa and Eric Callow did upon buying a traditional saltbox-style house in Altadena was to consult with a local expert: They knew the house had structural problems, but if it had any historical significance, they wouldn’t move forward with plans to replace it with a contemporary structure.

Once they were assured the older neighborhood wouldn’t be losing a landmark, they met with longtime L.A. architect Rick Corsini and outlined their desires: They wanted visitors to enter through a walled courtyard and the door placed to the side of a window into the main room. They asked for nontraditional materials, which ended up being basalt stone and cumaru wood. Walls that accentuated their large art collection were a must.

Elisa had been introduced to contemporary art as a child (her mother was an artist), and her passion for it ran deep. Since serving as the founding director of the Armory Center for the Arts in Pasadena in the early 1980s, she has worked as a strategic planning consultant for a number of cultural institutions ranging from the San Francisco Symphony to L.A.’s Natural History Museum.

Elisa has a history with local architecture as well: She grew up in a Gregory Ain complex in Silver Lake, which left a lasting impression. As a single parent, she raised her daughter in a vintage Spanish Colonial Revival home in Pasadena that included a Batchelder fireplace. After she and Eric got engaged, they purchased the Lloyd Wright-designed Gainsburg House in La Cañada Flintridge for their blended family, hiring Corsini for the restoration.

“This was my first from-the-ground-up house,” says Corsini of the Altadena project, the construction of which began in 2015 and took almost two years. To create seclusion, he erected a long wall on one side while opening up views of the tree canopy at the back of the property, which slopes down a hill. Instead of a traditional garage, he designed a carport with a ceiling more than 13 feet high and a cantilevered roof, lending the building a sense of flight. Inside, the open-plan living/ dining room flows to an outdoor entertaining area. The adjacent kitchen has windows in place of upper cabinets, with plates and glasses stored in drawers below the counters. The house then descends to a den, the sole two-story room, with dramatic six-foot-high windows that frame the ever-changing cloudscape. “The Callows were clear from the get-go that they didn’t want to overwhelm the neighborhood,” says Corsini. “They wanted a house that was modest in scale, and the slope let us add a second story without changing the one-story profile from the street.”

Elisa sees the finished product as a contribution to a legacy of progressive design in Los Angeles. “We wanted to do something unusual but beautiful,” she says. “The house is a different sort of art form. There’s a need for practicality, but it also functions as a lived-in sculpture.”

RELATED: An Early Look at the Aquarium of the Pacific’s Bold, Beautiful Expansion