Home Uncategorized Correspondences From a Jewish Grandmother: How to Handle Summer in L.A. 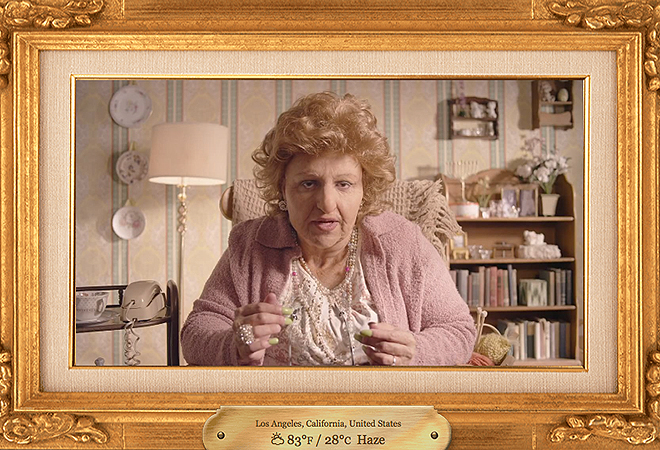 Summer has officially arrived in Los Angeles, and like our dire traffic situation, the weather is a topic of conversation that we seldom tire of discussing (Too hot! Too cold! Too smoggy!). We aren’t the only ones.

Donning prosthetics, a wig, and Key lime-green press-on fingernails, comedian David Krumholtz has taken on the persona of a Jewish grandmother named Gigi who lives in Boca Raton and has a penchant for meteorology. Krumholtz—er, Gigi—is the star of Weather From, a comedy Web site that delivers local forecasts via 35 pre-taped segments that play based on the weather in a particular region. Watch one and you’ll realize that Gigi is quite the personality. We were certain she’d have opinions about the climate in L.A. Below, find her tips for handling summer in the city.

I know you live in Boca. It’s probably a little warmer there, but the average temperatures in L.A. in June, July, and August are in the 70s and 80s, and we have 329 days of sunshine every year. What would you suggest men and women wear in that kind of weather?
I’ll be honest with you. I see now that men are wearing more and more tank tops. And you know what? I don’t like that. Men have way too much armpit hair. That’s not something I want to see. If you’re going to wear a tank top, please, use a clipper or something. Trim it down. They make women shave it.

Also, I go without underwear almost 90 percent of the time. Underwear bunches up and it gets inside your vagina, gets very sweaty, and then there’s a rash and infections and what have you. I’ve had it all, believe me. This thing has been through hell and back. But let me tell you something. Between you and me, sweetheart, it is still tight as a rope, ok? That’s not for print. Well, you can print it. That’s fine.

Let’s talk a little bit about climate change. That’s a big topic here in L.A.
It makes life interesting. Everybody sees it as a negative. I see it as a positive. It’s nice to have a couple more months of summer or a couple less months of winter. As long as you have your skin protection, you know, your sunscreen, you’re good. My older sister, her name is Ciel—you know Seal like the singer? Seal like the animal? Her name is Ciel, except spelled C-I-E-L. And Ciel had a very carefree attitude about going out in the sun. One day she got a melanoma right in the middle of her forehead. It looked like a third eye. It’s embarrassing to be seen in public with her now. But she’s still alive and kicking. She lives in a small nursing home where she’s taken care of by a west Ghanaian woman named Radika. If you need that spelling, it’s R-A-D-I-K-A. What kind of name is that? Sounds like a Ghanaian one to me. Another thing that we Angelenos buy into is this idea of earthquake weather. Have you heard of this?
No. I’ve always wanted to be in an earthquake, though. I’ve just always wanted to get shaken up, you know what I mean? It’s like living in a blender.

Well we’ve been having a lot of them lately. And supposedly they happen when the weather is hot and dry. It’s a theory that dates back to ancient Greece. Do you think the Greeks got that right?
I don’t know if the Greeks got that right. But I’ll tell you one thing: I love that halloumi cheese. I could eat halloumi cheese all day long. I’ll schmear it on fruit. I put it on a prune cookie and it clears me right out. But you know, the Greeks, they’re very smart. So I have to trust that they’re probably right about this earthquake weather thing. But between you and me, all Greeks have a smell to them. I have a friend named Nikos. He was a tomato salesman. He smelled like—oh I don’t know, like Pantene Pro-V and scallions.

You know, I’m Greek, so now I’m going to go around wondering if I smell like scallions and Pantene.
You probably do, sweetheart.

All right, back to weather. I’m not sure how cold it gets in Boca, but L.A. summers hit lows in the 60s. And people here freak out about it and wear parkas. What would you say to those people?
Look, in Boca, people are on their deathbeds. You have the walking dead here. When it gets the slightest bit cold, it’s very important that they cover up because a chest cold can turn into six feet under. But in L.A., it’s all young people. What are they worried about?! Just go inside if you’re cold. Everybody’s in their car anyways. Move to Greenland, then you’ll freeze your balls off. Be brave. Stop being such wussies. That whole town is full of wussie men. Light in their loafers men. Effeminate heterosexuals. There’s not a real man in the whole town. I see the pictures of the hipsters. Look at Justin Bieber. He looks like my niece Marsha. They have a stunning resemblance.

How would you recommend an Angeleno combat shvitzing on the rare occasion that it gets humid?
Are you using a Jewish word on me? I’m proud of you. What’s that company that makes that good friction block? Gold Bond! I bathe in Gold Bond. Fill the whole tub with Gold Bond and sit in it for about 26 hours. Your skin will be milky smooth. And you know, it prevents stretch marks. The only downside is that you’ll be followed around by flies for the next five days.

Gold Bond, or you know, maybe use a rag. People don’t use handkerchiefs anymore. They’re not just for blowing your nose. You can wipe under your armpits, you can wipe in your groin area, you can wipe the top of the crack of your ass. A handkerchief has multi-uses.

Gross…
One person’s gross is another person’s perfect. Understand?

Sure thing. Ok last question: what’s the best type of weather for meeting a companion?
I like to meet when it’s about 72 degrees. You’re not going to be standing there shvitzing, men can smell you if you wear a nice perfume or a shea butter, and if it all works out, you go inside his or her house, you consummate the relationship, and you see where that takes you. You don’t even have to shower. Just swim in your own juices and go.

Is That Wildfire Smoke We’re Seeing in L.A. Today?