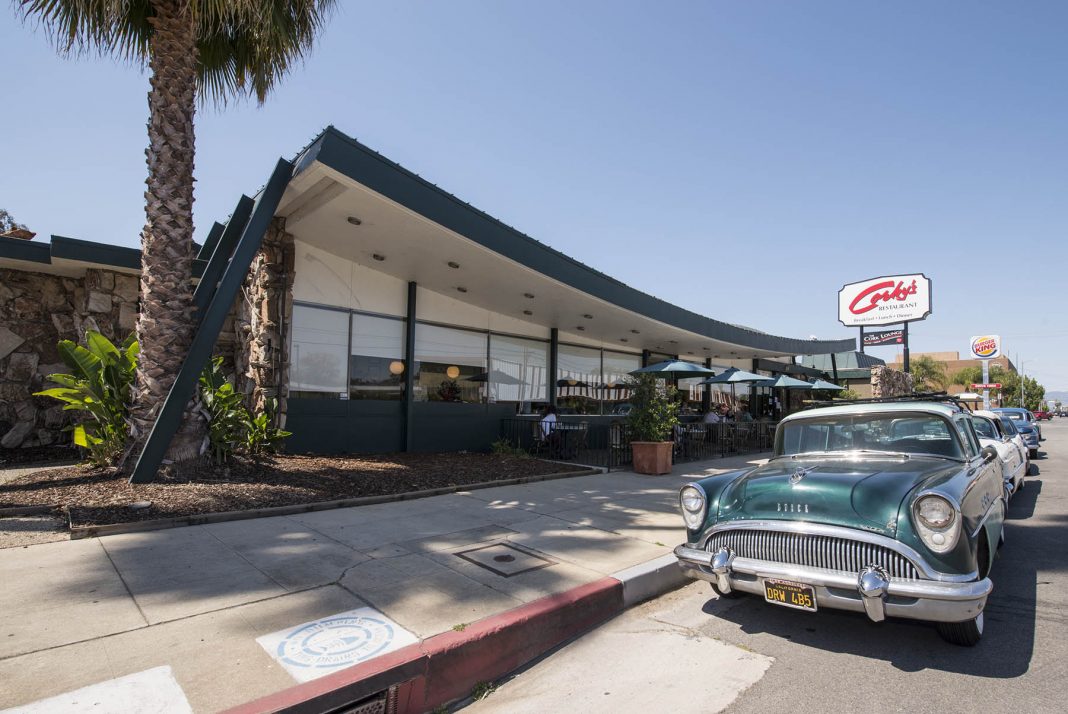 After more than six decades of serving up big breakfasts and hot hamburgers to San Fernando Valley families, the grills will go cold at Corky’s in Sherman Oaks this Sunday.  Even if you’ve never been inside of the distinctive restaurant with the upswept roof and protruding dogleg supports, you might recognize it as a popular filming location for commercials, TV, and movies like A Nightmare on Elm Street.

The Googie-style restaurant was designed by master architects Armet & Davis (who brought you Norms and Pann’s) and opened as Stanley Burke’s in 1958. In the 1950s, Burke owned the popular Stan’s Drive-In chain with neon and carhops at locations from Hollywood to Bakersfield. His upscale valley coffee shop soon added a cocktail lounge known for its live music (Billy Joel was once the piano man there) and banquet room that became a key gathering place for charities and civic activities in the new suburbs north of the Hollywood Freeway. Corky’s became a hub for the Van Nuys Boulevard cruising scene of the 1960s and ’70s.

Martin Cable, a manager for Burke, took over operations in 1964 and renamed the place Corky’s, after a family pet. Cable sold the restaurant to Peter Metsos in 1980 and it became The Lamplighter. Three generations of his family continued the tradition for almost 40 years, restoring the name and bringing back some of the original design features, until closing after a lease dispute that is bringing an end to this valley institution. “Landlords don’t want true American family dining restaurants where we witnessed customers get married have babies and then watch them grow thru their visits,” operator George Metsos said in a press release. “They feel we are outdated and old.”

Corky’s may be closing, but preservationists are working to secure the future of the 1958 building. Architectural historian Alan Hess, who literally wrote the book on Googie, has submitted a Historic-Cultural Monument application to the City of Los Angeles in a bid to preserve the structure, which is on land still in the family of the original owner. Other examples of Armet & Davis buildings have been landmarked at the state and local level, including the Wich Stand (now Simply Wholesome) in Ladera Heights, Norms La Cienega, and Johnie’s at Wilshire and Fairfax. Neighborhood groups have contacted Councilman David Ryu for support. City staff expect the nomination to come before the Cultural Heritage Commission early next year.

RELATED: After 70 Years, the Norms Chain of Iconic Googie Diners Looks to the Future