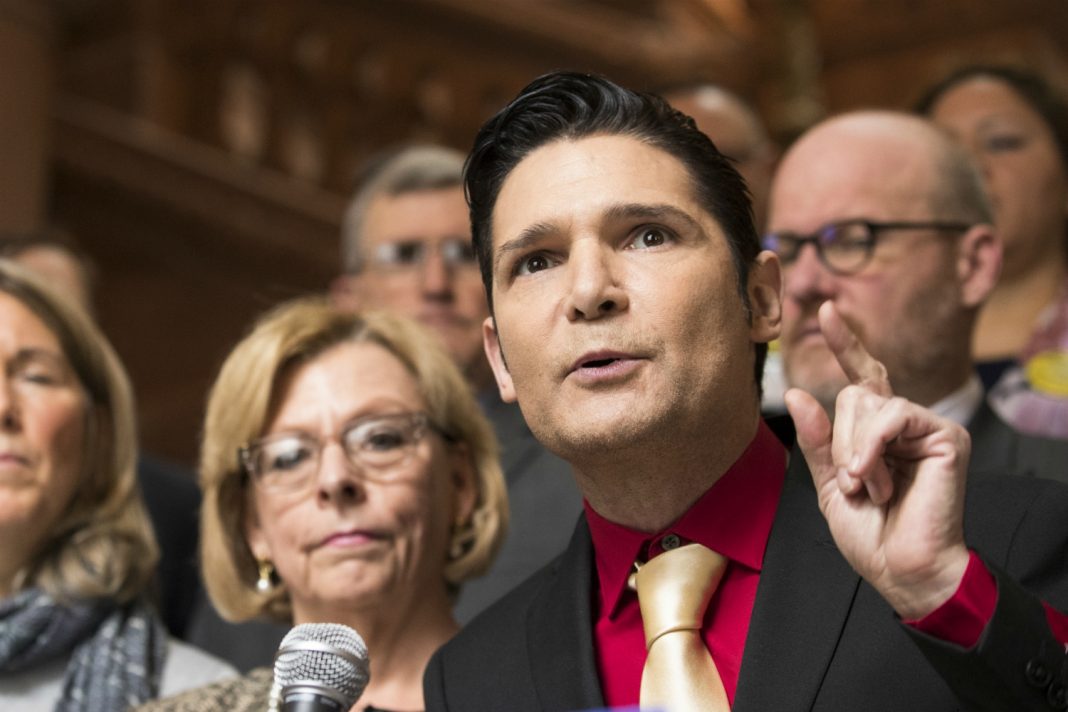 While the audience at the Director’s Guild of America waited for the screening of My Truth: The Rape of Two Coreys to begin, people who had paid $20 each to simultaneously stream the movie on Feldman’s website took to twitter to complain that all they were seeing was a black screen or a “404 Error” warning.

Feldman, who has for years said that his life has been threatened for speaking openly about the sexual abuse of children in Hollywood, told the audience that his website had been hacked.

Feldman then called his internet service provider on speakerphone for the audience to hear. “That’s what we’re seeing right now—we’re seeing an attack coming in,” said a man on the other end.

“We’ve been seeing it since the beginning of this,” a woman’s voice added. “And they’ve been clearing it and dealing with it, but they keep coming back.”

Today, Feldman is lashing out at critics who accused him of staging the whole thing as a PR stunt, as the internet viewers never got a movie for their money. Meanwhile, members of the live audience who did see the doc report that—despite Feldman’s promotional claims—the film merely repeated past accusations and offered no new revelations.

SPOILER ALERT* 4 ALL OF U WHO COULDNT C THE FILM LAST NIGHT, IM SHATTERED BEYOND COMPARE! SINCE THEY R TRYING 2 PAINT THIS BLATANT ATTACK ON MY 1ST AMMENDMENT RIGHTS 2 SPEAK FREELY AS A HOAX, PPL R WRITING WE NEVER SAID THE NAMES, HERES PROOF IT HAPPENED! https://t.co/9IBre5o0RO

In the film, Feldman claims that Charlie Sheen raped Corey Haim in 1986 when Sheen was 19 and Haim was 13. Feldman has made this accusation before, and Sheen has hotly denied it.

In a statement to the New York Post today, Sheen said, “These sick, twisted, and outlandish allegations never occurred. Period. I would urge everyone to consider the source and read what his mother Judy Haim has to say.”

“My son never mentioned Charlie. We never talked about Charlie. It was all made up,” Judy Haim told Entertainment Tonight in 2017. “If my son was here to hear all of this he would throw up.”

In the film, Feldman also repeats allegations of sexual abuse he made in 2017 against an former actor and personal assistant Jon Grissom, nightclub owner Alphy Hoffman, and onetime manager Marty Weiss. All three have denied the accusations.

At noon on Tuesday, Feldman announced via twitter that he would try to stream the film at 12:45 Los Angeles time. As of 12:50 there was no additional update.

UPDATE ON #MYTRUTHDOC WE HAVE NEEN SPEAKING W THE PLATFORM ALL DAY & THEY R GOING 2 ATTEMPT 2 GET THE SITE UP N RUNNING AMD STREAM THIS FOR THE 12 NOON SHOWING! SO IF U HAV TIX U MAY USE THEM IN 45 MIN 2 TRY N WATCH THE FILM, IF IT DOESNT WORK WE WILL GET THE FILM 2 U, LATER ON.

Scene It Before: “The License to Drive” DMV