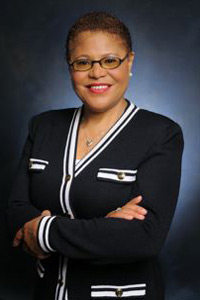 Earlier today, when Assembly Speaker Karen Bass announced that she is seeking Diane Watson’s congressional seat, it was abundantly clear she’d already won her predecessor’s blessing. Watson appeared alongside her, declaring that she was supporting Bass “maybe 300 percent.” With the state listing towards bankruptcy, Bass has been the most reluctant of butchers, trimming social programs only to see the governor take a meat-ax to them through use of his line-item veto. Now term-limited out of the Assembly, Bass, should she win, might find it refreshing to make law for a federal government whose prerogative it is to simply print more money when the existing reserves run out. As speaker, she had to play the role of a conciliator. If she succeeds Watson, Bass will be representing an area from Culver City to Ladera Heights to Los Feliz that went solidly for Obama, and succeeding a legislator branded the most liberal member of Congress of 2006 in the right-wing National Review. (Then Senator Obama took the prize the following year.)  To get a read on Bass as potential congressional timber, see her extensive Q&A in the magazine last October.