Home Politics You Need to Keep an Eye on These 5 SoCal Congressional Races... 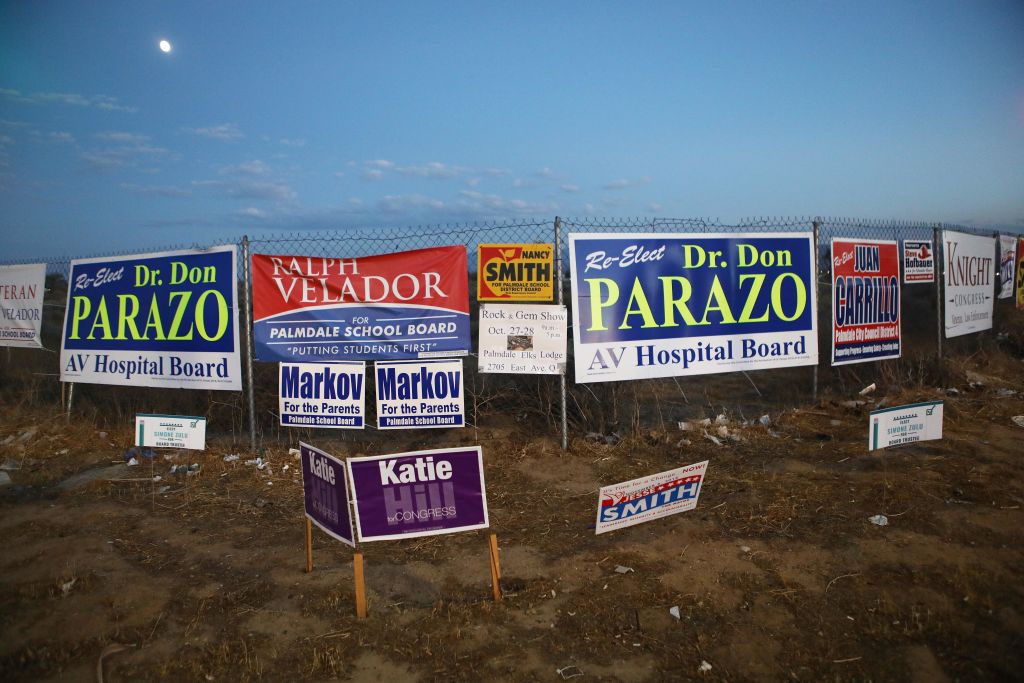 California has a reputation for being a pretty progressive place, but when you look district by district, there are plenty of red and purple areas, some of them not far beyond L.A.’s city limits. As we head into the midterm elections in November, several of those areas are locked in intense campaigns, where seats that were long considered comfortable Republican strongholds might be vulnerable to Democratic challengers.

Here are five congressional districts from L.A. to San Diego where 2018’s so-called “blue tide” might roll in. The challengers range from a Palestinian-Mexican-American former Obama staffer and a young woman with a background in homelessness issues to a moderate ex-Republican who could swing suburban voters turned off by a Trump-associated conservative. Each of them is a race to watch.

Hillary Clinton carried the CA-25 in 2016, but not by much. On that same ballot, former police officer and member of a group known as Community Resources Against Street Hoodlums, Republican Steve Knight picked up a second term with 53.1 percent of the vote. Now he’s running in what’s considered one of the tightest races of the year against Democratic challenger Katie Hill. Hill has been getting a lot of national media attention as part of a wave of younger, female, first-time candidates throwing their hats in the ring in 2018.

Hill has the backing of EMILY’s List, NARAL, and other major left-leaning political organizations, which has helped with fundraising and establishing herself with the public. At 30, this is her first political campaign, but she has been involved with ballot referenda campaigns in recent years, particularly around housing and homelessness issues. She has also served as the executive director of the nonprofit People Assisting the Homeless, known as PATH. On her website, core campaign issues include law enforcement policies that recognize systemic causes of crime, addressing income inequality, and ensuring reproductive rights.

Republican Congressman Darrell Issa announced back in January that he would be retiring at the end of his ninth term, creating an open seat and prime conditions for party-flipping. With an open seat like this, California’s unusual open primary system might give us a decent look at what to expect on general election day—50.84 percent of votes in the traditionally red district were cast for Democratic candidates, compared to only 47.86 percent for Republicans. Even Issa, with all the advantages of incumbency and a presidential-year ballot, only won his last election by 1,600 votes. State Board of Equalization member Diane Harkey will be trying to keep the 49th under Republican control, but in the general election she’ll be facing off against Democratic candidate Mike Levin.

Levin, 39, who was formally endorsed by President Obama earlier this month, has never held elected office before. His career so far has been as an attorney and activist focused on environmental issues and clean energy and serving as a fundraiser and supporter for the Democratic party. Born in Inglewood to a Latina mother and Jewish father, he’s lived in SoCal most of his life. He founded CleanTech OC, a renewable energy trade association, and worked with FlexEnergy on projects to capture methane from landfills to turn it into power. At a 2017 town hall meeting, he famously had a showdown with Representative Issa, asking “Why do you blindly follow Trump in gutting the EPA and ignore science?” and handed the congressman a book on climate change, according to OC Weekly.

Like the nearby 49th, CA-50 has been going through demographic shifts in recent years, but it’s remained an even more solidly red dot on California’s map than Issa’s district. Hunter carried his seat with commanding margins in 2014 and 2016 (71 percent and 63 percent of the vote, respectively). So what could possibly put his re-election in jeopardy now? Maybe an indictment in a corruption scandal. He lived a lavish lifestyle, allegedly paid for with misappropriated campaign funds, and may have filed thousands of dollars in personal purchases as charitable contributions. By the time the charges came down on Hunter in August, it was already too late to change the November ballot, so if voters turn out, they’ll have to choose between a Republican candidate who’s been indicted or his Democratic challenger, Ammar Campa-Najjar.

Campa-Najjar, 29, is a Mexican-Palestinian-American who worked on the 2012 Obama campaign and in the White House, served as communications director of the United States Hispanic Chamber of Commerce, and has been a grassroots organizer around his home of San Diego. Among issues he has made central in the campaign are immigration–he supports comprehensive reform that includes DACA protection–environmental protection, and job training and growth programs which should go over well in a district where unemployment is currently more than twice the national average.

Identified as one of the Democratic Congressional Campaign Committee’s targeted districts for 2018, Republican representative Dana Rohrabacher is running to stay in the seat he’s occupied since 1989. That hasn’t been easy for him, as he’s had to fight off investigations into his dealings with the Kremlin. And then there’s been the blowback in the wake of Rohrbacher being filmed going along with a Sacha Baron Cohen bit on the Showtime series Who Is America? that resulted in Rohrabacher having to release a statement that actually reads, in part, “At no time did I endorse training toddlers in handling guns,” as New York reported.

Running against Rohrabacher is Democrat Harley Rouda, who narrowly squeaked out a primary win. Rouda, 55, is a Laguna Beach businessman who has worked primarily in real estate development. He self-identifies as a former Republican who has shifted his party loyalty in recent years, which may resonate with a significant cohort of voters in this affluent, historically Republican district. Rouda seems to be hoping to tie Rohrabacher to Trump, with a section on the Rouda campaign site dedicated to holding the president accountable and pushing the investigations into the White House forward.

Back in January, Fullerton-based Ed Royce announced he wouldn’t be seeking a 14th term in a Twitter post, which came as a surprise to Republican leaders, according to the Los Angeles Times. But, while the timing may have been abrupt, the decision to avoid a 2018 race couldn’t have been too shocking–the district was already trending blue before Hillary Clinton carried it by eight points in ’16 and Democratic challengers were lining up to take Royce on. Instead, it will be Young Kim–a businesswoman and former member of the California State Assembly–who will be representing the Republicans against Democratic candidate Gil Cisneros.

Cisneros, 47, battled against fellow Democrat Andy Thorburn to earn his spot in the top two coming out of a primary campaign that Politico described as “the weirdest race in the country.” There was a risk that there might be no Democratic candidate on the ticket because the vote was split in too many different directions, and some $10 million were spent on the race by primary day. Cisneros put in a considerable stash of his own money, which the Navy vet-turned-philanthropist had to spare from a $266 million lottery win back in 2011. Despite the strange series of events that got him into the general election, Cisneros seems committed to seeing it through and advocating for policies including tougher gun control, protecting Dreamers, and regulating puppy mills.

RELATED: Rep. Lieu Says He Struggled Not to Use “Swear Words” in Trump-Putin Statement

Ticketmaster’s Taylor Swift Mess Is So Bad, Even Congress Noticed