Home Dance Next School Year, This Local Program Will Teach 10,000 Kids to Dance 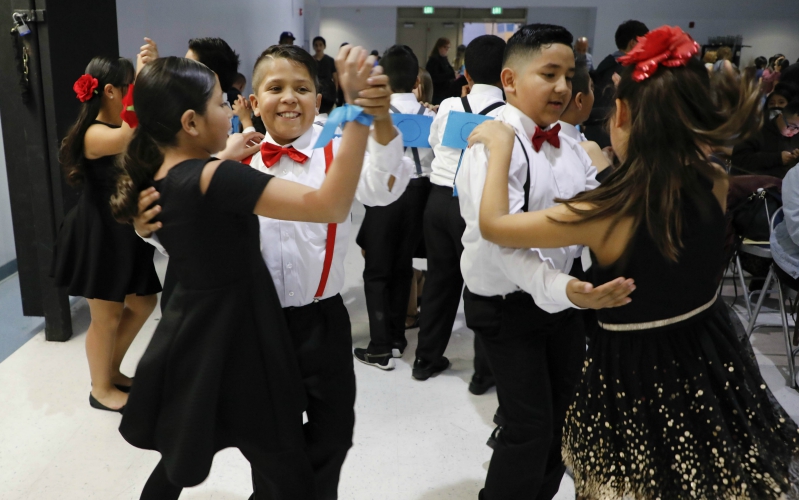 Brad Gluckstein, owner of downtown Los Angeles music venue the Conga Room, estimates that 20 years down the road, the average fifth grader will remember approximately four things from that fleeting part of her life. He feels confident that if she happened to have participated in the ten-week Conga Kids program, learning to dance will be one of those memories.

“This will be indelible,” Gluckstein says. “Even if they think of it as ‘that damn dance program I had to take,’ they’ll do it with a twinkle in their eye because they learned how to dance.”

The non-profit known since 2016 as Conga Kids has been going into schools in underserved areas in and around L.A. since 2011 and teaching teamwork, discipline, and self-confidence through dance. Originally an offshoot of the New York City program that spawned the 2005 documentary Mad Hot Ballroom, the Conga Kids curriculum has since been crafted to suit L.A. by eliminating waltz and replacing it with salsa. Over the course of ten weeks, kids also learn swing, tango, merengue, and fox trot.

During the 2017-2018 school year, Conga Kids went into more than 50 schools in seven local districts—L.A. Unified, Lynwood Unified, Mountain View, El Monte City, Pomona, Beverly Hills Unified, and Compton Unified—and reached more than 6,000 kids over the course of two sessions, fall and spring. The organization estimates that next school year roughly 10,000 fifth graders will participate in the program. The most recent session culminates with the Conga Kids Spring Dance Championship at L.A. Live on Wednesday, May 23, in which 170 participating students compete for bragging rights and a massive trophy.

Learning dance steps and competing with fellow students is only part of the point. Several school principals have written effusive testimonials that appear on the program’s website. “I can’t begin to tell you how much life, hope, and inspiration your program has brought to my school community,” writes Cristina Munoz of Euclid Elementary School in Boyle Heights. “My students who are struggling academically have found their voice. One of the girls who is on our competition dance team is scheduled to be placed in a special day program next year.”

Gluckstein says he’s personally witnessed student transformations. He recalls a neurologically atypical kid in Pomona who “came alive” while participating in the program. His aptitude for dance changed the way he perceived himself, as well as the way other kids perceived him. “They no longer saw him as a special-needs kid anymore,” Gluckstein recalls. “The teachers and parents told us nothing had touched him so deeply; he found his calling through our program.”

Part of the power of Conga Kids is its inclusivity. The entire grade participates in the program and the dance instructors visit during the school day, which makes it more accessible to kids who might otherwise not be able to participate after school for any number of reasons.

Like any other non-profit, Gluckstein says the program’s greatest need is funding, particularly from corporations and high-level individual donors. “We haven’t even talked about obesity and physical activity,” he says by way of touting the program’s broader impacts, although he concedes that’s not even his favorite aspect. That would be conflict resolution.

RELATED: These Creative Movement Classes for Non-Dancers Will Make You Forget You Can’t Dance

Every Year, This Woman Helps Keep Millions of Angelenos Entertained