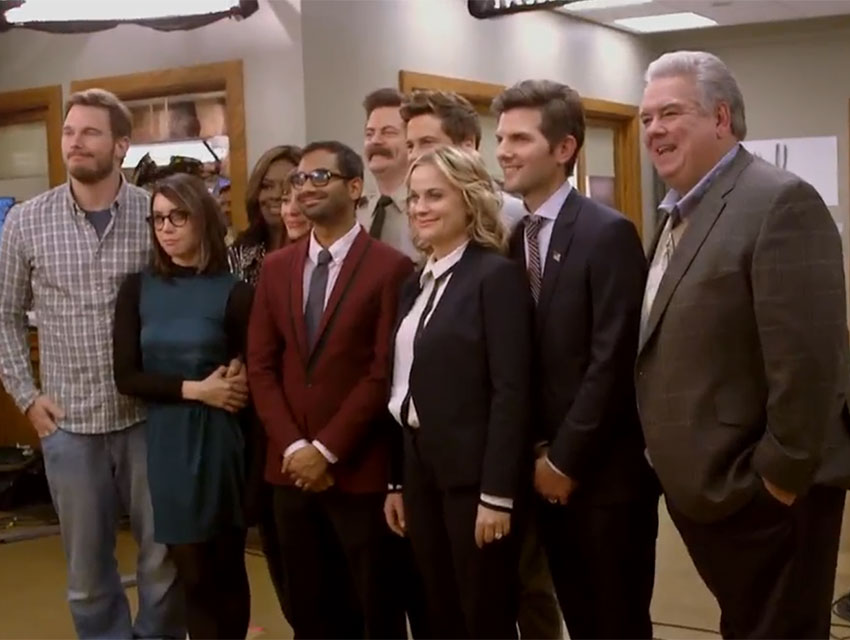 I was heartbroken to have to bid adieu to Parks and Recreation last month. The NBC series had become one of my favorites over the years and I was just not yet ready to say good-bye to the Pawnee Parks Department team. I’m still not, so I compiled a list of 21 of the show’s most memorable and noteworthy locations, all of which can be found in Los Angeles. While the series was set in the fictional Pawnee, Indiana (a city that is “First in Friendship, Fourth in Obesity”), Parks and Rec was actually lensed in Southern California. It is at Pasadena City Hall that Leslie Knope (Amy Poehler), Ron Swanson (Nick Offerman), and the rest of the Parks and Recreation Department gang reported to work each day and where many “workplace proximity acquaintances” were formed. Pawnee’s most hated building, the Library Department—aka “the worst place in the world,” where Ron’s ex-wife, the dreaded Tammy Swanson (Megan Mullally) works—is located just down the street from Pasadena City Hall. In real life, the building is the city’s Permit Center. The first two seasons of the show centered around an abandoned pit dug by a developer who had gone bankrupt. The pit was actually created by the Parks and Recreation production crew at a vacant 1.6-acre lot in Van Nuys. While the land remained undeveloped for quite some time, there is now, sadly, construction taking place on the premises and the site is no longer recognizable from its P&R days. The residence where Leslie’s BFF, Ann Perkins (Rashida Jones), lived is located directly behind the Sullivan Street Pit. Though it was leveled by the Very Good Business & Development Company to make way for the Morningstar apartments in Season 7, the pad is still standing in real life and looks much the same as it did on the series. The Craftsman-style home where Leslie lived during her single days can be found on a sleepy street in Altadena. In the Season 2 episode aptly titled “Leslie’s House,” Knope hosted a dinner party at the residence and it is discovered that she had some major hoarding tendencies. Though the structure used for establishing shots of Pawnee’s favorite waffle house (and the “unofficial meeting place of Pawnee’s political elite”) is located in Atlanta, interiors were filmed at the Four ‘N 20 restaurant in Sherman Oaks. The eatery, which does not serve waffles in real life, was featured countless times throughout P&R’s seven-season run. Pawnee’s local zoo, where Leslie hosted a wedding ceremony for two male penguins in Season 2’s “Pawnee Zoo,” is actually the Old Zoo in Griffith Park. The site was established in 1912 and remained in operation until the new zoo opened up the road in 1965. The property’s former animal enclosures and habitats were left intact after the closure and still stand today. Though abandoned, the former zoo is accessible to the public and is one of my favorite places in the city. The Oxwood Inn in Van Nuys served as the exterior of Pawnee’s local gay bar, The Bulge, where Leslie was the guest of honor at a party in “Pawnee Zoo” and where Leslie and Ben (Adam Scott) took Ann and Chris (Rob Lowe) after crashing their date in Season 3’s “Go Big or Go Home.” Interior scenes from both episodes were shot at Serra’s Dine and Dance in Studio City. The storefront that housed Tom Haverford’s (Aziz Ansari) first successful business venture, a high fashion rental store for teens, can be found on Ventura Place in Studio City. The space first popped up in Season 5’s “Pawnee Commons” and was then featured regularly in subsequent episodes. The adjoining storefront masked as the Pawnee VideoDome/XXX Adult DVD Emporium in Season 5’s “Bailout.” Delancey pizzeria in Hollywood masked as Tom’s second successful business venture, the upscale Tom’s Bistro. While the interior of the space was used in Season 6’s “New Slogan,” a set based on that interior was later built for all subsequent filming. Leslie and Ben lease a home together in Season 5’s “Halloween Surprise.” It is there that Ben proposed to Leslie while standing in the home’s vacant living room in that same episode. By Season 7, when the show’s timeline jumped ahead three years, the couple had moved to a new pad in Studio City. In the series finale, Ben and Leslie are shown living in Washington, D.C. That house can be found at 4109 Mary Ellen Avenue in Studio City. When Pawnee’s last remaining telephone booths were removed in Season 4’s “Smallest Park,” Leslie and Ben proceeded to build Indiana’s smallest park on the 0.000003-square-mile patch of concrete that is left behind. It is at the park that Leslie and Ben later rekindled their romance in one of the series’ most poignant moments. The local hospital where Ann worked as a nurse and where countless antics took place throughout the series’ seven-year run is actually the Providence Saint Joseph Medical Center in Burbank. Indiana’s popular dinosaur-themed restaurant Jurassic Fork (not to be confused with “Schindler’s Lunch,” a German eatery owned by the same Steven Spielberg-loving restauranteurs), was portrayed by Clifton’s Cafeteria in downtown L.A. The historic site, which was originally founded in 1935, was shuttered for a large renovation project three years ago, but is finally set to re-open in the near future. 15. The Quiet Corn
Real location: 314 Adena Street, Pasadena In Season 3’s “Camping,” the Parks gang ditched out on a staff camping trip in order to check into a local bed and breakfast run by harpsichordist/cat aficionado Elsa Clack. One of Pasadena’s oldest surviving homes, a 3,098-square-foot Queen Anne-style residence known as Mansion Adena, made an appearance as the The Quiet Corn in the episode. 17. April and Andy’s House
Real location: 12718 Valley Spring Lane, Studio City A picturesque ranch-style home in Studio City served as the longtime residence of April Ludgate (Aubrey Plaza) and her husband, Andy Dwyer (Chris Pratt), from Seasons 3 through 6. In Season 7’s “2017,” the couple spontaneously decided to move to what was once a holding cell for insane assembly line workers from the Pawnee Doll Head Factory. The interior of this residence also served as the interior of Leslie and Ben’s home in seasons 5 and 6. The property, said to be located in Pawnee’s “creepy warehouse district,” is at 837 Beacon Avenue in Westlake. 18. Scully’s Bar
Real location: 219 N. Central Avenue, Glendale Clancy’s Crab Broiler in Glendale, which was originally established in the 1950s, popped up as two different eateries on Parks and Recreation. It first masked as Scully’s Bar, where Tom and Mark Brendanawicz (Paul Schneider) went to “hit on chicks” in Season 1’s “The Banquet,” and later appeared as O’Shay’s, where Leslie threw a pizza party for Pawnee policemen in Season 3’s “Ron & Tammy: Part Two.” It was outside of Clancy’s that Ron and Tammy got back together in that same episode. In Season 2’s “94 Meetings,” Leslie fought to save one of the most beloved historical sites in Pawnee, a gazebo located on the grounds of the Turnbill Mansion. That gazebo does not exist in real life (it was a set piece), but the Tudor-style mansion can be found in Pasadena. Though the estate is not easily visible from the road, its front gate, which Leslie chained herself to in the episode, is accessible and looks much the same as it did onscreen.  All photographs are screen grabs from Parks and Recreation