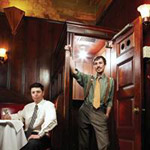 From the window of his small attic office, which overlooks the dining room at Musso & Frank Grill, Jordan Jones can just make out the dilapidated wallpaper looming above the restaurant’s dark wood booths. The scene—or what’s left of it—on the walls depicts men hunting, men golfing, and men fishing in a pond, all surrounded by trees and the warm colors of autumn. “It’s always described as the French countryside, but I see more Ernest Hemingway,” says Jones, who sports a goatee and is given to wearing suspenders with his suits. The 30-year-old recently assumed the responsibility of running Hollywood’s oldest restaurant, and one of his earliest tasks was to restore the wallpaper. At any other restaurant this would be seen as basic maintenance. At Musso & Frank, the move has bordered on sacrilege.

“I’ve had people come to me crying, ‘You can’t clean the wallpaper! There’s 70 years of historic tobacco smoke on there!’?” says Jones. “That’s when you’ve just got to sit back and know that you’re not going to please everybody.” Jones has found that even the smallest decisions have been cause for angst at Musso’s, which turned 91 this year. The infrastructure is tired (the 4,000-pound water heater that recently sprang a leak dates from when Sam Yorty was mayor), and the menu has hardly been updated in decades. Which has left the restaurant in a quandary: How to join the 21st century without ruining the Old Hollywood ambience?

A classic American grill, Musso & Frank is the kind of place where Jell-O gets its own line on the menu and the presence of calf’s liver and lamb kidneys has nothing to do with eating nose to tail. Creamed spinach, crab Louie, sand dabs meunière, and other antiquarian standards have been served here since they came into vogue. Judging the food on quality—which oscillates between satisfyingly familiar and mediocre, depending on the dish and how many martinis one’s had—would be missing the point. This is what your grandparents were raised to think of as fine dining, and there’s still something about the lacquered wood and the white tablecloths that puts kids on their best behavior. The two dining rooms are packed with a mix of regulars—septuagenarians who’ve been ordering flannel cakes and diplomat pudding since their childhood—Mad Men fans, and people wanting to see where Grandma once ate beside Orson Welles. Clad in red Eton jackets, many of the bartenders and servers have been doling out perfect manhattans (accompanied by a chilled carafe of refills, naturally) for 30-plus years.

The restaurant has been in Jones’s family almost from the beginning. In 1919, Joseph Musso and Frank Tulay opened Frank’s Café near the corner of Hollywood Boulevard and Las Palmas Avenue. It later became Frank’s François Café and then Musso & Frank Grill, which in 1927 was purchased by two Italian immigrants: John Mosso, Jones’s great-grandfather, and Joseph Carissimi. The two watched as Musso & Frank became a second home to half of Hollywood Forever’s future residents. The Back Room—a small space leased on a handshake from the Vogue Theater next door—was a favorite of such writers as F. Scott Fitzgerald, William Faulkner, and Budd Schulberg before the Vogue reclaimed it in the middle of the century.

After Mosso died in 1974, his only daughter, Rose, oversaw the business with Joseph’s daughter-in-law, Edith Carissimi. Edith worked the front of the house while Rose could be found almost every day in the kitchen, dressed impeccably in pearls, making sure the food looked just as good. “My grandmother would bring me through the kitchen, and all the guys would call me ‘boss,’?” says Jones, who grew up in Las Vegas. “They called all the little grandkids boss, figuring, ‘Well, we’ll be right about one of them.’ But I always remember thinking, ‘It won’t be me.’?”

Jones was away at college in Colorado when Rose died in 2000, and no one from either family had the time to manage the restaurant with Edith, who was in her eighties. But after a few postgraduate years of wandering, doing nonprofit work in Third World countries, he started to feel the tug of the family legacy. On a 15-hour bus ride across Guatemala he decided to make a go of it. Jones called home and asked his family if he could help run Musso & Frank. “They said, ‘Absolutely,’?” he says.

“Not quite,” says Jones’s uncle, John Echeverria, a Sacramento-area attorney who assisted with business matters after Rose was gone. “We said, ‘If you go to school.’?”

So Jones rented a house in L.A. in 2004. He enrolled in the California School of Culinary Arts in Pasadena to study restaurant management and began busing tables at Musso’s, something he’d do for the next five years. Tray in hand, he chatted up the regulars, who impressed upon him how important the restaurant was to them. “When you come here, the troubles of the world just disappear—it embraces you with historical serenity,” says Martin Townsend, an 85-year-old retired schoolteacher who’s been dining at Musso & Frank once a week for the past 50 years. (“I made good investments,” he says.) But even Townsend acknowledges that some updates are in order. “You need to bring younger people in,” he says. “Us regulars, we’re no spring chickens, you know. Anything that brings new blood in here is always good, but never at the expense of what Musso’s really is about.”

One Sunday each month the restaurant is converted into a conference room, where ten members of Jones’s family set up projection screens and unfold their laptops to discuss business. Since buying out Edith last October, the family named Jones manager. He begins sharing duties this month with Echeverria’s son, Mark, who’s leaving behind a job at Northstar-at-Tahoe Resort. “The thought didn’t really cross my mind until a few months ago,” says Mark, who’s one month younger than his cousin. “It dawned on me—I’ve got something here that is so rich with what our family is and who we are as people. It was a snap of the fingers.” Jones might float ideas, but a vote is required before even the slightest adjustments can be made. His inaugural move? “I dimmed the lights in the ‘new’ room,” he says, referring to the dining room with the bar that opened in 1954 when the Back Room closed.

Bars across the country have been straining to replicate what Musso’s has naturally: patina—and a spot-on sidecar. But until last fall the doors at Musso’s would close before most of Hollywood had shaken off the previous night’s hangover. That’s when Jones pushed closing time from 11 p.m. to 2 a.m. on Fridays and Saturdays. More radical, he piped in music, a first in Musso’s history. The soundtrack—Billie Holiday, Ella Fitzgerald, Duke Ellington, and the like—was picked by Jones and broadcast through speaker boxes created by a Hollywood prop master to look identical to the 1954 originals. Jones also put more labels on the wine list, and he’s hired the same woman who helped restore the Pantages Theatre to work on that wallpaper.

“The important thing is to take it slow and not try to change that place all at once,” says Cedd Moses. The nightlife impresario has spent the last decade rehabbing neglected historic spaces downtown and turning them into destinations, like the French dip joint Cole’s. “I always like places that have been around awhile, that have character,” he says. “With Cole’s, our goal was to make it look exactly the same when you’re seeing it as an outsider. But behind every piece of old furniture and wood paneling are brand-new systems and infrastructure that will allow the place to survive another hundred years.”

Jones has had a harder time bringing Musso’s into the digital age. A few months back the family decided to do away with handwritten checks. The inky scrawl is a charming touch, but without computers, it’s almost impossible for the business to know exactly how much of what is being sold or who is selling it best. “You cannot go into any restaurant in America and not see a point-of-sale system,” said Echeverria at a recent Sunday meeting. They reached a compromise by hiding four terminals in the kitchen to avoid disrupting the old-timey vibe. Now, however, they’re rethinking matters because the staff has to head to the kitchen twice as often. That’s not only hard on the waiters—many of them are pushing 70—but it increases the time that tables are left unattended. “You want your waiters to be on the floor as much as possible,” says Jones.

After all, the vintage staff is part of the appeal. Manny Aguirre has been mixing cocktails behind the bar for 20 years, and Johnny Depp often stops by to say hello, while Juan Ramos, who’s on a first-name basis with Elizabeth Taylor, has been making Caesars here for 37 years. Having each waiter assemble the salads is a carryover from a different era, and it’s another detail that has caused Jones to wring his hands. “Let’s say,” he explains, “somebody who isn’t a regular sits in Juan’s station one time and likes his Caesar salad”—Juan is known for being liberal with the pepper—“but they sit in somebody else’s station the next time and think, ‘Hey, this isn’t how I remember it!’?” Now the family is facing a dilemma: If they go for consistency by appointing a salad maker, they could disappoint regulars and some of the waiters who like to show off their lettuce-tossing skills. If they stay with the tried and true, they risk appearing spotty to newcomers, and waiters will continue to be stuck in the kitchen when they could be on the floor.