Home Uncategorized Coffee Clutch: Why We’re Sitting Down With The Mayor and Local Fashion... 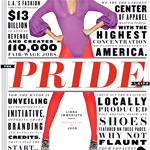 Was anyone surprised when it was discovered that this years’ US Olympic Team uniforms were made in China?  Some members of Congress were shocked and outraged, even demanding the outfits be burned. Clearly, these officials don’t shop at Target or read clothing tags.

And so the rumblings of a Made in the USA zeitgeist began. Creating jobs in America and boosting the nation’s economy became a hotly debated topic during the presidential race and it was on my mind heavily when I attended this years’ MAGIC trade show (the largest apparel sourcing trade show on the continent.)  I went with a mission, to find out how many companies produced their lines in the USA and how many of those were in L.A.  Turns out that finding L.A.-based companies was a lot easier than I thought.

Thanks in part to a grant, and a push by Mayor Antonio Villaraigosa, the first ever city-centric pavilion— “Made in L.A.”—debuted at MAGIC. There, buyers from 80 countries around the world could peruse L.A.-made goods all under one roof (25% of all exhibitors at MAGIC were from L.A.)  It was a proud display and it helped fuel the concept for our November issue style feature “The Pride of the City,” where each spread showcases clothing and accessories that were made right here in L.A. The issue happened to coincide with the launch of Villaraigosa’s Designed in L.A. initiative to further promote the industry.

Tomorrow morning, Los Angeles magazine is hosting a Breakfast Conversation with Mayor Villaraigosa and three panelists, Sam Ku, creative director of AG Jeans, shoe designer Calleen Cordero, and handbag designer John McDavid Lehman of RB of McD. I’ll be moderating the discussion as we explore the future of fashion in L.A.—what the city has, and what it needs, to help the apparel industry further lead the nation in job creation and economic growth.

Just how big is the fashion industry in L.A.? Check out these quick stats:

We’ll be discussing these facts and much more and will post a full report following the event.